A sinister novel based on the true Bloody Benders, a family of serial killers from the Old West bound by carnage and darkened by the shadows of American history.

The winds shift nervously across the Kansas plain whispering of travelers lost and buried, whispering of witches. Something dark and twisted has taken root at the Bender Inn.

At first, the townspeople of Cherryvale welcome rising medium Kate Bender and her family. Kate’s messages from the Afterlife give hope to her tedious dreams and her mother’s potions cure her little ailments, for a price. No one knows about her other business, the shortcut to a better life. And why shouldn’t her family prosper? They are careful. It is only of those who are marked, those who travel alone and can easily disappear, that the Benders demand their pound of flesh.

But even a gifted psychic like Kate can take a wrong step. Now that the secrets festering beneath the soil in the family garden threaten to ruin them all, the Benders must hone their craft or disappear themselves.

Although little is known about the Bender family, the author camilla bruce offers a new take by compiling rumours, snippets and guesses to deliver All the blood we share.

Although the author claims that the book is mostly fiction, there are enough elements of truth to make this a chilling horror story. The “Bloody Benders of Kansas” would be identified as serial killers by modern standards. Their reign of terror took place in the late 19th century, but it was only after they left their farm that the bodies were discovered.

Usually in a story, there will be a character that gets empathy from the readers. In this case, all four family members were beyond redemption. The only question is which was the worst. Was it Kate who pretended to be a spiritualist and lured the travelers to their deaths? Was it John with his trigger-happy temper and no remorse? Was it Mr. Bender and his desire for more money? Or was it Mrs. Bender, the one who always disagreed with Kate?

To balance out the nastiness, the story also includes innocent people affected by encounters with the family. It is through them that the community comes alive. In the center are the local merchant and the young man who becomes a newspaper reporter.

All the blood we share sheds light on an infamous family that terrorized a Kansas community and disappeared without a trace. The details shared by the author serve as a plausible way to fill in the gaps in the story. 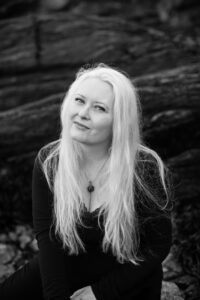 camilla bruce He was born in central Norway and grew up in an ancient forest, next to an Iron Age burial mound. She has a master’s degree in comparative literature and has co-directed a small publishing house that published dark fairy tales. Camilla currently lives in Trondheim with her son and her cat.