I usually don’t have my best ideas during my kids’ bedtime. Putting three kids to bed is more perspiration than inspiration: dinner, bath, pajamas, books, sip of water, bath. No, you can’t sleep with your shoes on. One more sip. You get it.

On this particular night, my oldest son remembered that he had a speech to give the next day. The theme was, ‘Why children should rule the world!’

However, I immediately knew that this speech was different. My son was excited about that like no other speech before. They had discussed it in class and he was bursting with ideas.

His classmates also had ideas. Free lollipops from the canteen, longer school holidays, slides at the classroom entrance! But also, action on climate change, protection of animals in danger of extinction and strategies to save the Great Barrier Reef!

Of course, I thought. Children love to be the boss. Actually, who doesn’t love power? World wars have been fought over it.

And maybe the children in charge wouldn’t be so bad after all?

My brain had started to work. Was there a story in this?

Not yet. But my antenna was up.

The “what if” moment came soon after when I saw Ivanka Trump appear at a meeting of world leaders on behalf of her father. What if she had been a girl, replacing her father as president? I had this image of this little girl sitting at a table with all these world leaders.

Then, of course, I saw reports of our own prime minister making a rather ill-timed trip to Hawaii. A prime minister who loved wearing Hawaiian shirts and playing the ukulele.

The personal and the political merged. She had a story idea. 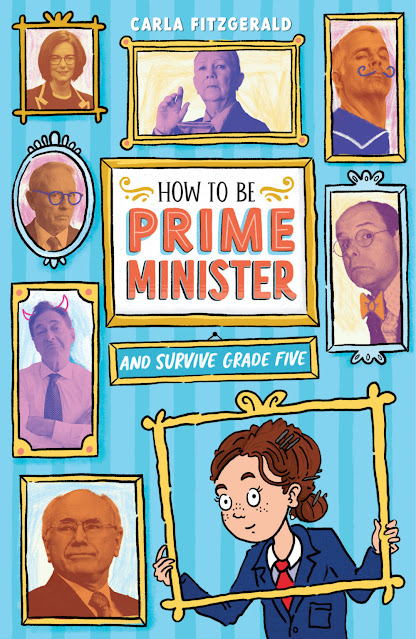 How to be prime minister and survive fifth grade is the story of an eleven-year-old girl, Harper, and her father, who happens to be the prime minister. Unfortunately, Harper’s father is terrible on paper. Soon his family is a laughing stock and Dad disappears at a ‘conference’, leaving his phone behind. With her little sister, Lottie, Harper must secretly take her place and decide on a new policy before it’s too late.

Harper is torn between ideas: should she ban plastic bottles? Or make the weekends longer? Will he be able to prove that a child can lead the country better than an adult?

This experience reinforced that ideas can come from anywhere. The inspiration for this story came from my own home and from an event that happened on the other side of the world. I think it’s very important for writers to catch ideas when they appear. My phone’s notes section is full of my attempts to nail down story ideas:

What does it mean to be good?

No one else would have any idea what I’m talking about! And maybe I don’t either, but that’s okay. I know that some writers prefer to use notebooks or journals to record ideas, which seems much more authoritative. Unfortunately though, the phone is often the closest thing to me and it’s important to put it down before I get distracted by something else.

The other thing to mention is that ideas often evolve and become better when feedback from others is accepted. Not just any feedback, but feedback from those you trust, at the right time. I was lucky that Clair Hume and the wonderful editors at UQP understood what I was trying to do and had their own ideas to improve it.

Carla Fitzgerald is a writer, recovered lawyer and mother of three from Sydney. She studied arts and law at university before working for a judge, in private practice and at the Australian Human Rights Commission. Only after that did she rediscover the great fun of inventing things and writing them down. Carla is a role model for Books in Homes and a trainer for the Harding Miller Educational Foundation. Her favorite activities are writing, walking, reading, eating, and hanging out with her family. Not in that order.