‘You learn things about yourself’ – the road ahead for Stuart Dallas, Leeds’ once unbreakable warrior

Leeds United have spent all season wishing that every footballer was built like Stuart Dallas. Players are prone to dropping like flies at Elland Road but Dallas was the machine, the indestructible outlier in their squad. Count back through the club’s last 122 league matches and Dallas has started 121 — incredibly durable and too dependable to drop.

They joke at Leeds about the toe injury Dallas has been carrying for years, something he learned to play through long ago, and he has a knack for riding niggles and bruises. “Stu won’t mind me saying he plays through injury most weeks,” Adam Forshaw told The Athletic In January and with a month of a brutal season to go, it seemed that Dallas might be the man who the bringer of bad luck ignored.

Then came Saturday and his first-half challenge on Jack Grealish, a tackle that came late and caught Grealish heavily after the ball had gone. Dallas soaks up most things but in real-time, this felt different. The sight of him hitting the ground in pain and a stretcher appearing on the pitch were indicators of what had happened. He wore a smile as wide as the Irish Sea after Leeds and Manchester City played this time last year, scoring the goal that contributed to a pile of player of the year awards. By full-time on Saturday, he was in Leeds General Infirmary awaiting bad news.

A femoral fracture very close to the knee in his right leg means the season is over for Dallas but in the aftermath of Saturday’s defeat to City, and as details of his injury filtered through the next day, the 31-year-old’s well-being took precedence over the effect his absence might have on Leeds’ fight to stay up.

The team are in a street fight in the Premier League and Dallas has the character for such a scrap, but Leeds have come to think the world of him, as a club and a crowd, and sympathy for him resonated. “I know he’s going to be missed,” said head coach Jesse Marsch, “but you have to think first about the person, the type of injury, and hope that he’s going to be OK.”

Broken and fractured femurs are unusual in professional sport and very rare in football. Premier Injuries, a website that monitors injuries sustained by top-flight footballers in England, has only one other case in its records, that of ex-Crystal Palace defender Pape Souare, whose occurred in a car crash in 2016. Danny Higginbotham, the former Manchester United and Stoke City center-back, fractured a femur when he was 17 and says that in all the years since, Saturday was the only time he had read about a player suffering something similar. “Dallas is the second person I know,” Higginbotham says. “The other one was me.”

Dallas stayed overnight at the hospital on Saturday before being transferred to London by ambulance on Sunday for surgery and further scans. The impact of the collision with Grealish meant there was a risk of knee ligament damage alongside the fracture, though Leeds are yet to confirm the full extent of his injury or the likely timescale for Dallas’ recovery. A statement over the weekend said the Northern Ireland international was facing “a lengthy period out”.

Jamie Arbuthnot, a specialist knee surgeon who provides services for Aston Villa, says his first concern as Grealish’s left knee struck Dallas’ right was the effect on Dallas’ ligaments. “He’s got his foot planted when it happens, so the ligaments are what you’d automatically be wary about,” Arbuthnot says. “But a lot will depend on exactly where the femoral fracture is and how close it is to the knee itself — whether it’s low down the bone and going into the joint, or whether it’s mid-shaft. That will dictate exactly what they’re looking at.

“The femur’s a very strong bone, so generating the kind of force to fracture it tends to take something like a vehicle collision or a bad fall. You see it in cyclists, too, but the more serious tend to come from car crashes, from that really severe impact. Because the femur’s a very big bone, it can take a long time to heal. A finger bone can take four to six weeks. Your wrist can take six to eight weeks. The femur’s very different.”

In Higginbotham’s case, his comeback took around six months. The cause of his fractured femur was not unlike the incident at Elland Road on Saturday: Higginbotham clearing the ball and an opposition player caught him in an attempt to block the clearance. “It would have shattered my knee but because I was still young, the growth plate in my knee made (the damage) go up my femur,” Higginbotham says. “I got a horseshoe crack in the femur and had loads of screws put in.” Then a youth-team player with Manchester United, the treatment worked and Higginbotham went on to play more than 400 games professionally.

Dallas is at a more advanced stage of his career: into his 30s and nearing the end of his seventh season with Leeds. Over time, he has carved out a niche as the most versatile of footballers who can perform well almost anywhere and hold down a position week after week. There were periods before the appointment of Marcelo Bielsa when it was not clear where Dallas was supposed to fit and his first year under Bielsa was a slow burn too, but over time, the answer was wherever Bielsa asked him to. For a while, Mateusz Klich was seen as the player Bielsa could never drop but in the end, that tag belonged to Dallas.

Dallas has the protection of a contract running to 2024, a deal signed last summer, but it will be difficult so soon after Saturday for Leeds to predict exactly when he will play again. Marsch is likely to provide more details at his press conference before this weekend’s game against Arsenal, once Dallas’ surgery is complete and the picture is clearer. Dallas is still in London and was accompanied there by Rob Price, Leeds’ head of medicine and performance.

Price is a physio who has experience with major injuries to that part of a player’s leg. He was in charge of Hull’s medical department when Robert Snodgrass, the ex-Leeds winger, dislocated a kneecap in a game between Hull and Queens Park Rangers at Loftus Road in 2014. That was not the result of impact but Snodgrass and Dallas both suffered major Knee injuries, affecting different bones but liable to cause multiple areas of damage around the same joint. Where Snodgrass was unlucky, and where Dallas and Leeds are hoping for better news, was in the destructive effect the dislocation had on his ligaments.

Snodgrass, now at Luton Town, was watching Saturday’s game between Leeds and City and saw Dallas’ tackle on Grealish. “With me, all that happened was Joey Barton put a bit of pressure on my shoulder, leaning on me as he tried to win the ball,” Snodgrass says. “I turned out of the tackle and my knee went under me. I actually tried to come back on but once I stepped up onto the ledge by the pitch, I felt the pain and realised there was no chance. My knee had swollen to about three times the normal size.

“With Stuart and Grealish, it’s a collision between them but as soon as I heard what Stuart had done, the first thought that went through my mind was the time it’ll take for him to get back. Fingers crossed the injury’s clean because in my case, it was far from clean.” 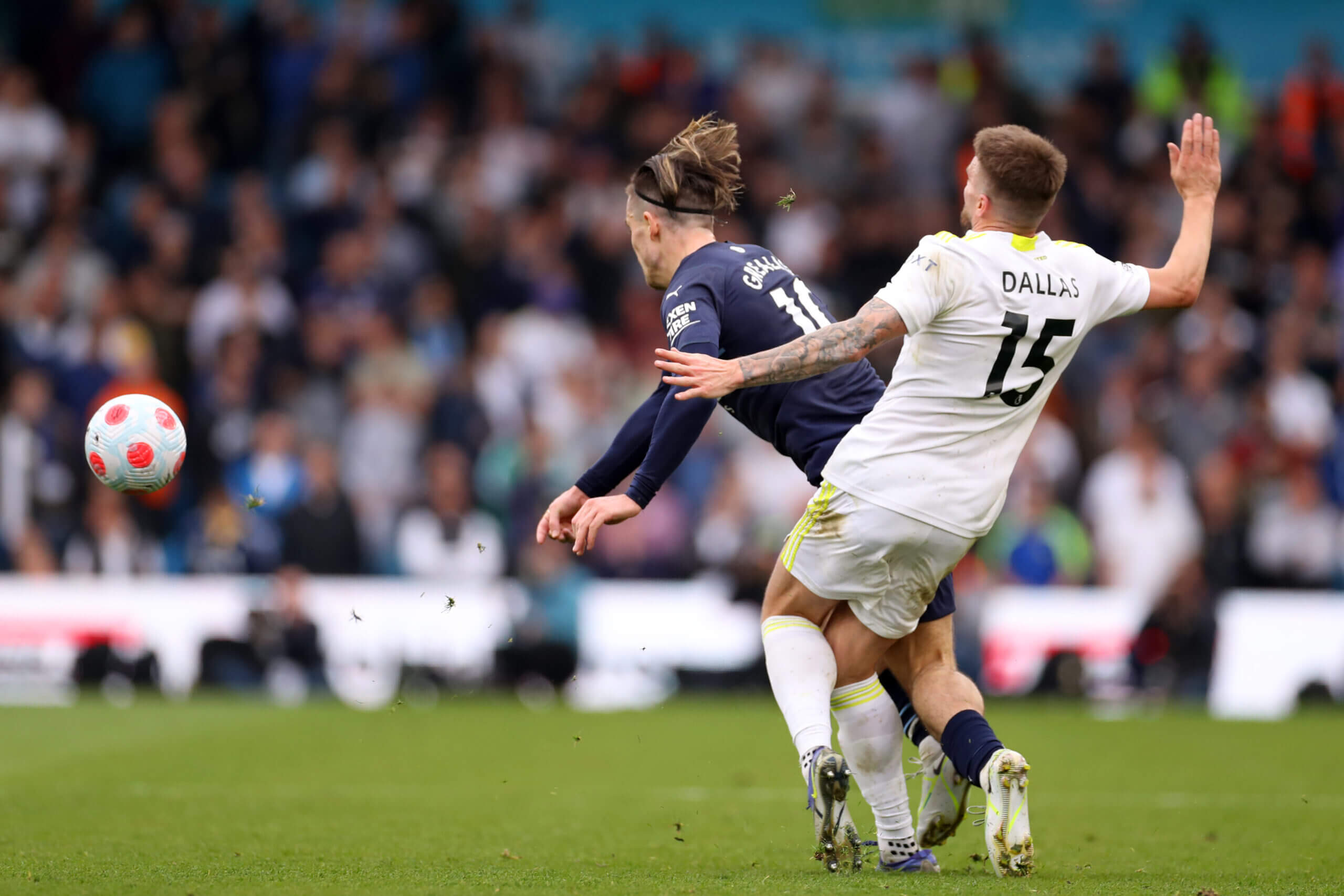 The initial prognosis of Snodgrass’ knee set his recovery time at six months.

“What nobody knew at first was that, apart from my cruciate, all my ligaments were gone,” he says. “I went for the first operation thinking I was looking at four to six months but by the time I woke up, the surgeon was saying it would be more like 12 to 18. The cartilage had ripped away and there was nothing behind the patella. Once the surgeon got in there, he was able to see what was really going on — and it wasn’t good.”

Dallas’ operation in London has been handled by Andy Williams and Khaled Sarraf, two specialists in knee surgery. Williams was also responsible for operating on Snodgrass’ knee injury eight years ago. Snodgrass was hurt on the first day of the 2014-15 Premier League season, shortly after a £6 million move to Hull from Norwich City. His comeback appearance came in December 2015, 17 months later.

“The surgeon was pretty honest with me,” Snodgrass says. “He told me that if I got back to any sort of level, I’d be doing well. That really stuck with me. I’m hoping Stuart will get back fine and I’m sure he will. He might not have anything like the damage I had but you do have those thoughts in your head. Six months in, I was thinking, ‘Where do I turn here?’, because rehab is the same stuff over and over. All you want is to know that you’re going to play again and when.

“The best thing I did during my rehab was get away to Scotland for a month, for a change of scenery and some time with my family. I went back to Hull feeling really refreshed. It was my dad’s 70th birthday on the day when I got injured. We had a full-on party planned and I never made it.”

Price oversaw Snodgrass’ recovery at Hull, from start to finish. Ruben Crespo, Leeds’ rehab and conditioning coach, was also part of the team who worked to bring the winger up to full fitness. “Stuart’s in really good hands,” Snodgrass said. “One of Rob’s big strengths is his ability to deal with lads who are injured on a personal level, to be honest with them but also to understand how they’re feeling. The guys at Hull played a massive part in getting me through it.

“Rehab means long hours, getting home at seven or eight o’clock at night, stinking of chlorine after more time in the pool, your third session of the day. It can feel never-ending when you’re in the middle of it but looking back now, I learned things about myself and my body while the rehab was going on. I’ve benefited from some of that.”

Marsch described Dallas as the “heart and soul” of the squad at Leeds and it is not difficult to find other people who speak about him in the same way. The tackle on Grealish, a lung for the ball as the City player cut in off the touchline, struck a chord Snodgrass because he saw in the past what Elland Road does to a player’s psyche.

“The atmosphere there, it makes you full-blooded,” Snodgrass says. “You go into tackles in the way Stuart did because the noise and the intensity put your heart on your sleeve.”

It has always been easy to see the heart on Dallas, the consummate professional who looked like he would never break.

Three months on from a day of legal claims and counterclaims, the case of Jean-Kevin Augustin is still in the hands of the Court of Arbitration for Sport. In keeping