Whatever division Leeds are in, a thorough rebuild is needed this summer

By the end of the week that Leeds United bit the bullet and changed head coach, the cost of their absences was beyond extortionate. With 12 games still to play, the club had sustained twice as many injuries as the average Premier League team suffers over an entire season. Almost every player had missed minutes at some stage.

Now, a few weeks on, that trend is continuing. If anything, it peaked at Wolverhampton Wanderers last Friday with a spate of carnage that stretched their physio department: a damaged foot for Patrick Bamford, a back problem for Diego Llorente, a hip issue for Illan Meslier, concussion for Mateusz Klich and a knee- high tackle inflicting pain on Stuart Dallas. Five injuries in one night — the way it seems to be at Leeds.

As new head coach Jesse Marsch went through them one by one post-match, he took solace from the fact that none of the individual knocks or strains appeared to be particularly severe. Regardless, Marsch always intended to give the squad a meaningful rest through the international break now underway. This two-week interlude has been perfectly timed after back-to-back wins and at a point in the season when so many players need some downtime. The 48 hours after Wolves were taken up with medical scans and decisions about who was fit enough to travel abroad for international duty.

There is, though, nobody at Leeds who would deny the bruises and sacrifices were worth it. The past week has been colossal, a period that might prove to be season-defining at Elland Road.

From the depths of real peril, Leeds are suddenly on 29 points and much closer to a third straight year of Premier League football. They have ground left to cover to guarantee top-flight status for 2022-23 but are not so far from being able to think about how Marsch’s tenure will evolve beyond the short-term priority of survival. More positive results when the season resumes at the start of next month would give Leeds the freedom to step more confidently into forward-planning mode.

The unavoidable conclusion from this brush with relegation is that the squad at Elland Road was inadequately built for this particular season. It is too brittle and thin for comfort.

Leeds have been handicapped by an injury list a mile beyond the length of most but there is a chicken and egg debate around it — whether the absences have made the squad insufficient or whether an incomplete squad contributed to those injuries. Some would say both statements are true.

Summer transfer windows on Marcelo Bielsa’s watch were invariably measured events. He never changed the face of his dressing room too much in one go, but this close-season, irrespective of the division Leeds are in, will demand a more thorough rebuild.

Where, then, should attention be focused, particularly now that Leeds are about to build a team for Marsch rather than augment a Bielsa one?

As Bamford retreated to the bench in tears at Molineux on Friday night, dejected by aggravating a foot injury inside 25 minutes, it was hard not to think again about how makeshift Leeds have been up front this season.

It is becoming their first port of call for recruitment.

There are plenty of players at Elland Road who pass as forwards but few who look like full-blown center-forwards.

Sam Greenwood appearing as Bamford’s replacement at Wolves for only his second Premier League appearance was an example of their lack of depth. Too often, it has been academy players thrown in at the deep end, wingers pushed into the middle and goals in short supply.

Marsch’s early matches suggest that, much like Bielsa, Rodrigo is someone he wants in a role behind the No 9. That position is still Bamford’s domain, if only Leeds could raise him to a permanent level of match fitness.

Forty-five minutes on the pitch against Norwich City just over a week ago were enough to remind Elland Road how effective Bamford can be. A dependable, combative center-forward was not just a Bielsa requirement.

Leeds will need a fit Bamford next season, but it should be apparent by now that alongside the prodigious talent of Joe Gelhardt, they need proven competition that makes the position more easily interchangeable.

Bielsa was deeply unlucky to lose the spine of his team to injury from early December onward but the difficulty in replacing that is a glaring indicator of what Leeds have to do in the summer.

Where Rodrigo is concerned, there was a message for Marsch in what happened when he lost the Spain international to a thigh injury during that 2-1 win over Norwich.

Marsch’s answer was to replace him with Robin Koch, a defensive move that had the effect of bringing Norwich into the game in the last half-hour. The situation called for a more aggressive substitution — a like-for-like swap in the attacking midfield area. The club have been light there all season, ever since their failed bid to sign Conor Gallagher on loan from Chelsea in July. Their campaign has had a square-pegs-in-round-holes feel, crying out for additional match-winners.

Leeds have telegraphed the fact that when the summer window opens, they intend to make a fresh bid for Red Bull Salzburg’s Brenden Aaronson. US international appointment Aaronson joined the serial Austrian champions in 2020 while countryman Marsch was head coach there, so Elland Road was never likely to diminish Leeds’. 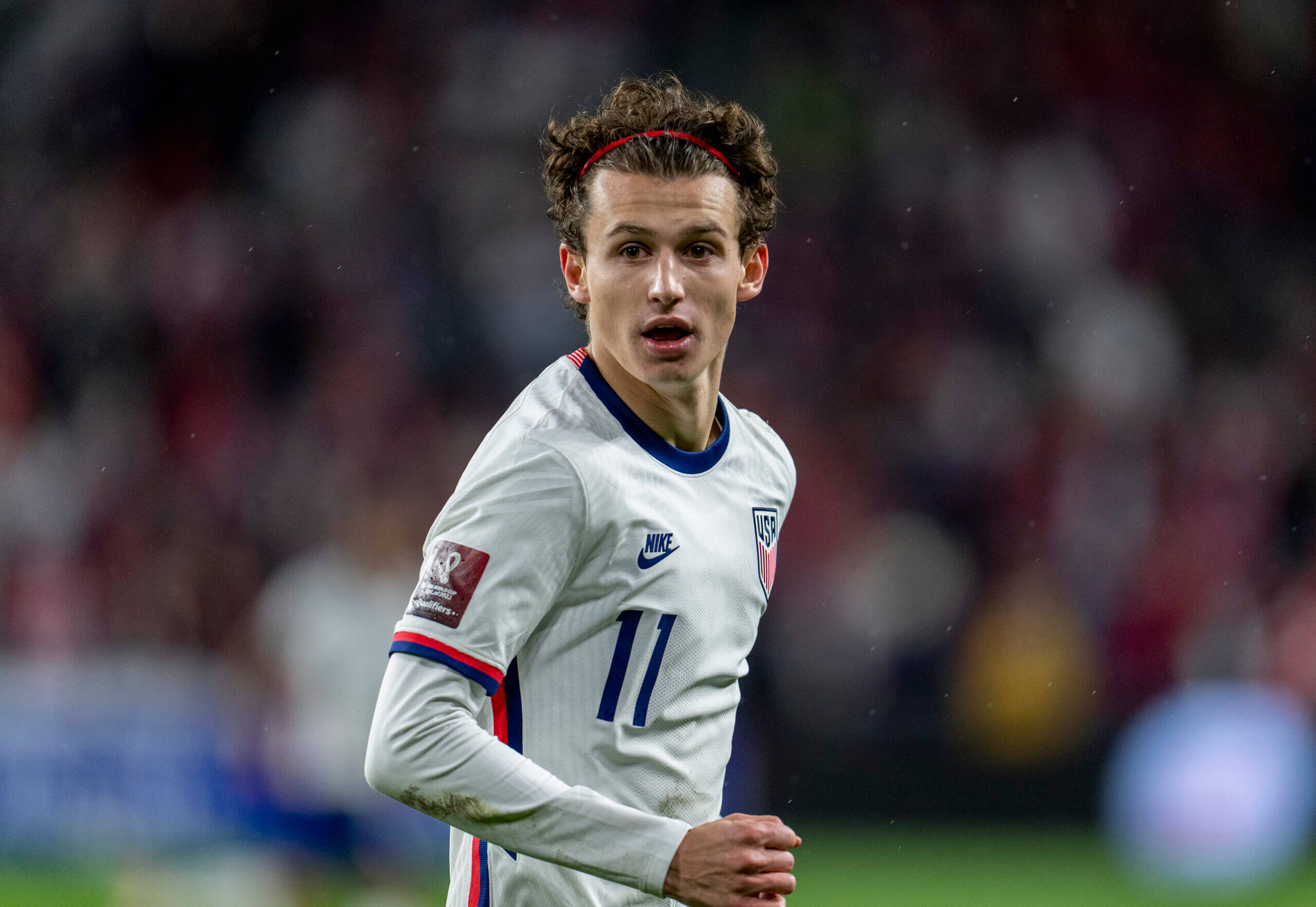 Brenden Aaronson has worked with Jesse Marsch before, and Leeds are likely to move for him again this summer (Photo: Brad Smith/ISI Photos/Getty Images)

The dip in creativity within a squad who were so adept at creating chances for so long under Bielsa has left little doubt that Aaronson is broadly the type of footballer they should be looking at in the next window: within budget, and in possession of the right skill set. Leeds must wish they had found a way to address that midfield nine months ago.

The goals they are conceding, however, might force them to re-evaluate just seriously the defensive structure of their team out wide.

Leeds have a problem at full-back on both sides of the pitch and have seen teams exploit those areas to good effect recently. Both of Wolves’ goals on Friday were created by runs beyond Dallas on the left, and Aston Villa’s opener in their 3-0 win at Elland Road two weeks ago was made in the same way, albeit on the other side: one runner dragging Dallas forward and another, Lucas Digne, sprinting into the space left behind, free to pick out attacking options arriving in the box. Much as Bielsa always took risks with his full-backs, it has developed into a significant area of ​​weakness.

Junior Firpo’s first season with Leeds has been a partial story of injuries but positionally and technically, he is yet to show that he is suited to the Premier League. Luke Ayling was one of Bielsa’s biggest success stories and he has telling performances up his sleeve, like that culminating in the stoppage-time winner at Wolves, but the 30-year-old’s form has been more intermittent than in previous years, a struggle others at Elland Road can relate to.

Leeds suffer noticeably without a peak Ayling at right-back, and they also suffer when he is asked to play elsewhere.

There are too many games where this team are prone to imbalance and too few ways of solving it. One of the big questions for Marsch come the end of this season will be how heavily he can continue to lean on the core of players who struck gold under Bielsa. Those stalwarts might themselves appreciate the introduction of fresh blood and support.

The next stage for Leeds is not so much about gutting their squad as it is adding to it.

There are plenty of existing players of whom Marsch can make something, but not enough to ride out another Premier League season and not enough to let sentiment interfere with the club’s development.

Leeds, however this season ends, are at the end of one cycle.

Between injuries, shortcomings and the call for investment, it should not be too difficult to deduce what the new cycle needs.

Leeds United’s season is over, to the relief of everybody, and it remains to be seen how the city remembers it. Will the sacking of Marcelo Bielsa be the lasting