On Merseyside they might argue with Jesse Marsch’s description of Manchester City as the best team in the world, but any dispute over their status is only splitting hairs. One game from a second successful Champions League final and five from a fourth Premier League title in five years; City are a team with very few peers.

The next stop for them domestically is Elland Road tomorrow (Saturday), the latest leg of the tightest title race since… the last time City and Liverpool were so neck-and-neck. Even ignoring what befell Leeds at the Etihad before Christmas, a reminder of what City do was served by them sticking four goals past Real Madrid on Tuesday, admittedly while taking damage in return. No club are ever immune from the City onslaught.

Marsch has been there himself, the manager in the away dugout when RB Leipzig lost 6-3 at City in a Champions League group game in September. He referenced that game after Leeds’ 0-0 draw away to Crystal Palace on Monday, explaining how he would not be meeting Pep Guardiola blind this weekend, but Leipzig’s thumping in Manchester taught him what other coaches learn week after week: that City are not big on charity and that very often, the gulf is too wide. “Today was our worst for defending,” Marsch said after Leipzig were split apart at the Etihad.

A firmer defense has been at the front of Marsch’s mind in his two months as head coach at Leeds, one of the priorities in the initial stage of his tenure. He was aware of the club’s interest in him before he was appointed in February but prior to their sudden loss of faith in Marcelo Bielsa, there was no expectation on Marsch’s part of him replacing the Argentinian before the end of this season at the earliest.

For him, this period in charge was a matter of survival, about becoming more difficult to beat. Part two of his strategy will be the full implementation of his style, on the other side of the next pre-season and summer transfer window.

Marsch’s Leads have tightened up at the back, with clean sheets in their last two matches, and discipline will be the starting point of their attempt to glean a result against City. It is extraordinarily rare to see a side contain Guardiola’s, as Leeds did under Bielsa at the Etihad this time last year — so more with the numerical disadvantage Leeds were forced to cope with for the whole second half — but there is rarely much value in engaging in a game of basketball with them. Leipzig produced 10 shots on goal to City’s 16 in that September meeting and were, unsurprisingly, on the wrong side of the result.

“I know from this season already — one of my teams has played Manchester City,” Marsch said on Monday. “I know how difficult it is to limit their best players from making good plays. We’ll have to be incredibly effective and clear on how we want to play against the ball and then find ways to control the game with the ball a little more.”

What, then, did March do last time? And will that Leipzig defeat give him pointers about what to guard against when City come to town this weekend?

The backdrop for Leipzig’s visit to Manchester was, in managerial terms, treacherous.

They had been routed 4-1 at home by Bayern Munich four days earlier and though Marsch was a mere five games into what turned out to be 21 in charge, a member of the club’s hierarchy was already being quoted about his future, insisting there was no need for the American to “worry about his job”.

Marsch himself publicly questioned whether fixtures as difficult as Bayern and City back-to-back had come too early for the squad he’d inherited from Julian Nagelsmann, which had been weakened by the loss of key players in the summer transfer window.

He went 4-2-3-1 at the Etihad, not the system he has been using at Leeds and the unlike system he will probably adopt tomorrow.

What jumps out about the average positions of Leipzig’s starting XI, also similar to the set-up we’ve seen in Marsch’s short time at Elland Road, is the narrow nature of his attacking players, with a midfield three tucked around center-forward Andre Silva (No 33). Some width came from the full-backs but City, in a 4-3-3, were better placed to use the wide areas of the pitch, a key part of the nine-goal battle that ensued.

City always attack in numbers and try to use every blade of grass. That night, Guardiola was more than happy to commit a forward line of five against Marsch’s back four.

Very early on, it was apparent that by spreading players across the pitch, using diagonals or crossfield deliveries to switch play quickly and winning one-on-one duels, City would succeed in stretching Leipzig. Marsch’s team were 2-0 down after 28 minutes and trailed 3-1 at half-time, unable to hold their shape.

In the system Guardiola used, Jack Grealish was asked to fill the left flank, with a certain license to cut inside and roam. Bernardo Silva worked the channels to create space and help City’s forwards rotate but it was Grealish more than anyone who Leipzig struggled to pick up, sucked too often to the other side of the field as their hosts tried to spring a trap. Grealish is likely to start against Leeds tomorrow, having sat out of City’s Champions League semi-final first leg win over Real Madrid on Tuesday, and with the return to come on Wednesday. Assuming he does, Guardiola will look to him to find gaps in Leeds’ armour.

This scenario, from the opening stages of Leipzig’s visit to the Etihad, is what Marsch has to avoid.

They were turned on halfway by a pass through their attacking line to Rodri and by spreading play to the right, City distracted attention from Grealish on the left. The left was left unmarked at the back post and Leipzi were forced to scramble a cross behind, conceding the corner from which Nathan Ake opened the scoring. 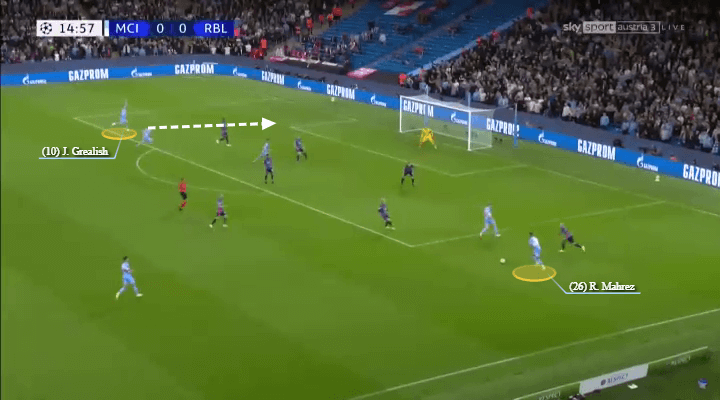 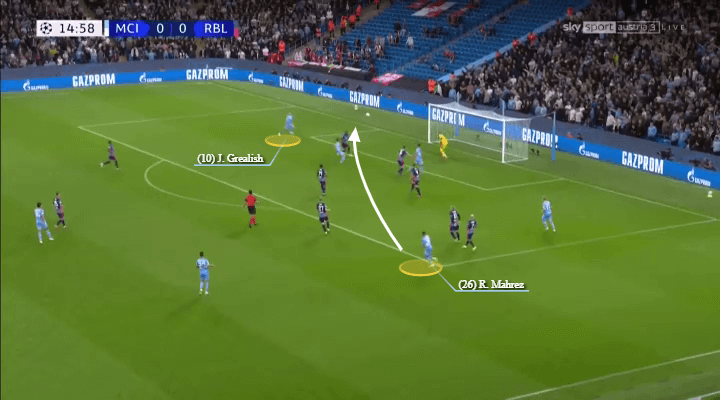 That was the 16th minute and in the 28th, Leipzig conceded for a second time, losing Grealish again.

Kevin De Bruyne knocked Leipzig out of shape with quick feet and good skill one-versus-one but the problem was the same for Marsch: all eyes turned to the right wing while Grealish was free on the opposite side of the box. Nordi Mukiele tried to intervene with Grealish unopposed behind him but could only head into his own net. 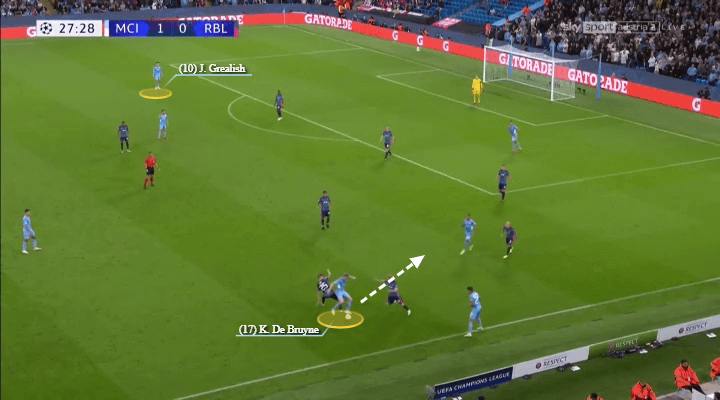 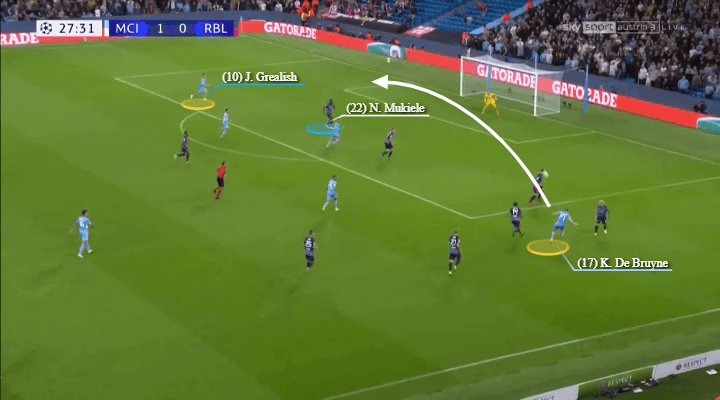 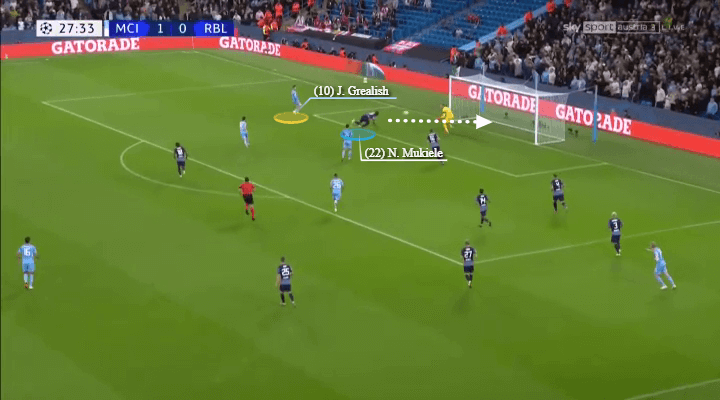 If Marsch thought the penny might have dropped, he was mistaken.

Right on half-time, Leipzig conceded a penalty after Juan Cancelo’s cross was headed against the arm of Lukas Klostermann. Just as the ball was about to come in, below, the overload on the left was glaring and asking for trouble.

City will try hard to do the same at Elland Road, working play back and forward and occupying lanes across the pitch in the hope that Leeds switch off and pay the price by themselves open. 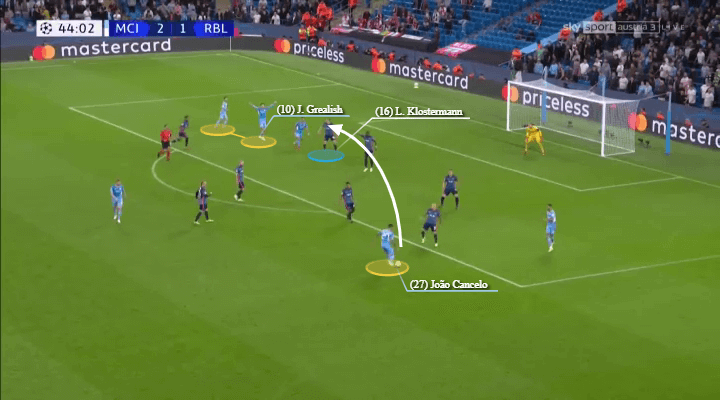 “We made such big mistakes, really bad,” Marsch said at his pre-City press conference yesterday. “They overload wide areas and they’re so good at crossing situations. Even though they don’t have much height up the field, they score so many goals from wide areas. We have to understand what that means.”

City comfortably exceeded their expected goals ratio against Leipzig on the night but interestingly, so did Leipzig.

Marsch’s side were able to score three times, surpassing an xG of just 0.55, and a hat-trick from Christopher Nkunku briefly put the result in doubt in the second half. Leipzig pulled the score back to 4-3 with 17 minutes of the 90 left before goals from Cancelo and Gabriel Jesus either side of a red card for Leipzig’s ex-City full-back Angelino gave the home side the win they deserved.

Nkunku’s finishes — two headers after losing his man in the box and a good strike across goalkeeper Ederson from close range — were examples of what Leeds might have to do to find a way through City.

Leipzig were faced with congestion on the edge of City’s box and were not given excessive amounts of space to work with. Their better attacks required patience and — more than anything — precise, close passing to cut City open. Nkunku’s third goal relied on all of that, constructed from halfway and laid on for him by a slick ball into the penalty area.

If Leeds intend to hassle City, they will have to better their attacking display at Palace on Monday, where they recorded the lowest xG of any game under Marsch so far (0.59) — and their sixth lowest of the season. 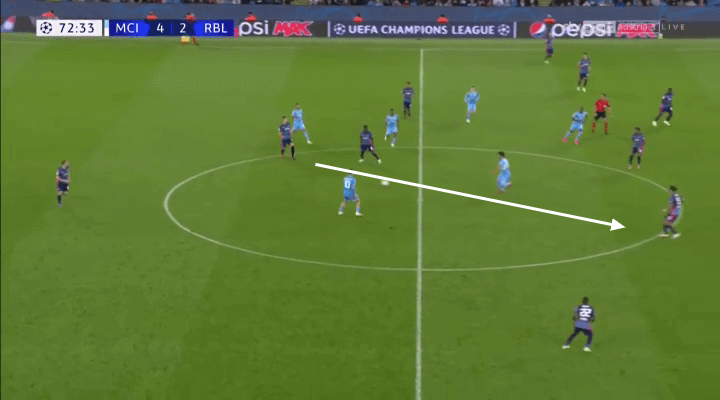 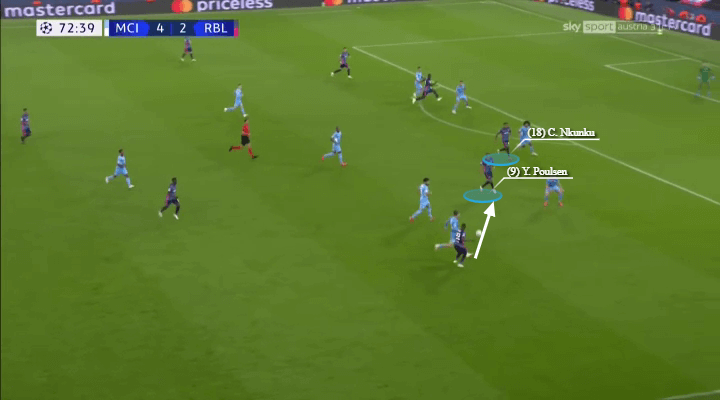 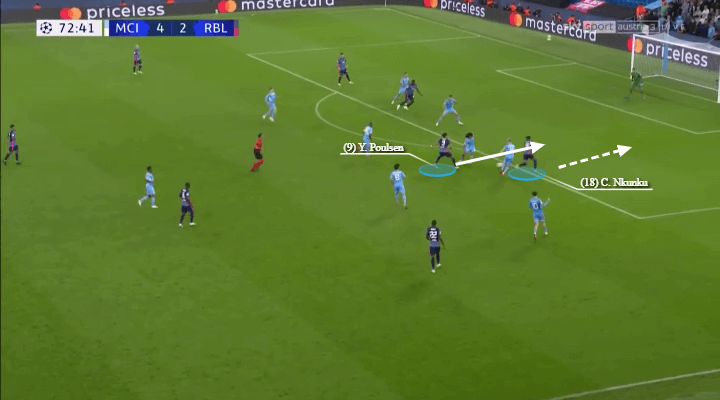 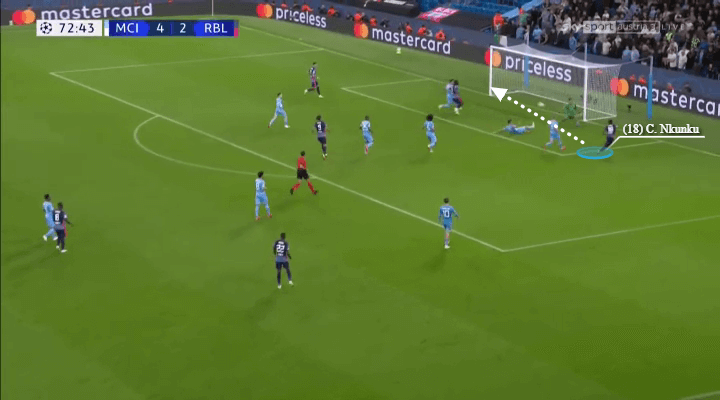 Expected goals, it should be said, are not a marker of everything — Leeds achieved their improbable win at the Etihad last season with an xG of 0.13, giving up 29 shots on their goal.

The crux of that remarkable victory was Bielsa’s defensive tactics working so emphatically well with 10 men. Marsch’s previous glimpse of City will tell him the same: that if Leeds’ shape out of possession lets them down as it let Leipzig down, they can forget it. With Guardiola, it is a high-risk strategy to fight fire with fire.

After their defeat at the Etihad, Leipzig gained a little revenge: a 2-1 win over City in the return game in December.

For Marsch, the taste of that revenge was not particularly sweet. Leipzig sacked him two days earlier.

First it was Burnley beating Everton in midweek. Then it was Anthony Gordon’s shot deflecting in off Harry Maguire at lunchtime yesterday, the start of a pitiful attempt by Manchester