Marcelo Bielsa, for all his conviction, was never a man of hubris. He locked into his ideas and he believed in them to his last breath at Leeds United — but his conviction never strayed into over-confidence. On the contrary, the long hours of training and the rabbit holes of analysis were the mark of a coach forever wary of thinking he had it cracked.

Paul Warne, the manager at third-tier Yorkshire neighbors Rotherham United, used to look at Bielsa on his stool by the dugout and equate his serene poise with total faith in the outcome of a game but the Argentinian used intense work to suppress his own doubts . His impact could feel as effortless as a click of the fingers until you got up close and watched him cracking the whip, allowing people to cut corners over his dead body.

There was no holiday for him last summer, and when the post-mortem is written for this season, post-survival or relegation depending on how the next few weeks from hell work out, the most half-witted conclusion would be to say that Bielsa Leeds would walk 2021-22. He did not even assume that he would walk it, which is why he enlisted staff at the club to put him through a personal fitness program and improve his physique for another year of all-in, austere living, as hard as any other.

But here Leeds are with Bielsa gone, their backs against the wall and no better odds of side-stepping the Championship than the toss of a coin. Heads you stay up, tails you face the music and either way, nobody is going to thank the club for the past nine months.

Those of us who thought Leeds would have enough this season are relying on four games to edge that argument by a whisker. Those who thought Leeds were bringing knives to a gunfight have, quite honestly, been proven right already. Second-season syndrome does not look the same from club to club, but Leeds have suffered their version of it — blown out of the water they were calmly floating in a year ago.

It would be convenient to hang the regression around the neck of one person or blame one factor but the failings have been broad. There are so many ways in which Leeds have gone wrong: tactically; in the caliber of their recruitment; in keeping their players fit; in carrying an adequate size of squad and in projecting the image of a club where life is under control. Draw it all together and the bones of a crisis stick out, an accumulation of pressure which can easily bury you.

Perhaps people other than Bielsa felt a touch of hubris after the ease of last season, their first back among the elite at last, or began to think that the march was unstoppable. Perhaps Leeds’ faith in the process strayed too close to complacency, though at board level they would regularly talk about the fact that, statistically, relegation in a club’s second year after promotion was as much of a threat as it was in their first. Nobody in the corridors at Elland Road thought this was coming, their fate staked on the final four games.

Faith is probably the best place to start. When Leeds began signing players in their first transfer window after promotion, they were purposely embarking on a two-year project, building a squad that, in their estimation, would see them safely through last season and this one. It was a vote of confidence not only in those new arrivals but in the existing group of players, those who had launched Bielsa’s project and found a way to master the Championship.

Leeds were backing not only their judgment in the market but the durability of the promotion squad and the capacity of existing faces to improve further as the standard got better. Bielsa was happy to stand by them and built his plan around them. Year one back in the Premier League was unimaginably comfortable but year two has pushed the envelope too far, exposing limits and making Leeds look like a squad stuck in a sluggish transition.

Investment is where criticism often focuses but the root of the club’s deceleration is not investment per se. Leads have spent on transfers since promotion — more than enough, Bielsa would always say — and they have not used outgoing deals to prop up their expenditure. The problem has been the impact of that investment, particularly for a club who like to tell themselves that they have a good handle on the transfer market. The money paid out since promotion has not resulted in permanent elevation.

Robin Koch, at £13 million, still feels like an unknown quantity at centre-back, infrequently seen in his best position. Diego Llorente is a known quantity in the sense that you can expect him to be unpredictable. No argument at all with the deal for Raphinha but Rodrigo, even now, is trying to find himself and neither Junior Firpo nor Dan James has made a material difference in transforming the team. It says something that for all the expenditure, last season’s player of the year was Stuart Dallas. And that when this season finishes, Dallas’ claim to the same award for 2021-22 will be stronger than most. 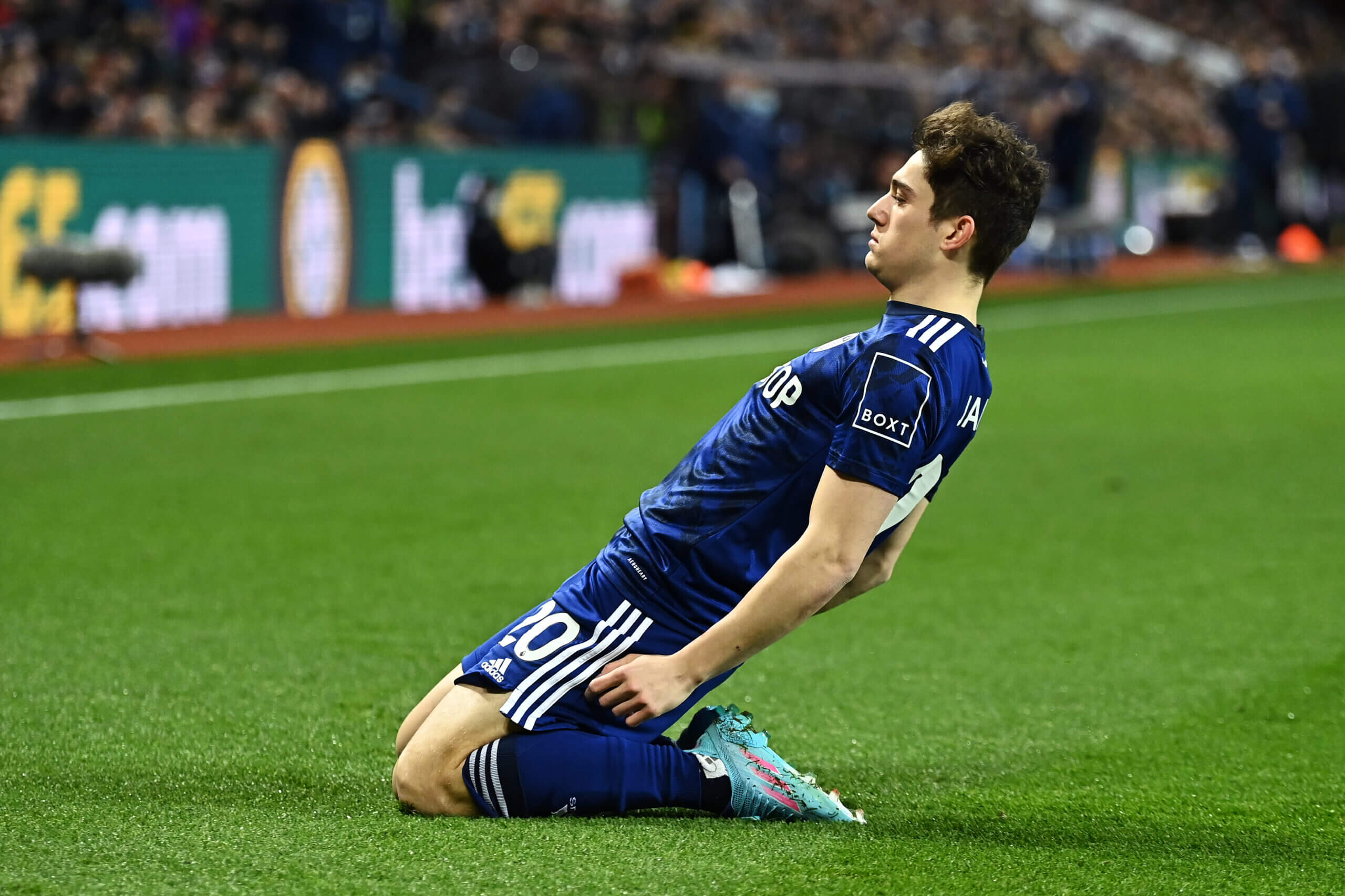 Dan James has not yet made the impact many hoped with Leeds (Photo: Clive Mason/Getty Images)

From the end of last season, first-team recruitment began to feel strangled. There was no new central operator in the summer window — no options to turn to or satisfactory for Bielsa once Chelsea’s Conor Gallagher chose Crystal Palace as his next loan destination and Lewis O’Brien of Huddersfield Town was considered too expensive — and nothing at all in January after Red Bull Salzburg knocked back two offers for Brenden Aaronson.

There was frustration at Bielsa’s refusal to take internal alternatives, such as Donny van de Beek of Manchester United or Harry Winks from Tottenham, but January was a gamble, an inactive month that took the chance that Leeds would have enough to get by, despite an injury list which meant, week to week, they barely had enough bodies to fill their bench. Injuries and a small squad, burning oil and water, the loss of continuity and match-winners and no sign of it improving quickly. That window more than any other is where inaction was most dangerous.

Who is to blame for that? It is not in dispute that Bielsa approved the signings made by Leeds and set tight parameters for the type of players he wanted. He was never forced to take signings he did not want or did not rate. The club were hands-off in that respect, in the same way that they refused to dictate or interfere with Bielsa’s training routine. Autonomy was what underpinned Bielsa’s peak years and the relationship would not have worked if Leeds had not been prepared to let him manage as he saw fit.

So much about this season has been wrong, though, and it is not a great defense for the board to say that when results began to cause concern and the dressing room looked bare, they left the tail to wag the dog. Leeds were telling themselves they would be OK in January and saying so publicly, only to sack Bielsa a month later. For too long, there was inertia on all sides, a reluctance to bite the bullet, do what had to be done and consider positive change, on the field or off it. Hindsight reveals so many junctures where the club and Bielsa could have helped themselves.

Change manifested itself in Bielsa’s dismissal, making way for Jesse Marsch’s appointment. The short-term wisdom of that decision was always results-dependent. Survival will allow Leeds to feel vindicated, convinced as they were that the squad had hit the wall physically and form would not turn for the better without a new coach. Relegation will fuel the opinion that they might as well have allowed Bielsa to see the remaining games through, even if it was true that Leeds had never been more tactically vulnerable under him than this season.

In the meantime, the under-23s have been collateral damage, still not clear of relegation from the Premier League 2 top flight after long parts of the year best performers seconded to a weakened first-team squad. The senior players at Leeds posted exceptionally high physical stats in pre-season, data that promised much, but everyone misjudged the robustness of the camp. It is also doubtful that anyone clocked the extreme effect the loss of key players to injuries would have on form. Owing to the departures of Pablo Hernandez, Gaetano Berardi and Gjanni Alioski, Leeds were down on numbers from the start.

The upshot is this four-game shootout, starting away to Arsenal on Sunday, in which Leeds either turn it on or go down. Either way, acknowledgment of the causes of the tightrope walk will be needed from the top. Whatever part he played in the decline, Bielsa paid with his job and Leeds will not get far by making the narrative about him — not least because his first three seasons gave the platform they craved when Andrea Radrizzani, Victor Orta and Angus Kinnear first reached out to him in Argentina.

To do so would ignore where the ultimate responsibility at a football club lies and ignore the reality of where the buck stops.

The lessons are plentiful and, sadly, fairly glaring.

All that remains is the anxious hope that Leeds, as a Premier League entity, will live to fight another day.