Two weeks to go until the season ends and raw fear abounds about where Leeds United will be when it does.

A club who had spent all of 15 days in the Premier League’s bottom three before yesterday are in there now, weighed down and lumbered by every conceivable brick.

Too good to go down, they have tried to tell themselves, but who can say that now? October 30 was the last time they sat in the relegation places but too many months spent teetering on the edge of the drop zone caught up with Leeds away to Arsenal on Sunday.

A sorry error, then a reckless red card, meant they were signing for their own execution by half-time. In reality, they were as good as done by the 10th minute when Eddie Nketiah scored his, and Arsenal’s second goal, tightening an already tight corner.

Those minutes were like a conveyor belt of flashbacks through the missteps and misjudgements that brought Leeds to this: three games from the end and in stark view of the fact that they could win every one of those matches and still go down.

A team which, in hindsight, was not built to last this season is out of wiggle room, praying for the swing they wanted to avoid when Burnley trailed a distance behind them. Coach Jesse Marsch looked like he was ageing mid-game. The board who asked Marsch to pick up the reins from Marcelo Bielsa at the end of February can only sit and watch a fortnight of sudden unfold death, strained faces in the stands at the Emirates as the tide came in.

“I do believe,” Marsch said, when asked afterwards if he thought his team would stay up, but they were overtaken by Everton on an afternoon of contrasts. Leeds lost 2-1 in north London while Everton were winning 2-1 at Leicester City. Jordan Pickford was immense as goalkeeping counterpart Illan Meslier had one of those days.

Everton, a point ahead with a fixture in hand, might now feel like they have broken the back of the road to safety. Leeds are staring at a short, sharp shoot-out, hampered by their punitive minus-35 goal difference. One point more than Burnley in the next 13 days keeps Leeds up. One point less or even the same amount sends them back to the EFL.

Balls-on-the-table time, in other words, and a simple test of whose biggest.

In that spirit, Marsch tried not to dig anyone out.

The red card went to Luke Ayling, captain against his boyhood club on his 500th professional appearance, midway through the first half but an apology from the defender to the dressing room was enough for his head coach.

“It’s not the time to point fingers,” Marsch said. “If we start playing a blame game with our team, we’re screwed. The only potential we have to get out of this is by sticking together.” The absence of division and in-fighting is the closest thing Leeds have to a saving grace with so much else weighing on them.

Almost exactly as Everton were taking an early lead in Leicester, Leeds committed the sort of abominable error which points a club in one direction.

There was nothing treacherous in Ayling’s backpass to Meslier, a ball rolled gently towards the goalkeeper’s feet, but he took a touch he did not have time to take and Nketiah stuck out a leg to poke the ball into the net before Meslier could send it on , a poacher doing poacher’s things. There were pats on the shoulder for Meslier, moral support from team-mates around him, but the die was cast.

Six minutes later, Gabriel Martinelli cut through on the left and squared a low pass to Nketiah, who hovered unmarked behind Diego Llorente and slotted an easy chance in, a poacher doing poacher’s things again. Time was when Nketiah was scoring like this for Leeds, intermittently, helping nudge them out of the Championship while on loan. Yesterday, had he been in the visitors’ blue, he would have been lucky to touch the ball before Marsch’s side were 2-0 down.

Elsewhere, Leicester then equalised and the whole afternoon at the Emirates was like the passengers on a damaged ship looking out to sea, searching for any sign of a lifeboat.

As little as Leeds have been in the bottom three this season, the safety rope is shortening to the point where nothing is going to rescue them if they cannot climb up it themselves. Almost everything is against them, that goal difference more than anything else.

Relegation is what happens when mistakes like Meslier’s happen. Those moments feel instructive and the smell in the air was one of wretched rot.

That perception applied to Ayling’s foul, a two-footed slide through Martinelli as the Brazilian retrieved the ball near the corner flag in the 27th minute.

Chris Kavanagh initially showed only a yellow card but the tackle was asking for a red and VAR delivered one, an unarguable change of decision and the end of Ayling’s season with a three-match ban to come. Moments later, Joe Gelhardt was gone too, the striker picked by Marsch to breathe life into Leeds up front substituted and walking disconsolately off the pitch without touching the ball anywhere near Arsenal’s penalty area. He had been part of a team who posted an xG of zero in that first half.

If replacement Pascal Struijk was damage limitation, he entered a building that was already close to ruin. 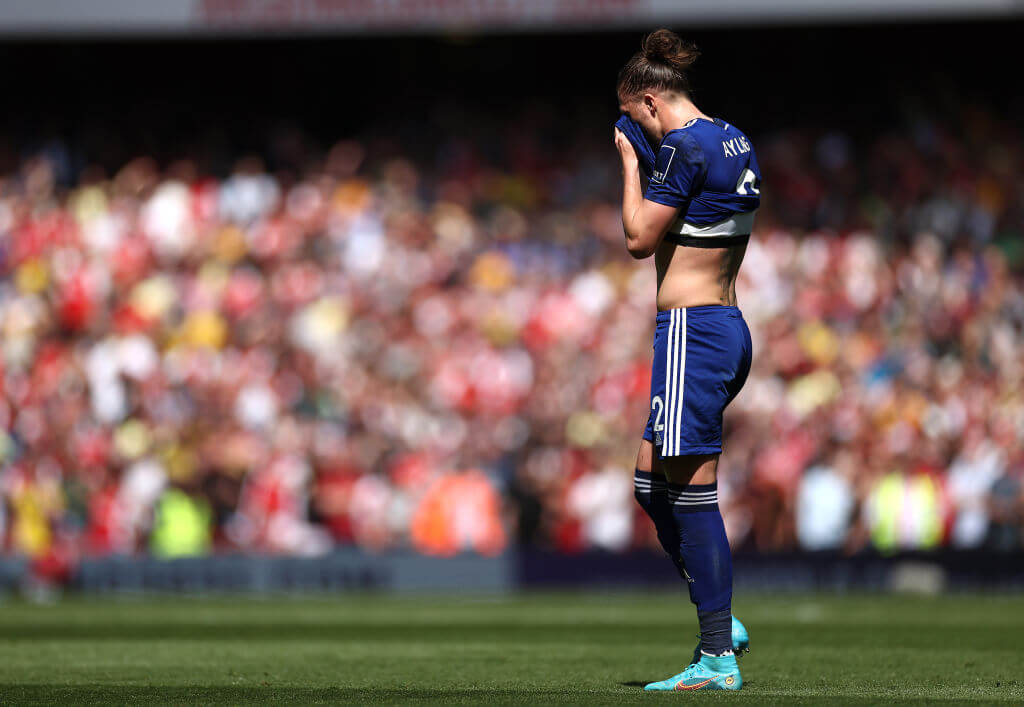 Worse still was the goal from Mason Holgate which gave Everton their win at the King Power, the second weekend running that Leeds have gone backwards while others went forward.

Meslier’s blunder was so early in the game that as Marsch’s players disappeared for half-time, there was no knowing what the initial plan of attack had been, all notion of a blueprint lost to the lamest of concessions.

As the interval wore on, news arrived of a win for Chelsea Under-23s, relegating Leeds’ development squad from the top division of Premier League 2. The blows were coming from all angles, stinging a club with very little punch resistance left.

Arsenal, though, have a tendency to swing between the accomplished and the inept and in the second half, they let Leeds back in.

Llorente scored from a corner, left alone at the back post as Junior Firpo flicked on a header, and the last 25 minutes were almost typical of a game that matters when fixtures are running out: Meslier coming up for a late corner, Rodrigo heading in the scraps of a 93rd-minute free kick, Arsenal asking where the hell their extra man was but allowed to exhale by the final whistle.

It’s true what they say: It’s the hope that kills.

That and the football.

They are wasting no time at Manchester City or Leeds United, two clubs who have decided to front-load their summer 2022 transfer windows. The expenditure is higher on one front,