Red Bull buying Leeds from Massimo Cellino – was the rumour ever real?

Three months on from a day of legal claims and counterclaims, the case of Jean-Kevin Augustin is still in the hands of the Court of Arbitration for Sport.

In keeping with the entire saga, there was no swift resolution to the dispute; no expedited verdict on whether Leeds United or RB Leipzig should shoulder the cost of a transfer which did not happen or how the tangle would straighten itself out.

As the argument over Augustin brewed and intensified, eventually landing on the desk of CAS in March, relations between Leeds and the Red Bull empire grew more and more strained.

Yet in spite of the bad feeling, channels of communication were stable enough to allow the Premier League club to complete the signings of Brenden Aaronson and Rasmus Kristensen from Red Bull Salzburg as soon as last season finished, proving that even organizations in dispute can find a way to do business.

Red Bull is seeking £18 million in compensation for Augustin, the fee Leeds were due to pay for him two years ago, but by selling Aaronson and Kristensen to the same club, their Salzburg branch have raised a separate £35 million — money that will support the Austrian club’s model of signing emerging talent and cashing in on those players a little further down the line to turn a healthy profit.

Leeds and Red Bull are presently intertwined: fighting on one front, negotiating on others and crossing paths with regularity.

Even Leeds’ head coach, Jesse Marsch, held three of his previous four managerial jobs in the Red Bull stable of clubs across three different countries, and is a man the energy drink company know inside out.

Leeds, as a fanbase and a cultural entity, see themselves as the antithesis of Red Bull’s style of football investment.

Red Bull is the corporate machine, a financial powerhouse that thinks nothing of renaming clubs, redesigning shirts and rebranding in whichever ways suit its strategy. The group is extraordinarily thick-skinned at riding out criticism and ignoring the accusation that its clubs are built for the plastic generation.


Marsch during his time in charge of New York Red Bulls, before working for Red Bull Salzburg and then RB Leipzig (Photo: Ira L Black/Corbis via Getty Images)

Leeds, in contrast, thrive on authenticity, on old-school ideas about what football should be.

They are the club where a highly unpopular attempt by then new owner Andrea Radrizzani to alter their badge in January 2018 died a death in the space of six hours, buried by an onslaught of public opposition.

There was a time, though, when the prospect of Red Bull buying Leeds United was more than a bad dream on the streets of Beeston.

Red Bull is yet to branch out into the English leagues. But for more than a year of Massimo Cellino’s spell as owner of Leeds, investment by the drinks conglomerate — which also owns a football club in Brazil, a Formula 1 team and has sponsored a string of events around the world ranging from extreme sports to volleyball — was the cause of conversation around the Yorkshire club, with some of the chatter fuelled by Cellino himself.

The prospect came to nothing and it has not reared its head since but several people who were involved at a senior level at Elland Road in 2014 and 2015 believe the interest was real; that, in that period, Leeds were genuinely on the Red Bull radar.

By late 2014, Red Bull was a long way into the process of building its global network of football teams. It had stepped into the market by acquiring SV Austria Salzburg in 2005 and rebranding them as Red Bull Salzburg. It was using a different Austrian club, FC Liefering, as a feeder side for Salzburg, almost the equivalent of a reserve team.

Four years later in Germany, SSV Markranstadt — a minor club based near Leipzig, playing far below the Bundesliga — became RasenBallsport Leipzig (RB Leipzig). Meanwhile, in MLS, the Metrostars had become the New York Red Bulls, a club Marsch would join as head coach in 2015.

This expansion of the football group was aggressive and there was major funding behind it. Resistance to the aesthetic changes Red Bull tried to implement did not dissuade the firm from pressing ahead.

Cellino, by the end of 2014, had owned Leeds for several months.

Very little was straightforward with the Italian. He secured control of Leeds on appeal, having initially been declared in breach of the EFL’s owners’ and directors’ test but the EFL bided its time and returned to hit him with an ownership ban in late 2014, a punishment relating to tax evasion cases in Italy.

Cellino was a survivor and a hard man to control but his suspension had the effect of making Leeds look like a club for sale; a business which, in the circumstances, he might have little choice but to sell.

In November that year, with the EFL mobilising to disqualify Cellino, a story ran in the Daily Mail about the possibility of a bid for the club arriving from Red Bull. The newsmed stem from an intermediary claiming to represent the firm asking for and securing a meeting with Cellino in the UK.

Cellino was indignant, calling the story “disrespectful” and dismissing it as unfounded. “We talked with an agent who was working for Red Bull but I’d never met him before and I don’t know what Red Bull wants to do,” Cellino said. “I’m not selling the club.”

Red Bull was not in the habit of responding freely to speculation — its financial clout meant rumours about further growth in its football project were not unusual — but in this instance, it took the time to respond publicly if briefly. “We can confirm that Red Bull has no plans to take over Leeds United nor take a stake in the club,” a statement read in full.

The claim had hit a wall in the space of 72 hours, slapped down by both sides.

But then, three months later, came a development that made Red Bull’s interest in Leeds look and sound significantly more tangible.

It involved Leeds Fans Utd (LFU), a new supporters’ group that had been set up with the aim of purchasing a minority stake in Leeds using money raised via pledges from the club’s fanbase. The idea was that by buying a shareholding, Leeds’ support would have a little input into the running and management of the club, and potentially a voice in the boardroom. Within three months of forming, LFU’s drive for funds had raised around £400,000.

Cellino’s EFL suspension and doubts about the sustainability of his ownership prompted LFU to seek engagement with potential buyers of the club, to discuss with them the possibility of future fan involvement. In February 2015, the group received an email from a well-regarded UK football agent, presenting them with a proposal. High-level officials from Red Bull were willing to speak with LFU’s representatives if LFU’s representatives were willing to travel to a meeting place in London’s Soho Square.

The email purported to be offering face-to-face discussions with three people: Ralf Rangnick, Red Bull’s then sporting director, Oliver Mintzlaff, its head of global soccer, and a legal representative by the name of Florian Muller.

There was no express detail about what Red Bull was planning or what exactly it wanted to discuss. LFU was never able to say unequivocally if the suggestion of a meeting was genuine or all that it seemed. Nonetheless, there seemed no reason to suggest a discussion like that if Red Bull was not at least considering the option of buying into Leeds. 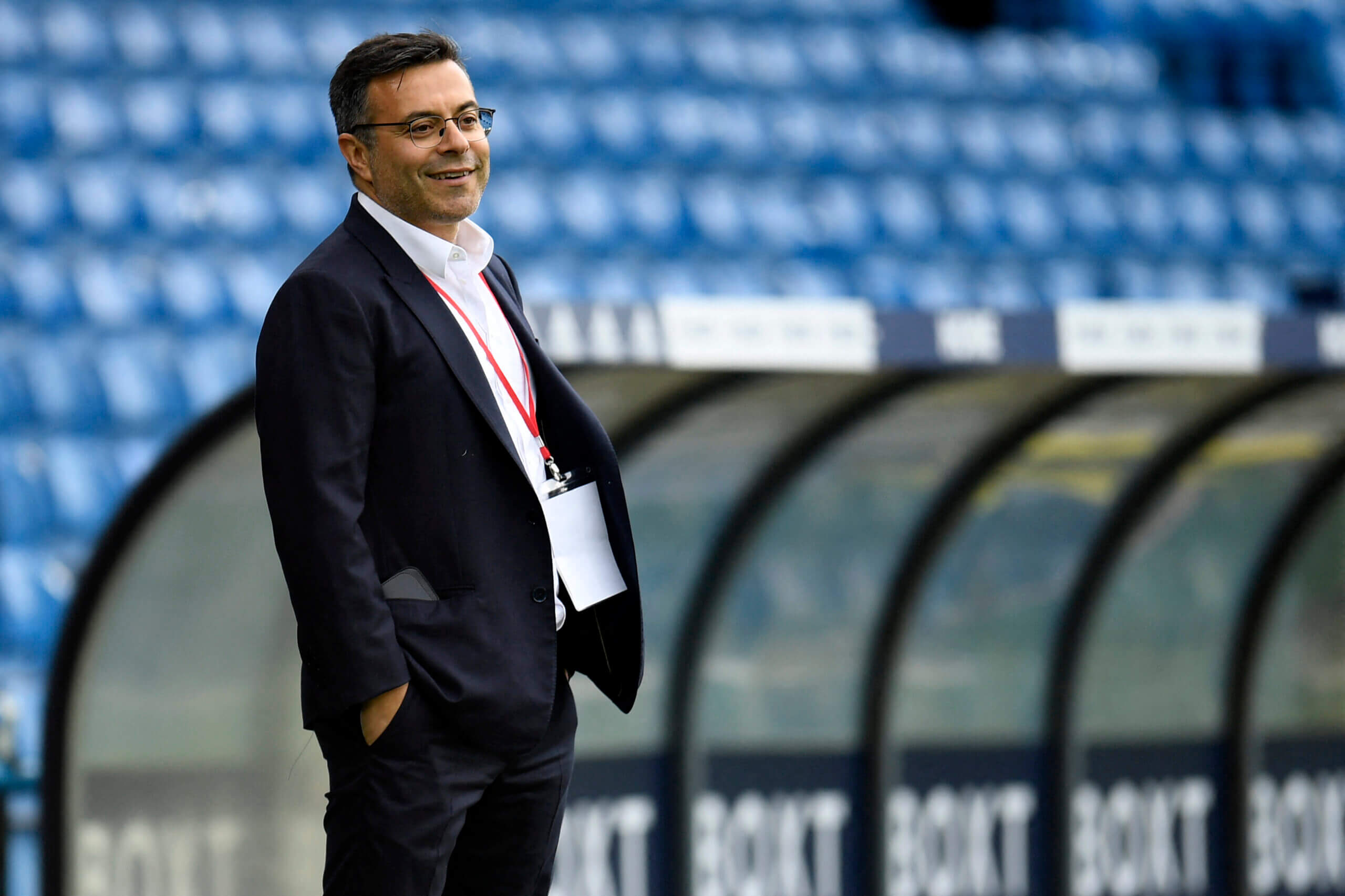 Radrizzani was the man who arrived to end Cellino’s reign (Photo: Oli Scarff/AFP via Getty Images)

But LFU turned the invitation down after asking for assurances that if Red Bull considered investing in Leeds, it would give supporters veto over issues like renaming the club, changing the color of their strip or renaming Elland Road. The intermediary could not make those promises and the communication ended there.

Cellino, at that moment, was absent from England, serving his penance. Leeds were officially in the hands of Eleonora Sport Ltd, the firm he had used to buy the club. Cellino, despite suggestions to the contrary, convinced the EFL that he was detached from the Elland Road boardroom completely, uninvolved in any decision-making while his ban was ongoing. But in April 2015, as that suspension drew to a close, the Red Bull investment story popped up again.

Cellino responded to an initial media enquiry by saying it was “not true, just another story” — only to rapidly change his tune by phoning the same outlet back five minutes later. “There is an offer,” he insisted. “I didn’t know about it but I spoke just now with Giampaolo Caboni, one of the directors of Eleonora Sport. He said Red Bull has made an offer for the club. The shareholders will have to think about it. I don’t know what they will do.” Again, Red Bull were quick to respond. “Another involvement in football is not planned,” Mintzlaff told the German media. It was as clear as the first denial six months earlier.

One former employee who worked with Cellino at Leeds has told The Athletic that, while he was never privy to any meetings, he was under the impression that Red Bull’s interest in the club was more than tittle-tattle.

When it came to the club’s ownership structure and the possibility of selling equity, Cellino was not in the habit of sharing information with staff around him but many of them had picked up on the Red Bull link. Another ex-staff member said that for all the talk about Red Bull, there was never a point where senior employees at the club believed a sale was actually on the cards. There were whispers aplenty, until they petered out.

For a while at the start of 2015-16 season, Red Bull continued to be spoken about at Elland Road. Rangnick was said to have attended at least one game in Leeds the previous year. The club’s then manager, Uwe Rosler, spoke about how he had been to RB Leipzig to study them before taking the job at Elland Road but there was, ultimately, no Red Bull arrival at Leeds, no clash of unlikely and uncomfortable bedfellows. Seven years on, the group continues to operate without an investment in English football.

The last time Cellino mentioned Red Bull was in 2016, in an interview with an Italian website. “I had an offer from Red Bull but I do not want to sell,” he said. Except two days earlier, Radrizzani had been a guest of Cellino’s during Leeds’ first game of the 2016-17 season, a 3-0 defeat away at Queens Park Rangers.

And two days later, news broke that Radrizzani was in discussions to acquire the club, launching a £45 million takeover that would go through as soon as the season finished, ending Cellino’s reign. In the case of Red Bull, it was like so much with Cellino: question everything, discount nothing and always be ready to second-guess.

Thomas Tuchel insists ‘now is the time to take calculated risks’ as Mateo Kovacic hopes to play through the pain barrier in the FA Cup final, while Chelsea will also