RB Leipzig: From the crisis team to Germany’s form challenging on three fronts

It has been a season of two halves for RB Leipzig. A few months ago, as winter darkened and advent began, the one-time title contenders were wallowing in mid-table, nursing the wounds of their worst start to a Bundesliga season.

Fast forward to the dawn of spring, and everything is different.

Leipzig are not only on course for a Champions League spot, they still have two chances of some silverware in the Europa League and the DFB-Pokal. And as they gear up for a make-or-break month, this in-form side are relishing the prospect of competing on three fronts.

This month, they play Atalanta of Italy in the Europa League quarter-finals and Union Berlin in the semi-finals of the Pokal — Germany’s version of the FA Cup.

“I wouldn’t bet against us achieving all three aims,” defender Lukas Klostermann tells The Athletic. “Obviously it won’t be a bad season if we don’t manage that, but I don’t think it’s unrealistic.”

The fact that it is realistic shows just how much has changed since Christmas.

In December, Leipzig were playing in front of empty stadiums and had a meager 18 points to their name. Tomorrow (Saturday), they will play in front of an expected 81,365 away to Borussia Dortmund — the first time Germany’s largest stadium has been full since the start of the pandemic two years ago — in the first of seven April fixtures that could yet forge the Most successful season in the club’s, admittedly brief, history.

So what has changed? Very simply, the answer lies in the dugout.

Under previous coach Jesse Marsch, Leipzig lost six of the season’s first 14 Bundesliga matches. Under replacement Domenico Tedesco, they have lost just one so far in 2022 — narrowly to leaders Bayern Munich.

In the space of a few months, Tedesco has turned a crisis team into one of the country’s most in-form sides.

He’s also been gracious about his predecessor. “I think Jesse did a really good job. I found a team here that is strong, both mentally and physically, and that is the base of my work,” Tedesco recently.

That may be more than good manners.

Marsch, now on course to save Leeds United from relegation after overseeing back-to-back wins in their last two matches, may have struggled in the Bundesliga, but it remains quite hard to pin down exactly what went wrong. Even he was at a loss to explain it, often telling reporters quite frankly that he simply didn’t know what the problem was.

He was, after all, supposed to be the perfect fit for Leipzig. The American had worked as an assistant coach there before his spell at their Austrian sister club Red Bull Salzburg, and there was much talk of him having the “RB DNA”.

But the dream pairing failed to work in practice. Marsch struggled to reach a squad that had lost a handful of key players over the summer, and Leipzig soon spiralled into inconsistency. “Our form was like a rollercoaster. We had games where we played really well and then games where nothing worked,” remembers Klostermann.

Yet Klostermann insists there was nothing fundamentally wrong in the dressing room. “It wasn’t like we felt that nothing was working at all and we were always really down on ourselves. We did feel even then that we weren’t that far away (from our best),” he says.

Tedesco’s success, he argues, has been in the softly, softly approach. Rather than throwing out Marsch’s ideas and starting again from scratch, he has eased the players slowly into a kind of football they feel more comfortable with.

“I think he found a very good way of presenting us with his ideas and how to implement them. He didn’t try to change everything straight away, and that made it easier for us. Because sometimes if it’s too much, it can unsettle a team,” says Klostermann.

“We have kept the things we were doing well (under Marsch) and changed where it wasn’t working, where we weren’t playing patiently enough. That has been the key,” he says, adding that Tedesco has found the “perfect dosage” to introduce his ideas.

So if the dosage is correct, what is the medicine?

The perceived wisdom is that Tedesco has brought back the kind of football Leipzig were playing under Julian Nagelsmann. In his two years in Leipzig, now-Bayern coach Nagelsmann moved away from the smash-and-grab football of his predecessors to a more possession-based model. Marsch and his “RB DNA” had sought to return to that old style, and Tedesco is now launching a counter-counter-revolution.

It’s a tempting theory, not least because Tedesco and Nagelsmann go back a long way. Only two years apart in age, they were both implausibly young when they launched their Bundesliga careers a few years ago. They also studied for their coaching badges together, sharing lifts to and from the lessons. Tedesco, famously, outscored Nagelsmann on the final test.

Yet both have sought to play down their similarities and Klostermann, who has played under both coaches in his eight years at Leipzig, says that while the team are to some extent returning to things they did differences under Nagelsmann, the still abound.

“Luckily, not every coach has the same philosophy — otherwise it would be pretty boring,” he laughs. “With Tedesco, the mixture is the key. It’s important that we can play with different systems and approaches, and that we’re more unpredictable now, more flexible.”

Flexibility is one of two words that comes up time and again with Tedesco. The other is control.

The son of Italian immigrants and a lifelong Italy fan, he has always appeared to be a coach who appreciates the beauty of a well-drilled back line. He lists Fabio Capello and Marcello Lippi among his idols, and his eyes light up when he talks about how Antonio Conte’s Italy played at Euro 2016. “They beat that great Spanish side 2-0 with a really well-organised team,” he says .

One of the first things he did at Leipzig, he says, was to throttle things down a little, and bring more control to their game. “We wanted to play a bit more possession, press a bit differently, sometimes to stay a bit calmer. I realised the players are hungry to press really high, and I like that too, but sometimes it’s better to stay calm.”

Yet far from draining the life out of a naturally aggressive team, Tedesco has made them even more potent, reinvigorating attacking players who had struggled during Marsch’s brief reign. Spanish left-sided player Angelino is returning to the form he enjoyed under Nagelsmann. Portuguese striker Andre Silva, a high-profile signing from Eintracht Frankfurt, has tripled his goal tally under Tedesco.

This is the flexibility that Klostermann was talking about, which was arguably lacking with Marsch.

“You have to adapt — adapt to the players you have in the squad,” says Tedesco. “If you look at the squad I had at Schalke, we had many physical players, we played on the counter-attack a lot and we finished second behind Bayern because we defended well and we were compact. Here in Leipzig, we have a completely different team.” 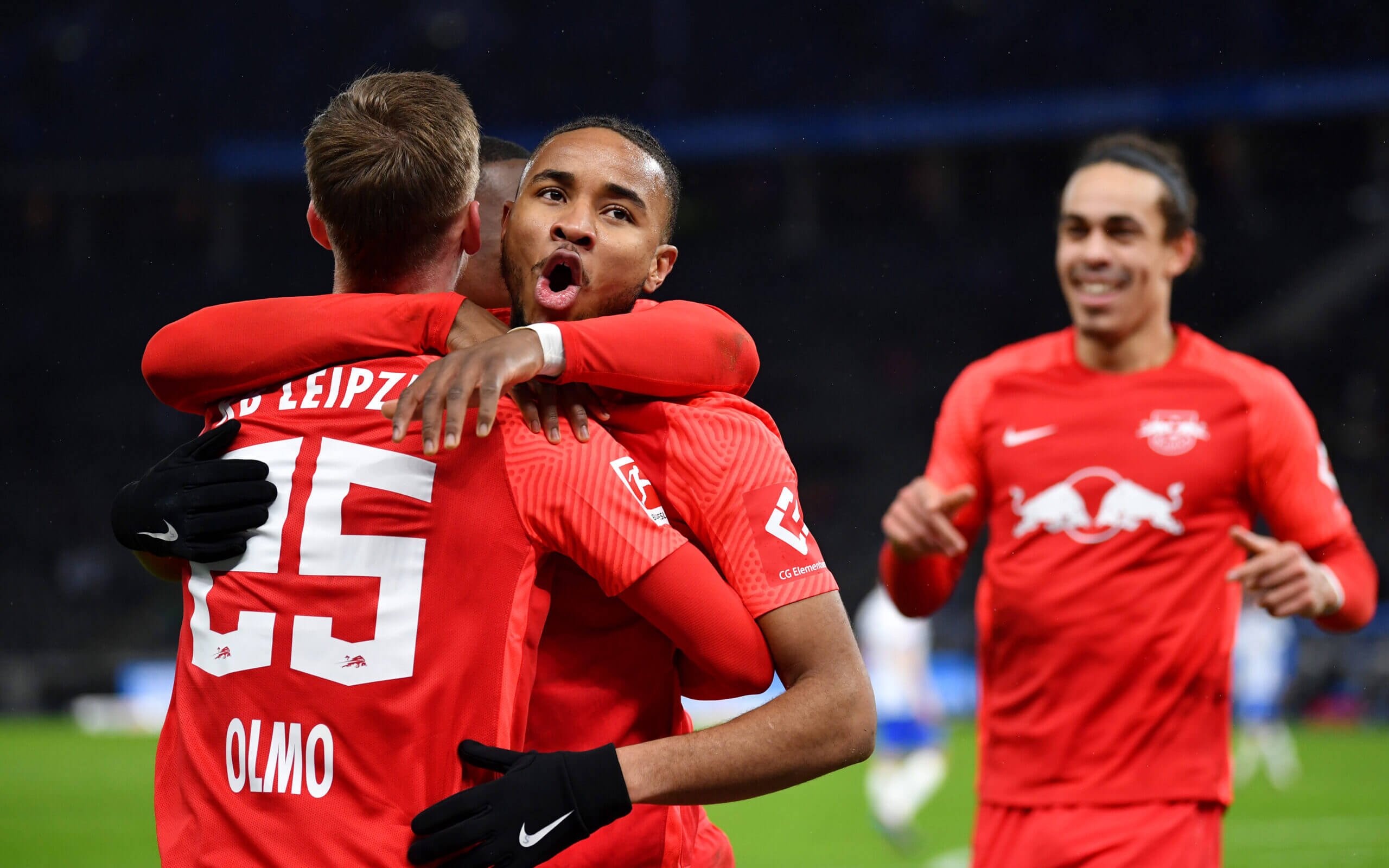 Forward Christopher Nkunku has been in outstanding form for Leipzig this season (Photo: Stuart Franklin/Getty Images)

The flexibility is not just tactical.

The 36-year-old has a salesman’s smile and you get the feeling he could probably charm anyone if he wanted to. Tedesco speaks six languages ​​and switches seamlessly between all of them on the touchline, depending on the addressee.

“I try to just speak English during the team sessions, and I want everyone to learn German, because we are a German club,” he says. “But it’s not that easy, so sometimes it’s easier to speak French with the French guys or Italian with Andre Silva, who used to be at AC Milan.”

Klostermann is also full of praise for Tedesco’s communication, saying the way the team have analysed their performances under the new coach has been objective and to the point. “I’ve had coaches in the past who have worked themselves into a rage, and I’ve always thought that doesn’t really help, it just unsettles the players. But I and my team-mates all agree that the analysis side of things has been extremely good in the last few weeks.”

There has certainly been a lightness to Leipzig in recent months.

A new optimism to the way they are rolling teams over, which was not there even in the best moments under Marsch.

They are having fun again.

As they look to secure their club’s first piece of major silverware in the coming weeks, Tedesco insists his side are not under any pressure:

“There will be no pressure, because we know where this team has come from this season. We were 11th in December, and now we have this month ahead with lots of finals to look forward to. It’s a bonus.”