Panenkas, shootouts and action bias: the best place to aim a penalty

When Karim Benzema stepped up to the spot with his side 4-2 down in a Champions League semi-final, the pressure was on.

Having missed two penalties against Osasuna the weekend beforemany would have forgiven Benzema for simply focusing on a good contact — electing for power rather than accuracy.

However, that wouldn’t do for a man enjoying the most prolific season of his career. So he sent an audacious Panenka high into the center of the goal.

When it goes right, goals like Benzema’s can be one for the archives. The technique was majestic and with Manchester City’s Ederson diving to his left, it was perfectly placed.

Unfortunately for some, it can also make the penalty taker look rather foolish when a Panenka is saved — a recent example being Sergio Aguero’s weak attempt last season, which was palmed down with ease by Chelsea’s Edouard Mendy (below). 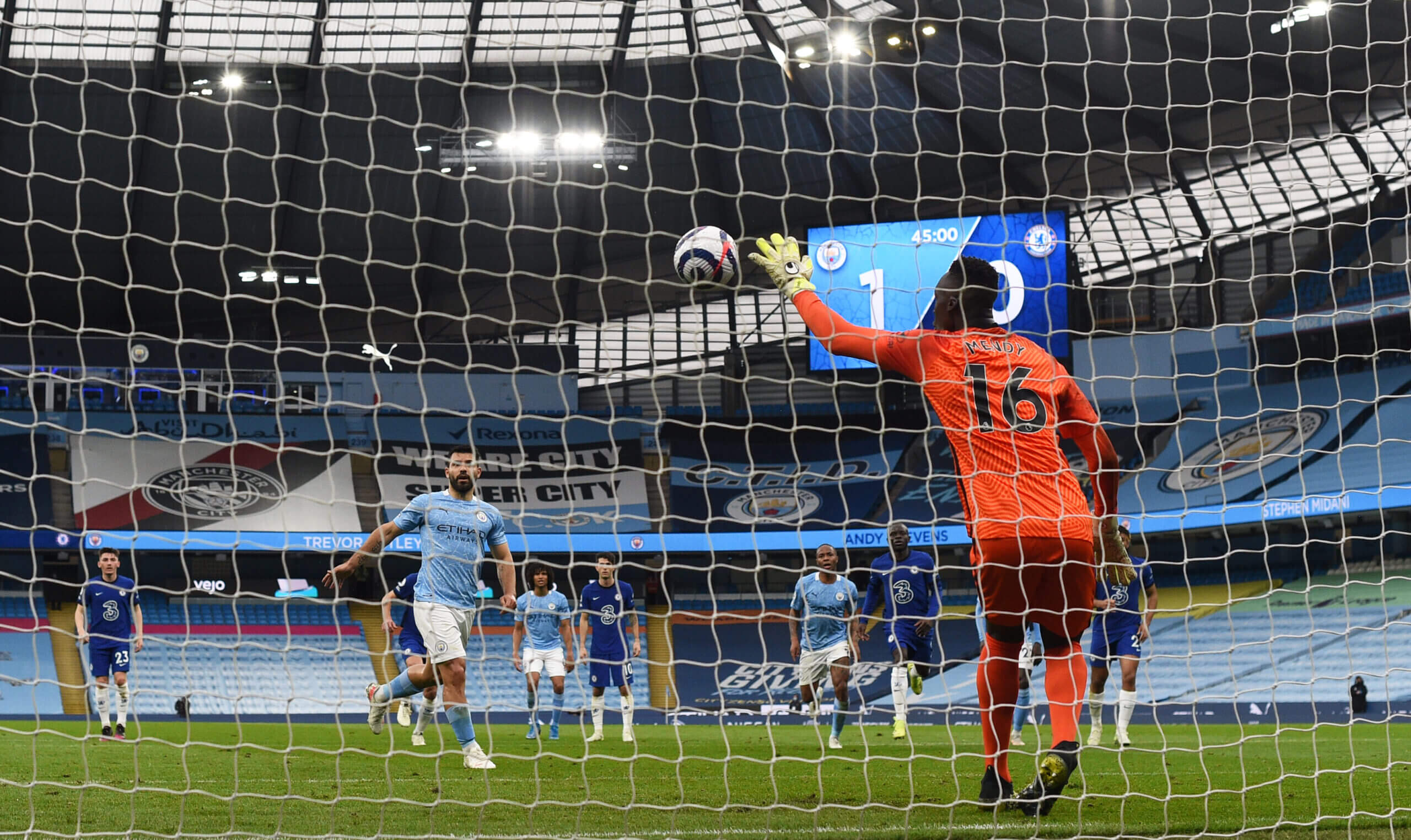 The outcomes were different, but were Benzema and Aguero onto something with their shot selection?

As the season enters its climax and the potential for title-defining, season-defining shootouts appear, we try to answer the question: where is the best place to shoot from the spot?

“There’s not one perfect way. Everyone has what they want to do. I had my way, and everyone else has different ways. I know it sounds simple but the ball has to end up in the back of the net and that’s a good penalty, isn’t it?”

Wise words from Alan Shearer, who is best placed to comment on the topic as the Premier League’s all-time top penalty scorer with 56.

Ultimately, nothing can replace practice and repetition behind the scenes.

“I would know on a Thursday where I was going to put my penalty if I got one on a Saturday,” Shearer continues. “I would get the reserve keepers to stay behind training on Thursday and Friday and I would tell them which side I was going to hit the penalty. I said they can’t cheat (dive early) but this is where I’m going to put it so you know which way to dive, and I wouldn’t leave until I was satisfied that I had at least five penalties where I wanted to hit them.”

So where are the most common locations chosen when shooting from the spot? Since 2017-18 in the Premier League, the highest proportion of on-target penalties have been, unsurprisingly, in the bottom corners, with a lower but still significant 16 per cent struck low down the middle.

Interestingly, under 20 per cent of penalties have been in the top half of the goal in the past five seasons — more on that shortly. 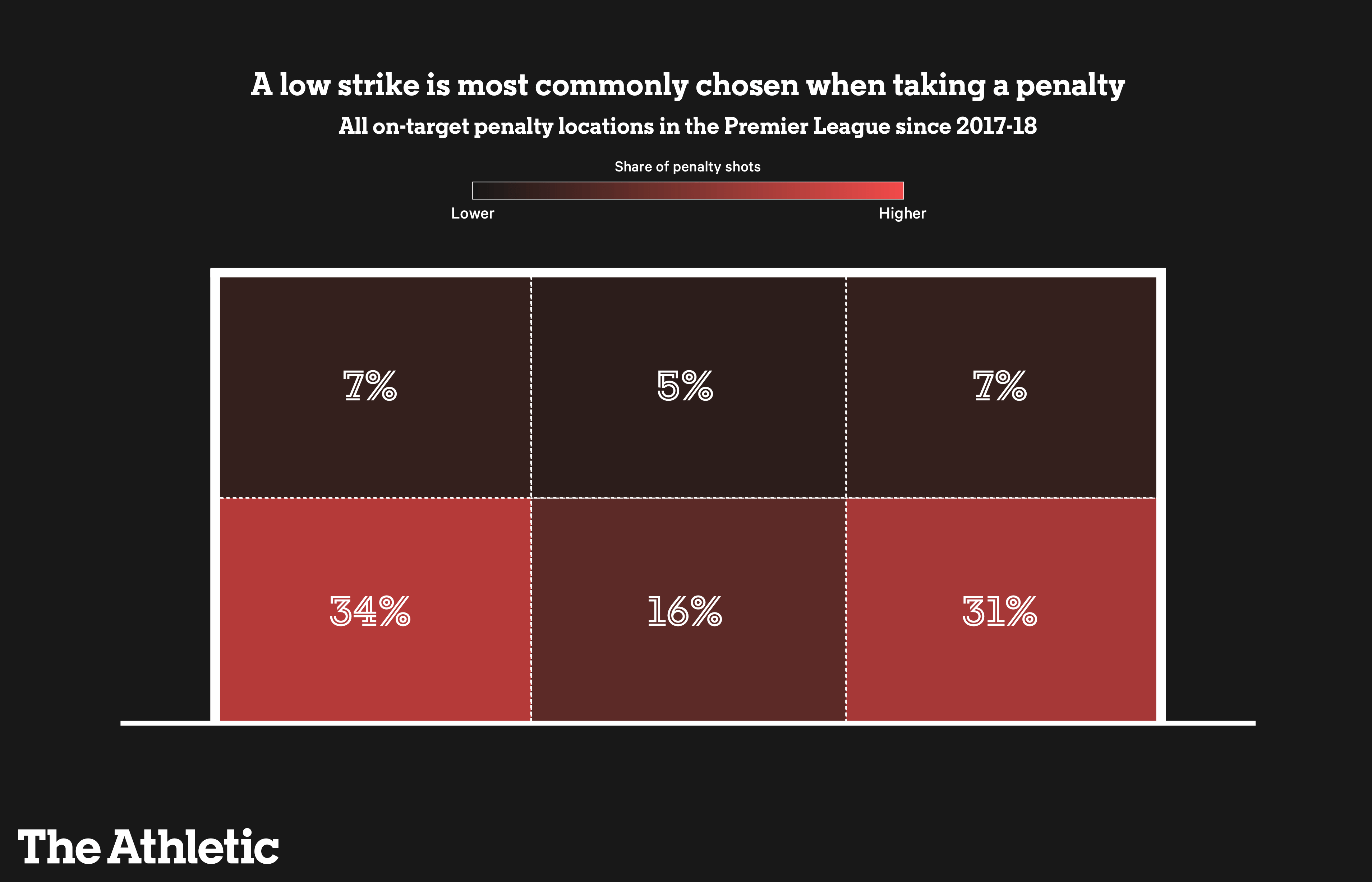 The subtle skew to the bottom left is also worth noting, most likely as a consequence of a right-foot dominance among penalty takers to strike the ball with greater force — as Shearer attests to.

If you strike it as well as Shearer did, high to the goalkeeper’s right — or left for that matter — you are reaching the “unsaveable” zone.

The numbers back this up, with 100 per cent of efforts in the upper corners being converted in the last five seasons. What is also interesting is how high the conversion rate is for strikes high in the center of the goal — an option less chosen but highly lucrative, and notably more successful than shots struck in the bottom corners. 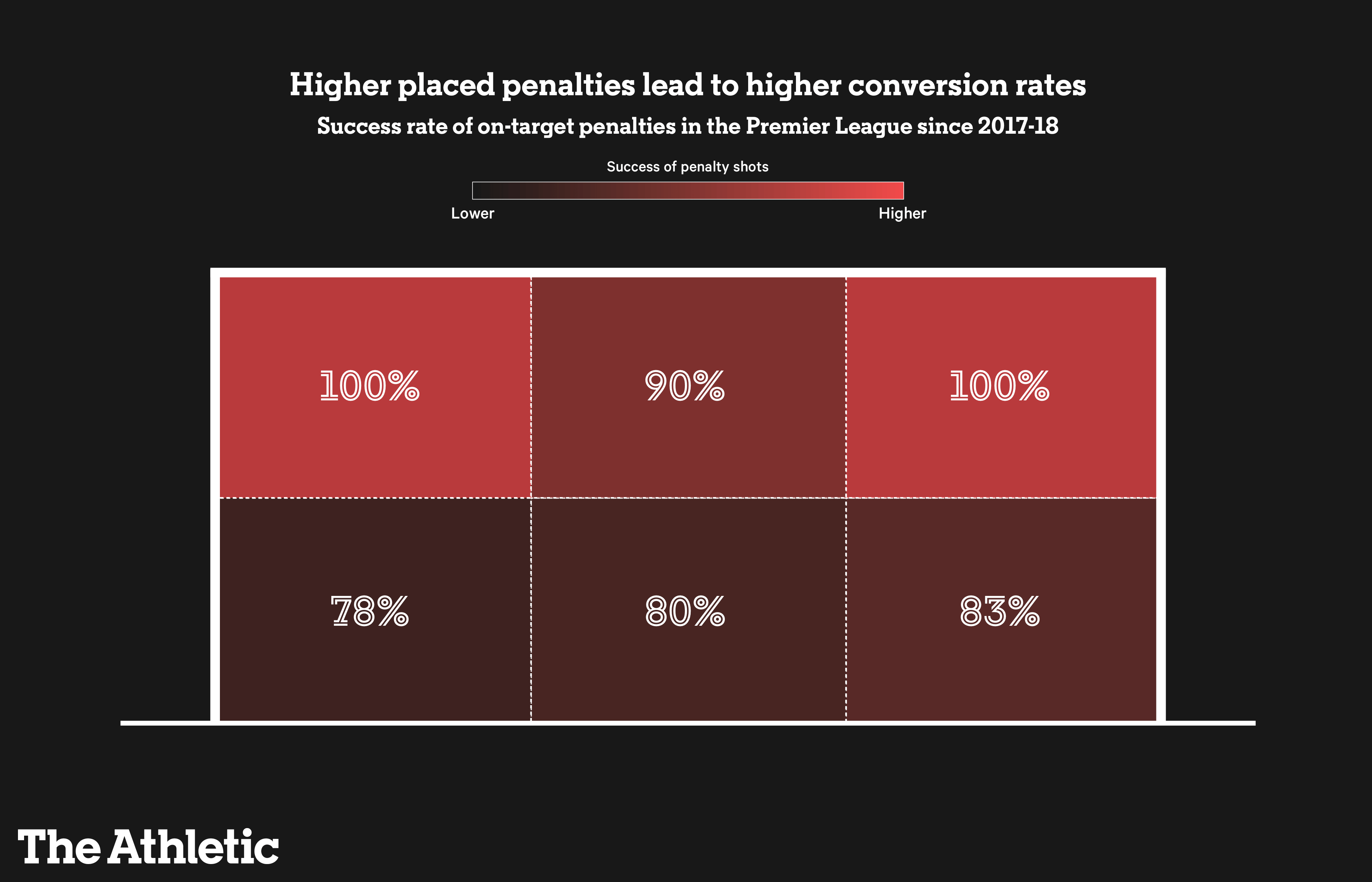 Of course, a higher number of shots in the lower zones is naturally going to lead to greater variation in the outcome. Likewise, shooting in the top corners comes with its own risk of missing the target, but should there be a case for more penalties to be struck down the centre?

Research has shown that goalkeepers are often compelled to dive to their left or right when facing a penalty — what could be called an “action bias”. Goalkeepers want to show that they are attempting to save the ball, meaning that inaction — ie remaining standing in the center of the goal — is rarely as an option.

In recent Premier League seasons, goalkeepers stay standing only three per cent of the time on average. A skew to dive to their right (a player’s left) is chosen 55 per cent of the time compared with 42 per cent to the left — matching the dominance for penalties to that side of the goal. 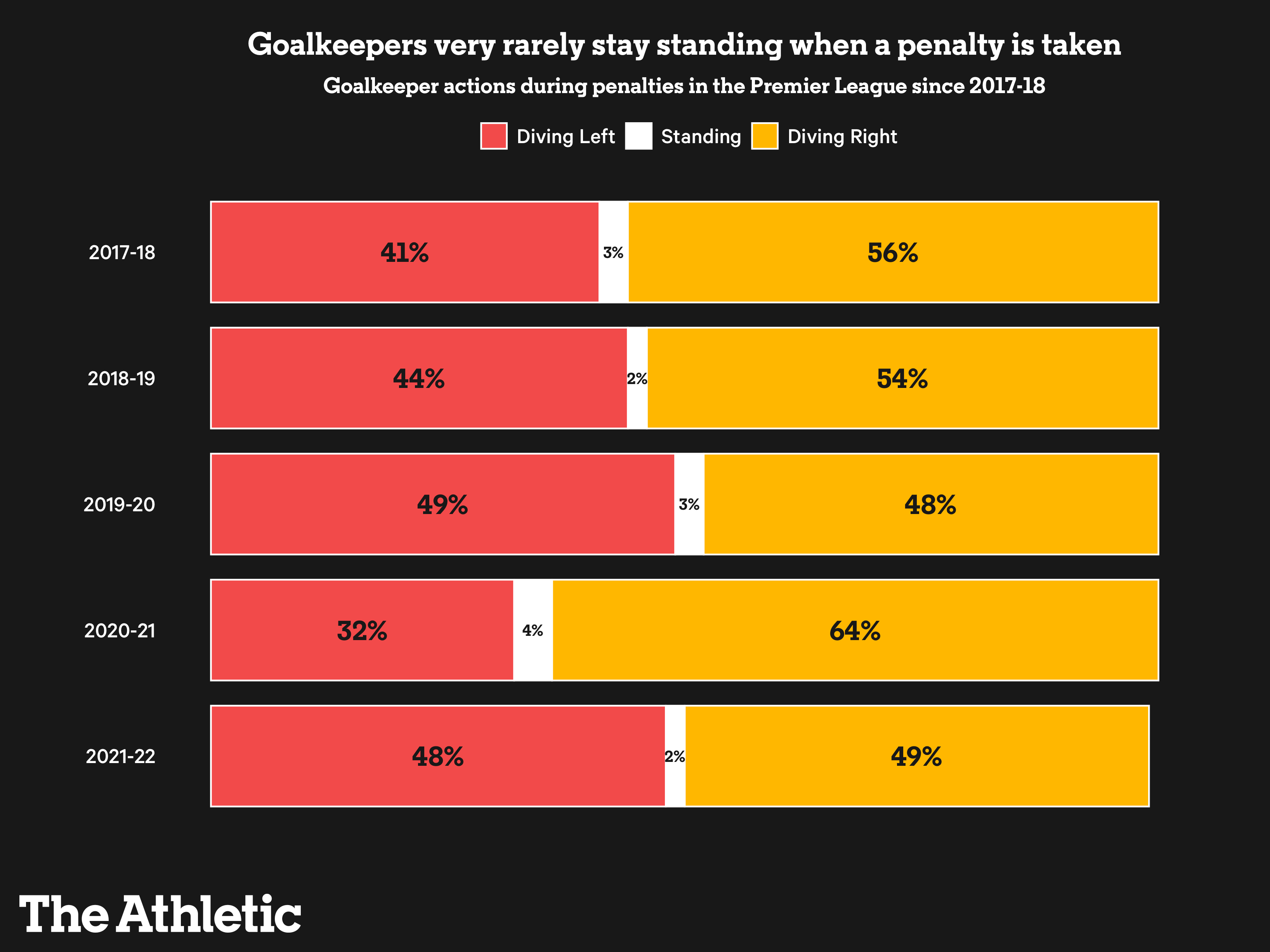 It would be a brave strategy for goalkeepers to stand their ground given the split-second decisions they have to make in this situation. Therefore knowing the infrequency within which it occurs, penalty takers should arguably look to strike towards the central location that goalkeepers so often vacate.

Research has dug into the interplay between penalty and penalty taker and their decision-making strategies. Who blinks first? Is it optimal to wait for the goalkeeper to commit, or stick to your spot?

“I never let the goalkeeper affect where I wanted to put my penalty, even if he was standing a yard to the right-hand side,” Shearer says. “It’s a matter of mind games. The worst thing you can do — and I know it’s an old cliche — is change your mind at the last minute.”

The former England and Newcastle striker would back himself to score, usually striking to the edges of the goal. What his opponent did was irrelevant — this is known as “the goalkeeper-independent method”. However, the Benzema penalty — and the stutter runs used by Bruno Fernandes and Jorghino — are cell-dependent. Whoever is taking the spot kick is relying on the keeper moving one way, and spotting it, so they can score in the vacant part of the goal.

With a 78 per cent conversion rate, the odds are heavily stacked in favor of the penalty taker — arguably too generous a reward for certain fouls in certain parts of the area. But With increasing scrutiny of analysis and preparation from goalkeepers, the element of surprise can go a long way. So the ruling-dependent technique can be devastating, even if it runs the risk of disaster. And with recent data — from the Premier League at least — showing most keepers move the vast majority of the time it was, arguably, safer to hit the ball high and down the middle (even with a floated chip) as there is a larger area at which to aim.

“Not once did I think that Benzema was going to do a Panenka down the middle in such an important game — after he’d recently missed penalties,” Shearer says. “I suppose he’s taking the law of average out of it and thinks, ‘Well, the keeper doesn’t think I’m going to do that, I’m under pressure because I’ve missed, Manchester City will have done their homework ‘, and the last thing Ederson thought he would do would be to dink it down the middle.”

This feeds into the wider point about the psychological warfare that a penalty brings. For all of the technique, data and rational thinking, Penalties are so heavily entrenched in mind games.

Deception is key, especially outside of domestic competitions.

“At international and European level, the process would be slightly different because we would always train in the stadium the night before a game. Knowing that someone in that stadium is going to be watching you training,” Shearer adds.

“There was always an opposition team member watching us train, so I always used to get the reserve keeper and hit 10 in the opposite side to where I was going to go the following night — knowing that someone would report back and say, ‘He practised penalties last night and he put 10 to the keepers left’.” 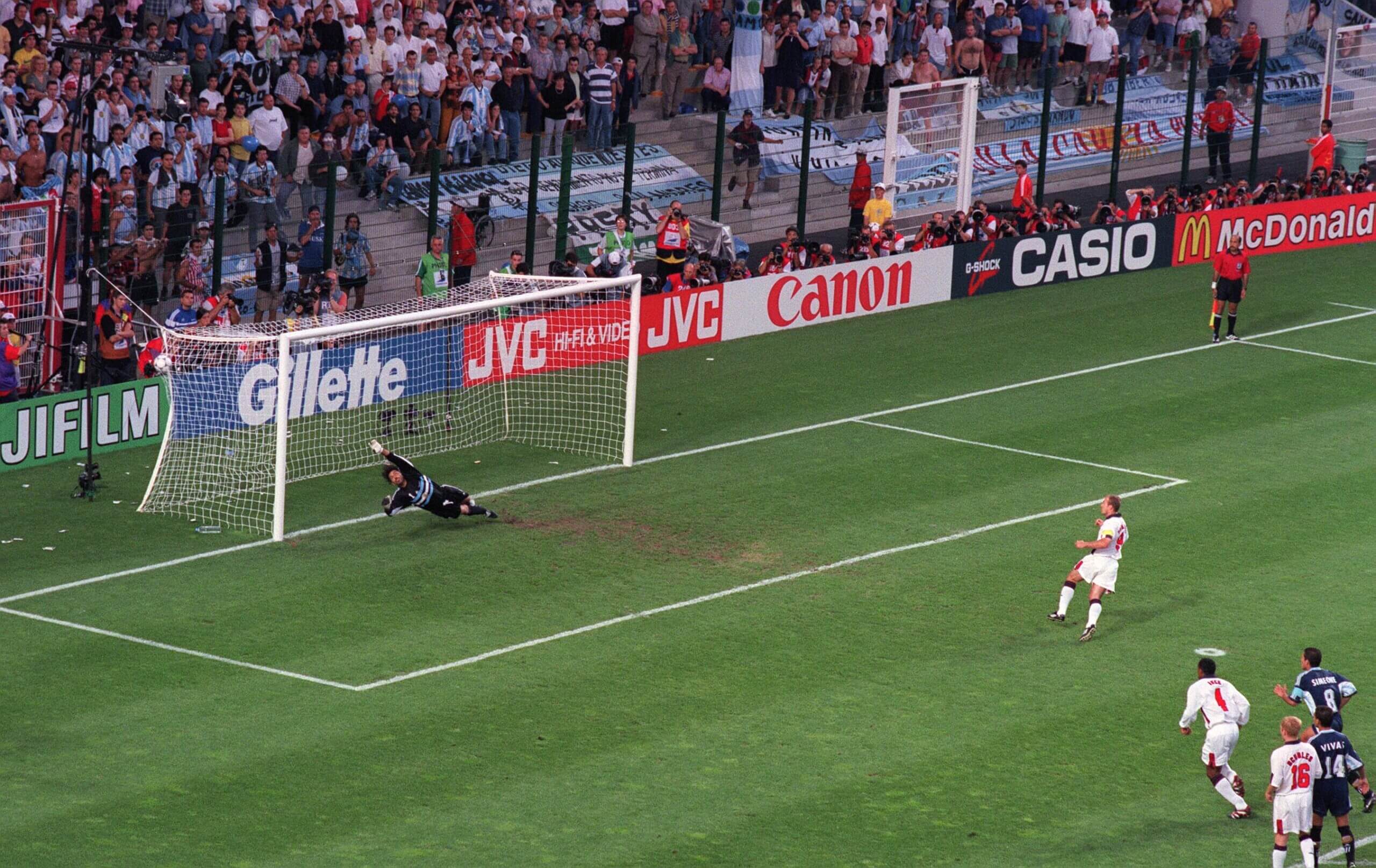 Shearer scores his first penalty for England against Argentina in the last 16 of the 1998 World Cup. He puts it out of Carlos Roa’s reach (Photo: Mark Leech/Getty Images)

With penalty shootouts a realistic possibility in the upcoming knockout games, an added variable comes into play. If you take a penalty in regulating time, do you stick with the same spot in the shootout?

Rifled into the roof of the net, Shearer’s choice was validated. For shots such as Benzema’s last week, the risk of shooting higher was larger than a low strike to the corner, but the reward was clear to see — the data simply supports it.

The match-day program is rarely the place where a club chooses to air their dirty laundry, so Liam Cooper writing about “frank conversations” in the aftermath of Leeds United’s defeat