Lees: ‘With Corberan I’ve stepped outside my comfort zone – and learned so much’

A year ago, Tom Lees was facing an uncertain future.

Into the final few weeks of his contract at Sheffield Wednesday, he had suffered a season-ending ankle injury just as clubs were tightening their financial belts because of the COVID-19 pandemic.

Offers from elsewhere that had been made before the Birmingham-born defender landed awkwardly in a 3-1 defeat at Middlesbrough, ruling him out for the remaining two matches that sealed Wednesday’s relegation to League One, were suddenly off the table. Lees understood why, but that didn’t make the prospect of joining football’s legion of free agents in such a difficult market last summer any easier.

“I was worried,” says Lees, who has emerged as a mainstay of Huddersfield Town’s push for a Premier League return since joining Wednesday’s Yorkshire neighbors in August.

“Everyone thought the first season with COVID and lockdown would be the worst. But, really, it was last summer when the clubs really felt the impact.

“Anyone coming out of contract, I’d imagine they really felt it. I certainly did. I had something sorted but then the injury — and it was quite a bad one — happened. The offers just went.

“That’s the nature of the business, especially coming off the back of COVID. Finances are tight. Paying someone who isn’t fit enough to start (pre-season) training straight away becomes an issue. Definitely not an easy time.

“I knew my only chance was to prove I was over the injury. I worked so hard to get myself fit, knowing if I did that, then I could hopefully contribute somewhere.”

Lees has certainly done that. He didn’t sign for Huddersfield until August 1, the first day of their season; Coincidentally, just a few hours before his new employers beat previous ones Wednesday in the opening round of the Carabao Cup.

His debut came 16 days later, at home to Preston North End, as Huddersfield claimed the first of 23 victories in a 46-game league campaign where they have confounded the books — only Blackpool and Peterborough United, two of promoted sides, had longer odds to win promotion before a ball had been kicked in August — by finishing third, just six points off the automatic places.

Luton Town now await Carlos Corberan’s men — who took four points from the two regular-season meetings without conceding a goal — in the play-off semi-finals, with the first leg taking place at Kenilworth Road on Friday.

“We have had a very good season but we want to make it a great season,” says Lees, 31, who started his career at Leeds United after joining their academy as a young boy. “We are the underdogs. Everyone seems to have been waiting for us to drop out, probably since Christmas. But here we are.

“At times, it has been frustrating to be watching games (on TV) and there is no mention of us when it comes to the debate about who will go up. But we should embrace the fact no one expects us to be here.”


Will it be third time lucky in the Championship play-offs this month for Huddersfield’s Tom Lees? (Photo: Robbie Jay Barratt – AMA/Getty Images)

Such an attitude certainly served Huddersfield well five years ago when all the talk before the play-offs centerd on Slavisa Jokanovic’s Fulham, the lovely football being played by Reading under Jaap Stam and whether a Wednesday side featuring Lees could go one better after losing the previous year’s final to Hull City.

David Wagner’s men simply ignored all the outside noise to prevail on penalties against Wednesday at Hillsborough and then again when they met Reading at Wembley.

“We are in the play-offs for a reason,” Lees says. “Now, we have to give it absolutely everything, dedicate every second of the day to these few weeks, as the rewards are huge.

“You never know when you might get this chance again.”

“He’s probably the definition of the phrase, ‘Student of the game'”. Every second of his day is football, he’s absolutely obsessed.”

Lees is talking about Corberan, the charismatic Spaniard whose remarkable recovery job at the John Smith’s Stadium has been achieved by putting into practice lessons learned from some of the game’s very best.

Most recently a member of Marcelo Bielsa’s staff up the road at Leeds United, Corberan had previously studied Pep Guardiola’s methods so intently that moving to Saudi Arabia in his 20s to learn under key members of the two-time Champions League winner’s inner circle seemed perfectly natural .

Corberan’s methods have transformed a club who had spectacularly lost their way after staying up against all the odds in that maiden season in the Premier League under Wagner — Huddersfield had won just 18, and lost 59, of their 100 league and cup games preceding his arrival in July 2020.

“I feel lucky to have learned so much this year,” says Lees, who is closing in on a career landmark of 500 league appearances. “Carlos has helped me step outside my comfort zone, which is definitely something I had to do.

“I needed to broaden my mind. I’d probably been a bit guilty in my career of thinking, ‘This is the Championship and this is the way things are done’. Coming here has made me much more open-minded to new ideas.

“I’ve learned so much from him. He’s always watching football, clipping football, and gathering examples that he can then show you about what he has learned. Everyone talks about Bielsa’s influence, but there is definitely more to it than that.

“He takes things from coaches all over the world. We watch football from lots of different leagues. The manager is always coming to you with ideas or something he has seen and saying, ‘You can incorporate this into your game’.

“The way this manager works is very different to anything I’ve ever experienced before. Even in my first couple of meetings with Carlos, I came out thinking, ‘I’ve learned loads there’. I have been playing a long time and had heard a lot of people’s thoughts on football but here was something genuinely new.

“Huddersfield’s success can only help the manager going forward, too. Players will think, ‘Look what he’s achieved — if I do open my mind and listen to him, he can develop me as a player’.”

Lees is in his 11th consecutive season as a Championship player with Leeds, Wednesday and now Huddersfield. Before that, he had spells on loan in League Two with Accrington Stanley and Bury, winning promotion with the latter in a 2010-11 season where he was elected their players’ player of the year.

He also has six England Under-21s caps from his Leeds days, including when he was one of only two non-Premier League players in a squad for the 2013 European Championship that featured future senior internationals Danny Rose, Jordan Henderson, Jonjo Shelvey, Wilfried Zaha, Nathaniel Clyne and Jack Butland. 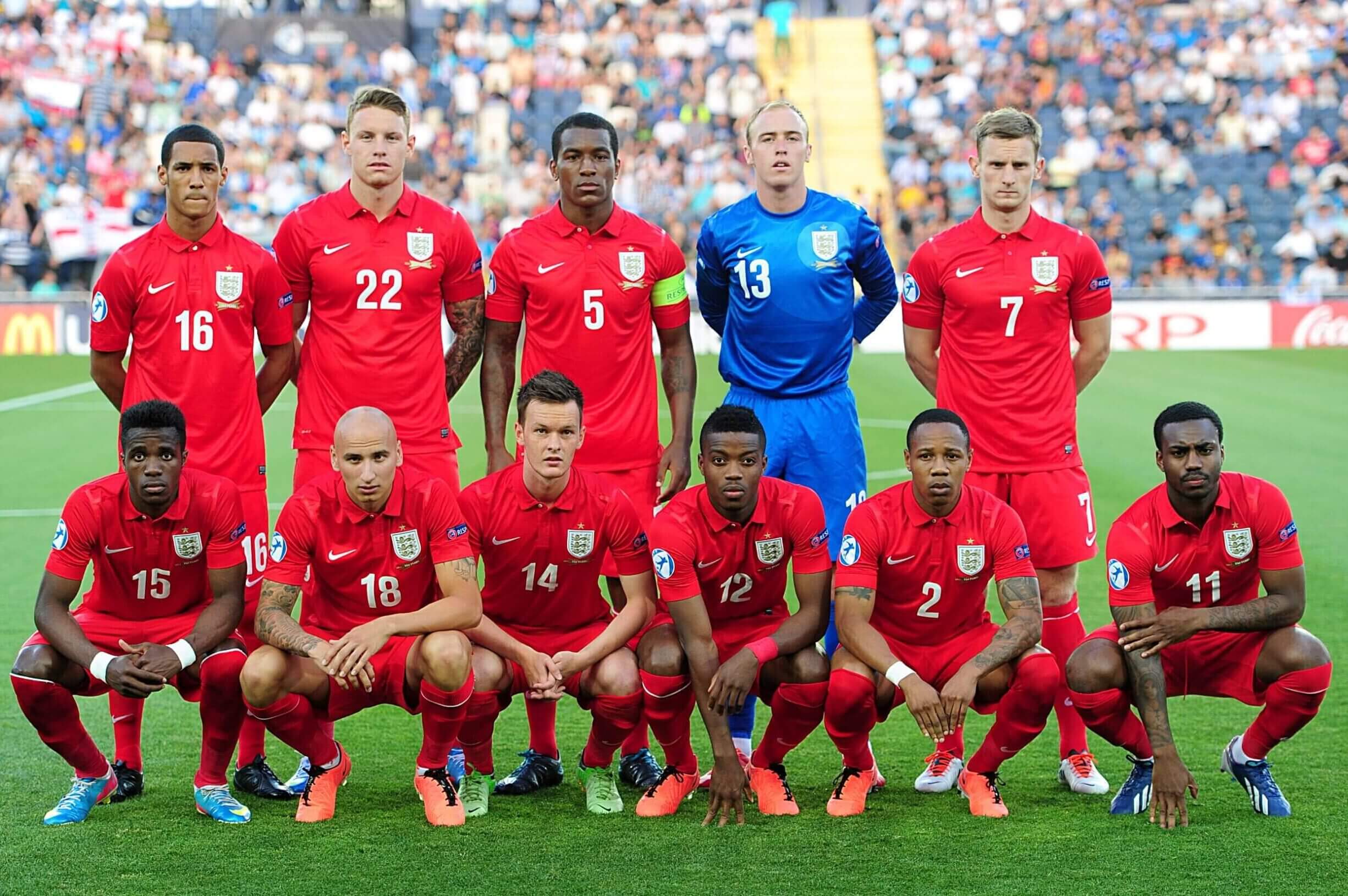 Lees, No 7, rubbed shoulders with some big stars of the future at England Under-21 level (Photo by Adam Davy – PA Images via Getty Images)

Lees, a huge boxing fan, perhaps appreciates more than most how much Huddersfield have been punching above their weight again this season. After finishing 18th and 20th in the second division in the previous two seasons, recruitment last summer was restricted to free agents and loans, meaning they had to find an edge in such a competitive market.

For instance, the pitch to sign Chelsea’s Levi Colwill on loan last summer included a detailed presentation to the European champions and the teenage defender as to how he would be and developed if he came to Huddersfield. Similar efforts went into securing Norwich City’s Luxembourg international Danel Sinani and Tino Anjorin, who followed Chelsea colleague Colwill north in January.

Lees, as a free agent, might not have expected a similar level of focus on his own game. But Huddersfield again left no stone unturned in their attempts to get him on board.

“Huddersfield are very progressive in their thinking,” Lees explains. “Very modern in their approach. I was shown what the club calls an ‘Individual Development Plan’ for a couple of their players. Basically, outlining what they have done to develop these players.

“They also showed me what they thought could be done with my game. I found it really interesting and I’d say people have probably seen a different side to my game this season as a result of coming here. Particularly, in terms of what to do with the ball.”

This desire to try something new may yet take Lees all the way to the Premier League.

A 1-0 defeat to Hull City at Wembley in May 2016 was followed by that semi-final loss on penalties to Huddersfield 12 months later. Both stung badly — Lees’ own-goal late in the second half of the decider at Hillsborough was the only one Huddersfield scored in the tie — adding to his determination to make it third time lucky this month.

“My big memory is how intense the play-offs can be,” he says. “That and a bit of a lottery. It can come down to one decision, one mistake, one fantastic piece of skill. Just something on the day that you can’t legislate for.

“Having said that, I do believe being there a couple of times already will help me. Make me that little bit more relaxed.”

With an 18-month-old toddler intent on causing mischief at home, Lees admits relaxing away from the games isn’t always easy. The Athletic‘s suggestion that keeping track of Lees junior might be harder than marking most championship strikers brings a knowing smile before he quips: “He’s quicker than some as well!”

In truth, Lees has proved more than a match for the second tier’s best forwards.

Alongside mainly Colwill and Matty Pearson — also signed on a free transfer last summer, in his case from Luton — he has helped Huddersfield keep 19 clean sheets in the league this season, a total bettered only by Bournemouth (21) and Sheffield United (20 ).

Just 47 goals have been conceded, seventh-least in the division. That’s in stark contrast to last season, when Corberan’s Huddersfield had the leakiest defense in the Championship, being beaten 71 times.

Now, the challenge is to maintain that form in the play-offs as Lees looks to bring the curtain down in style on a 12 months that began last May with those worries over his future.

“It all seems a long time ago now,” he says about that ankle injury which brought an abrupt end to his seven years playing for Wednesday. “But things have definitely worked out. I’m so glad I was able to prove my fitness and get this chance.

“At the time, Huddersfield seemed a really well-run club and something to get involved in. That’s how it has been.

“I can’t say I totally expected this. We have done a bit better than even we probably expected. But I knew there was a chance of things going well.

“Now, we just have to finish the job. Whether you are 31 or 19, you never know when an opportunity like this might come again. We have to take it.”

To the right of Rodrigo was Jack Harrison, asking for a simple pass forward. Rodrigo swung a foot and prodded the ball into touch, to the sound of venting voices