Leeds United and relegation watch – one day on Twitter

Nine o’clock on Wednesday morning, bang on the dot. So bang on the dot, in fact, that it’s almost as if the tweet was scheduled. “What’s everyone’s plans for tomorrow night? I have no intention at all of watching the games so I might put the phone on flight mode and meditate for 2 hours.”

This is @LUFC_WorldWide, or Stephen Fitzpatrick as he’s known to his real friends. I met Stephen two years ago and he won’t mind me saying that he easily makes it onto the list of Elland Road jinxes. It took him 14 trips from Ireland and more than £5,000 in travel expenses to see a victory under Marcelo Bielsa in the flesh; Bielsa, whose win ratio at Leeds United exceeded 50 per cent for three years. Relegation and Leeds are in awful danger of mixing. Fitzpatrick in flight mode and a state of meditation might be the safest plan.

But 9am on Wednesday, the best part of 36 hours before the start of two matches that Leeds aren’t even playing in? Let’s just say that Leeds have become all-consuming again. It’s Aston Villa versus Burnley on Thursday night and, further north, Everton versus Crystal Palace. Leeds can’t be relegated there and then but, like Begbie with his pool cue, there’s a point where you know you’re going to get it no matter what. Will Thursday be the night? Or is there some way out of the scrape?

Professional football; the most sociable of sports but also the most desolate when it leaves you clinging to voices you don’t know and intermittent updates on Twitter, social media torturing the blind.

I’ve covered games using Twitter for 10 years and, honestly, I had no idea how badly it dangles you. Sky Sports, belatedly, have decided to televise the Burnley game, which is a bonus or a curse depending on your constitution. Results of a poll set up by Adonis Storr (@theadelites) find that 32 per cent of Leeds supporters will watch it. Ten per cent say they plan to ignore it, like walking into a pub and pretending you won’t have a drink, and 28 per cent are hiding behind the sofa. The rest will do that thing where they try hard to limit themselves to sporadic updates on a mobile.

Up pops Rupert Trousers (@RupertTrousers2). Brown trousers, hopefully. “I have to be honest. I’m shitting my pants already,” he says. It’s just past 9am on Thursday and if Rupert thinks Twitter will act as surrogate Imodium before kick-off at Villa and Goodison, think again. Further down the feed, someone has put fresh batteries in Glenn Hoddle. “I’m scared for Leeds,” Hoddle is quoted as saying. Not now, pal. It’s bad enough round here without your gift of foresight.

I have to be honest. I’m shitting my pants already #lufc

Weird and wonderful superstitions are at play. Jackie Courtney (@JackieC42533698) has left her Christmas tree up on the basis that doing the same for so long last season helped, or coincided, whatever, with Leeds finishing ninth. She’s got the curtains half-closed. “The neighbors already think I’m off my rocker,” she says. CJ Slater (@CJ_Slater16) tweets a photo of someone — him? — chained to a door in a Villa shirt and a gimp mask. “How I’ll be supporting Villa tonight,” he tweets, because that will probably do it.

Marriages of convenience are developing between clubs with a particular love for each other. “Always been a fan of Palaces and Villas,” says Connor (@CJM_LUFC), though the expressions of truce look fairly flimsy. WHITESOLDIER (@whitesoldier62) goes in with two feet. “All this Villa love is going to turn into hate in a few hours,” he says. That’s the spirit.

Joe Layton (@jay_layts is killing time by writing a prayer. Not sure about it but it’s the best on offer: “Lead us not to relegation but deliver us from the EFL, for thine is Coutinho etc etc…” Coutinho will be on the bench but anyway, if God be for us then who can be against us?

For Leeds, in 17th place, the permutations are kind of complex, kind of simple. James Cockerham (@h_cockerham) has it covered: “If Villa can do us a favor on Thursday, I fancy Newcastle to perform on the last day… mind you, if Palace beat Everton, they have a tough final fixture… saying that, if Burnley get a point…” Yeah. Just no one mention the goal difference. No good will come of that.

The last time it was anything like this, Leeds were going up. It was 2020 and an entire fanbase watched Huddersfield Town beat West Bromwich Albion on the telly, with no team on the pitch but every cell of skin in the game. Towel-swinger Matthew Ford (@fordmatt93) destroyed a washing line and almost got himself divorced. Twitter was at its best. That was fun and football can be fun. This is shite. Rob Rod (@rodadod) tweets an image of himself driving into Villa’s training ground, presumably by chance. Feel free to take hostages. And use the ransom money to buy a centre-forward.

Just been to rally the lads up for tonight’s game. Garry Mac says he’ll get the job done for us #UTV #LUFC @TheSquareBall pic.twitter.com/WI02VqcVgv

We’re all too pure to pick up illegal streams of the Everton-Palace so it’s Burnley on the laptop. Keiran (@Keirangraham19) has stumbled across Sky’s warm-up, a replay of the Championship play-off semi-final between Leeds and Derby. If you want to see footage of your house burning down, that can be arranged too. It provides nothing other than flashbacks of the climb and the blood-letting, the trek to the Premier League anthem, NFTs and Mike Dean on the VAR joypad.

“Never wanted us to be relegated more from a league I desperately want us to stay in,” tweets Andy P (@ArcticReviews) and that, right there, is the irony of the situation. Elland Road and commercial sheen. It’s not exactly horse and carriage. But it’s not the donkey derby either. 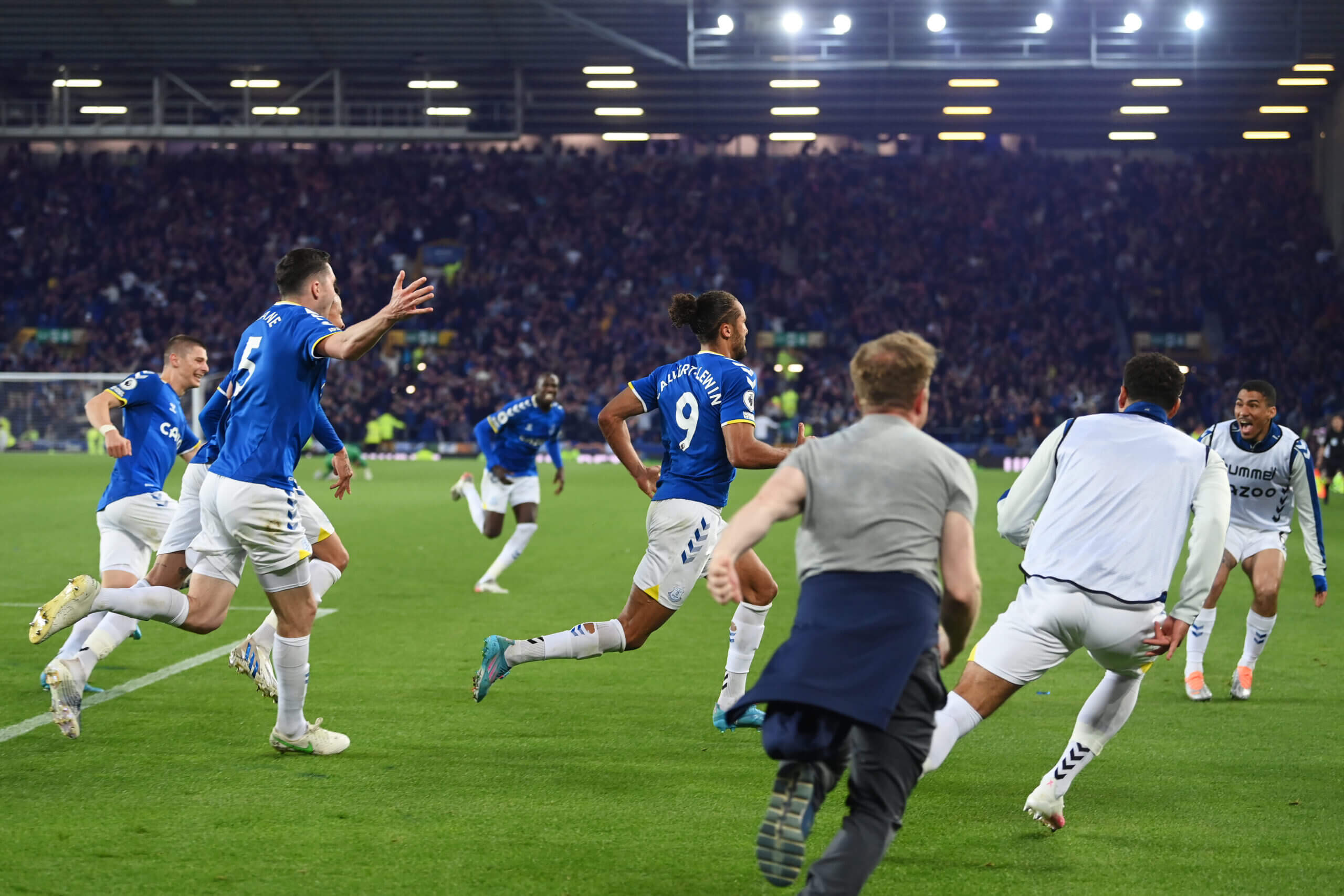 By now, an hour before kick-off, @LUFC_WorldWide has done a five Euro double on Burnley and Everton wins, that old chestnut. Flight mode hasn’t kicked in yet.

Steven Gerrard’s line-up looks alright but Philippe Coutinho and Danny Ings are substitutes. Palace have benched Conor Gallagher at Goodison. “We are done,” says Ben (@BenClufc), with all the promise of Rebekah Vardy’s court coverage.

There’s a bit of #UTV (Up The Villa) which everyone has learned in the past 24 hours and straw-clutching is in full flow. “Have I ever felt this sick on a day #lufc haven’t been playing,” asks Rev. A Mol (@RevAMol) and the answer to that is most likely yes. But it’s incredible how tension can generate affection with hindsight.

Palace go 2-0 up quickly. All good. Villa go 1-0 down when Emi Buendia makes two stabs at giving away a penalty and succeeds with one. Very bad. “Fair play to Buendia, didn’t get his head down when he wasn’t penalised first challenge,” says It’s Would Have, Not Would Of (@MuzzyHillbilly), a tweet that has the advantage of being printable. Then Buendia equalises and even MrPaulRobinson (@MrPaulRobinson) is being complimentary about him “despite spending the last 15 minutes sticking pins in his voodoo doll”.

How I’d rather be spending my evening #lufc pic.twitter.com/032Kp5ndam

But you blink and it’s 2-2 at Goodison, then 3-2 to Everton which is how it ends. Like that, Everton are safe. “I switched off, decided that watching these games was like doomscrolling, but now I’m back,” says emphulio (@emphuli). “I hate this feeling.” True, but what can you do?

Minutes tick by and the minutes run out. It finishes 1-1 at Villa Park, mostly because of Nick Pope but also because of Tyrone Mings’ ridiculous block to deny Wout Weghorst, Birmingham’s version of Ryan Kent for Rangers in Seville.

One game to go, then, and Leads either summon something at Brentford on Sunday or face the music; a place where, as The Athletic‘s Amitai Winehouse (@AmitaiWinehouse) points out, they haven’t won “since rationing ended”. It leaves no choice but to sign off with a tweet from November, written by yours truly (@PhilHay_): this season is going to kill everyone.

By the end of the week that Leeds United bit the bullet and changed head coach, the cost of their absences was beyond extortionate. With 12 games still to play,