Leeds United’s season is over, to the relief of everybody, and it remains to be seen how the city remembers it.

Will the sacking of Marcelo Bielsa be the lasting imprint of 2021-22? Or will it go down as the year of the great escape in which Brentford away on Sunday overrode everything?

Maybe, when all’s said and done, the less said about it the better.

Leeds have walked barefoot on broken glass over the past nine months, in danger throughout and spared relegation by the machinations of a mad final day.

This is how The Athletic saw it: the highs, the lows, the desperation, the ecstasy and everything else in between…

Best moment of the year

Brentford — and in no small way because the mood heading to London for Sunday’s decisive season finale was one of total resignation. Supporters I spoke to before kick-off, with virtually no exceptions, thought Leeds were as good as down. Even those who tried to say otherwise admitted that they were talking with their hearts rather than their heads.

But the thing about Leeds — and we saw this in the 2019-20 Premier League promotion season — is that when it all comes together, they can be unstoppable.

Nobody wants in-fighting and nobody wants the feeling of dejection. There is plenty of criticism to be done of the way the club handled the past nine months but the emotion at the final whistle in west London at the weekend is what underpins this crazy entity.

I’ve said it before and I’ll say it again: A lot of people seem to take pleasure in seeing Leeds implode.

Worst moment of the year

Bielsa’s sacking. As the Argentinian’s reign as head coach got better and better, it occurred many times that losing him would be a monumental step — one Leeds could never reverse and regret might at leisure. He was the most popular Leeds boss in a generation, immensely devoted to his work, and the struggle to find any lasting form this season must have been torture for him.

Nothing is for ever though and it had to end one day, but if the last few months have shown anything, it’s that Leeds were underprepared for the reality of moving on from him. Appointing Bielsa was a huge decision. It turned out that replacing him was an even bigger step.

You know that he’ll be quietly delighted that the squad saved themselves at the death.

Biggest surprise of the year

As above. Not because Leeds weren’t in trouble when they sacked Bielsa in February, because they patently were, but because there was hardly a coach in Europe with a more solid position than his when the season began.

Bielsa had reached the stage where he looked untouchable and as difficult as 2021-22 became, it seemed that, at the very least, he would still be in charge at the end of it. Even the club were showing no inclination to change manager until the early stages of February.

That spell from Everton away through Manchester United and Liverpool brought everything to a head so quickly.

🤩 “Gelhardt is the hero!” pic.twitter.com/wh1RT4tjuu

But as the dust settled on that finish, all you saw around the press box in the West Stand was people in hysterical laughter — completely unlike Pascal Struijk’s equaliser against Brighton a month later, which left people looking like they needed a lie-down.

Goal of the year

Struijk versus Brighton. I mean, the best goal was Gelhardt’s at Chelsea in December. Everything about that Gelhardt strike — the build-up, the patience, the movement to the near post — was fantastic, especially because he had been on the pitch for 60 seconds when he scored.

But in the end, it was Struijk’s header that injected Leeds with hope just when everything seemed lost; a finish from a couple of yards out that basically came off someone’s as it bounced over the line (albeit helped by pure magic from Gelhardt on the other side of the penalty area).

It stopped a meltdown, it kept Leeds in the hunt, and very few moments mattered more.

🤯 The assist! The header! The limbs! pic.twitter.com/Bu9w8RIe3y

Game of the year

It’s almost impossible to explain those 90-odd minutes except to say that Raul Jimenez bought himself a red card and everything went haywire after that: Luke Ayling doing the Robbie Keane, Wolves’ hitherto excellent defence made to look like a group of people who had met for the first time in the car park earlier that Friday evening, supporters upside down in the away end as bodies went in all directions.

It’s safe to say that in the aftermath of that result, everyone thought the season might let Leeds off more lightly than it did.

Quote of the year

“Enforcing upon football a philosophy akin to Maoist collective agriculturalism — which students of The Great Leap Forward will know culminated in the greatest famine in history — will not make the English game fairer, it will kill the competition which is its very lifeblood.”

Club programs are traditionally benign and safe. This, from Leeds’ chief executive Angus Kinnear on an independent regulator for the Premier League, was straight out of the Ken Bates manual of match-day columns.

The piece I most enjoyed writing

The interview with Adam Forshaw we ran in January.

It was perfectly obvious to everyone that Forshaw’s struggle with injury had been a nightmare but you can never fully appreciate the nature of an ordeal like his until the player concerned spells it out in fine detail.

I’d wanted to speak to Forshaw about it for a long time and it was eye-opening to learn how much he had been through to get over the strangest of injuries.

That he such a conduit for public frustration — touted as the central Leeds failed to sign in the transfer window last summer — was never his fault. And upon returning, he looked good. 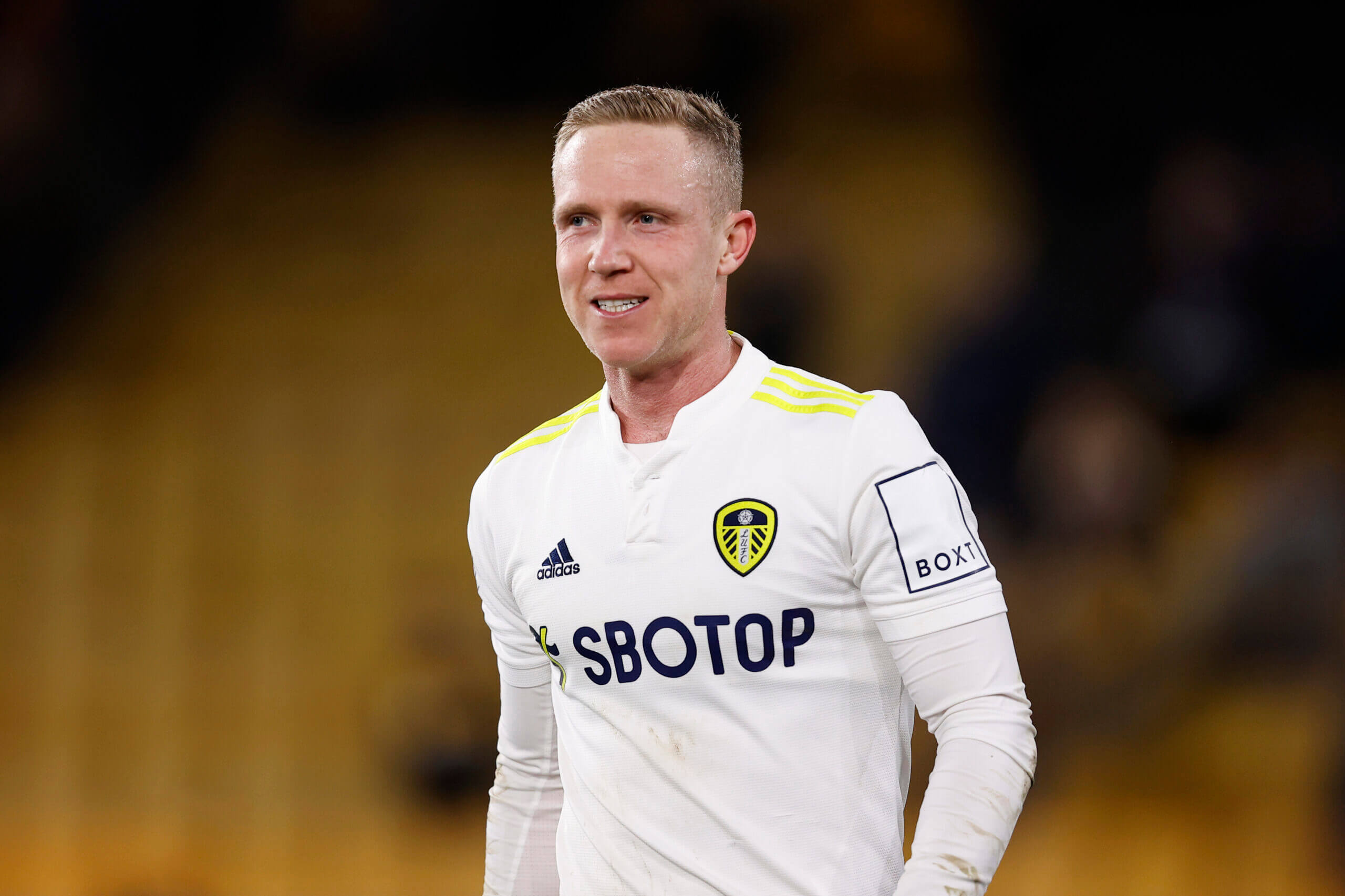 Which GIF sums up the season?

A few weeks ago, someone tweeted the clip from Austin Powers where he runs over a screaming security guard with a steamroller. There are about 50 meters between them before impact and it’s hard to think of a better way to define the pickle Leeds got themselves into.

In the end, a very fraught relegation battle felt like it was coming from a mile off, trundling down the road. Fortunately, it was Burnley who got flattened on Sunday.

They really ARE dirty Leeds! Jesse Marsch’s side hit a landmark CENTURY of cards in one Premier League season following Dan James’s red and Kalvin Phillips’s yellow against Chelsea –