Leads’ task harder after losing three wings in one game

Here they are, then: in the red zone as red cards come from all angles. Leeds United hoped to be coasting by now, to have at least one game at home where the football could do as it pleased, but Sunday is when the proverbial gets real — almost the last-chance saloon.

Lose to Brighton this weekend and a Burnley win at Tottenham could pack Leeds off to the EFL, the land they thought they had left behind for the foreseeable future, if not forever. Clinging to goal difference would be like trusting the airbag as your car spirals off a cliff. If deliverance is destined to come from somewhere, it can only come now.

Results might as easily push this on to the final game of the season away at Brentford but jam tomorrow is the cry of a club who are delaying the inevitable as time runs out. Leeds were short of it when they plumped for Jesse Marsch as head coach 10 games ago. They are absolutely devoid of it now, with no choice but to conjure one last defiant push against Brighton.

In these moments, who would swap places with a manager? Apparently heading for safety in the second week of April but fearing the worst by the second week of May; Marsch will ask himself if the post-match serenity at Watford was real, how Leeds went from asking questions of others to being hit with all the questions themselves, unable to turn up any answers.

Defiance has spilled over into palpable frustration and, for the second time in as many matches, they were a man down before the half-hour against Chelsea last night, demoralised by the dismissal of Dan James. There is a tub-thumping edge to Marsch’s rhetoric but the fission in James’ challenge on Mateo Kovacic went well over the top — a fired-up indiscretion in a 3-0 defeat that Leeds otherwise sucked up limply. There are red lines in football and Marsch’s team are falling on the wrong side of them, them at risk of falling on the wrong side of the biggest.

Brighton on Sunday will have to be different, a day where discipline is immaculate and Leeds keep their heads. It is merely the starting point for a side who have to play so much better too and show little sign of having a performance in them. James’ dismissal was additionally problematic because by full-time Marsch had gone from having three senior wingers to potentially having none, with Raphinha and Jack Harrison injured. That he has been playing James up front and Raphinha deep on the right does not change the fact that going for broke seems harder than ever with a badly compromised squad.

James, Marsch said, was insistent that he “didn’t mean” to go through Kovacic and the American was no harder on him than he was on Luke Ayling after his red card at Arsenal on Sunday, both incurred by sudden rushes of blood. “Our guys do everything they can,” Marsch said. “They stick together and they fight for each other. I love these players. They fight to the end.

Kovacic aside, Chelsea were in and out without sustaining a scratch and the idea that they would be somewhere else mentally — at Wembley for the FA Cup final on Saturday, to be precise — lasted as long as it took Thomas Tuchel to name his team. Concessions were made, naturally, but in modest fashion. Chelsea would gladly take the FA Cup. In their present state, they might need the Champions League more. There is more charity in the average energy bill than there is between clubs in the Premier League.

What was interesting to note was that Leeds, for all intents and purposes, had narrowed the relegation fight down to them and Burnley before kick-off. Angus Kinnear, the club’s chief executive, described the skirmish as “a two-horse race” and with Everton away to an indescribably awful Watford last night, it did not sound far wrong. Everton came away from Vicarage Road with only a point but it feels like Yorkshire or Lancashire, like Burnley or Leeds. The death strokes will fall on this side of the Pennines or the other.

For five minutes in the build-up at Elland Road, Andrea Radrizzani and Victor Orta stood and chatted pitchside, smiling in the way of nervous men trying not to think about those death strokes. Leeds have found themselves living day to day as a team, surviving on fumes and sucking every gasp of energy from the stands. Elland Road has been a bastion of blind faith but in plain sight Leeds are rattled, unable to keep their battle plans intact for any meaningful length of time and making hard work of 11 players on the pitch.

Manchester City and Arsenal obliterated Marsch’s strategy almost without breaking sweat and Chelsea did the same last night. A beast of a finish from Mason Mount dipped under the crossbar with pinpoint precision after four minutes but the attack and the creation of the chance was painfully easy, at odds with the perception of Marsch reframing Leeds defensively. Like his first home fixture against Aston Villa, the search for improvement post-Marcelo Bielsa drew a complete blank in those moments. The doubt felt the same and so did the paralysis, the errors of judgment, a failing rescue act. 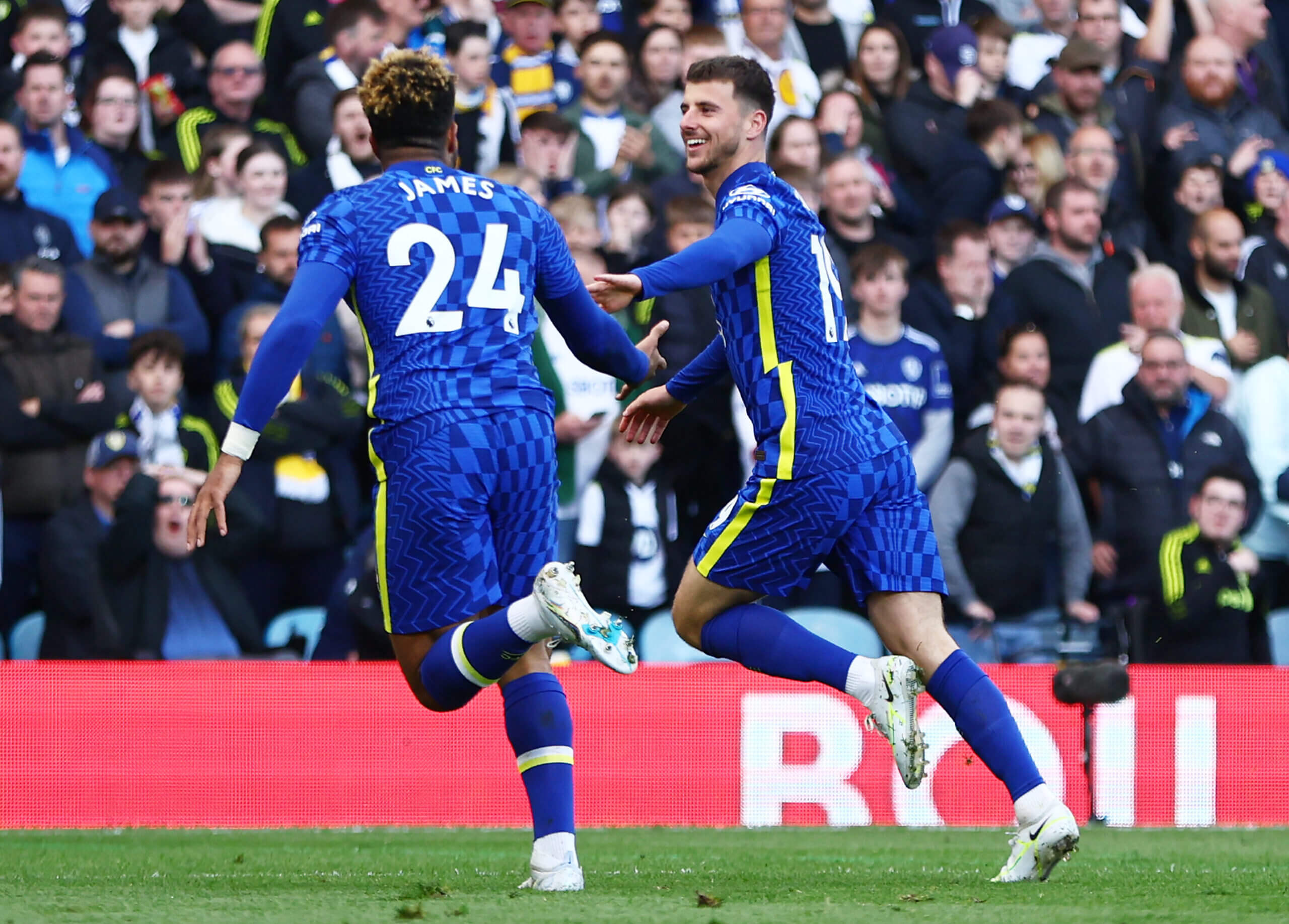 Leeds sat deep and reluctant, even before James’ red card. A back three looked like a back five and Chelsea went at it. As for discipline, it buckled again as James played the part of Ayling by bringing a red card on himself. Ayling’s dismissal at Arsenal was inexcusable, committed in a position where a heavy tackle was needless. James went down the same path, driving his studs into Kovacic’s ankle near the halfway line. He looked shocked at the decision but the replay was damning and his season, like Ayling’s, is done. Players are causing themselves to down tools just as Marsch needs them to stick their hands up.

Others are simply injured, like Harrison who went down in the 37th minute and is probably beyond Marsch’s reach for the meeting with Brighton. Raphinha was taken off with a niggly hamstring in the second half. Leeds, after the refreshing taste of five games without defeat, are back where they were when the season was most bleak, using a schoolboy in Archie Gray to make sure their bench has a full complement of substitutes. Gray is undeniably talented but part of a scenario that is undeniably not for 16-year-olds.

Early in the second half, Christian Pulisic scored a second for Chelsea, giving Illan Meslier the eyes before pinging a shot into the bottom corner, and that was that; game over well before Romelu Lukaku smashed in a third. For both teams, it was almost better to conserve their energy for the test of constitution that lies ahead. Chelsea are off to Wembley. Where Leeds are headed hardly bears thinking about, unless the tank has something left in it.

Marcelo Bielsa likes to read and in his first summer at Leeds United, he asked his players to dip into a book about the success and the psyche of the

Sunday’s Premier League final day is set to stage a hat-trick of mouth-watering affairs, including a title showdown between Manchester City and Liverpool, a top-four skirmish in North London and