Is it time to unleash Joe Gelhardt?

Sunday’s goal was Joe Gelhardt’s first at Elland Road and plans are already afoot to have his match shirt framed. There are memorable finishes and there are goals like his, the cause of pure pandemonium. “It was a big play,” said Jesse Marsch, with just a little understatement.

Marsch jumped up as high as his calves would allow to celebrate it. “In America we call that a credit-card jump,” he joked; so low you can just about slide a credit card under your feet. It was Gelhardt who leapt with the bounce of a trampoline, winning a header he should not have won and setting Leeds United’s 94th-minute attack in motion. Not for the first time, his decision-making made wine out of water.

There was poise and class from Raphinha too, rounding Tim Krul and realising instinctively that the high-percentage decision was to square the ball rather than shoot from a narrow angle, but Gelhardt’s ability to make something of a few short minutes on the pitch is why his fleeting role this season has been such a bone of contention. The argument for holding him in reserve gets harder and harder to make, not least because Marsch’s formation has more scope than Marcelo Bielsa’s to accommodate two centre-forwards.

Leeds were halfway through injury time on Sunday, level with Norwich City and fighting an atmosphere reminiscent of the deathly moment when Alan Lee’s header sent the club down at Elland Road in 2007. Illan Meslier was the starting point of the win, driving a long kick downfield, but there was nothing especially measured about the clearance; just a hit to halfway with Norwich blocking passing lanes on the edge of his box and seconds counting down. The flight of the ball gave Norwich’s center-backs every chance of winning the first header.

At somewhere between 5ft 7in and 5ft 8in, Gelhardt was at an obvious aerial disadvantage, but while Ben Gibson, the defender closest to him, made the mistake of waiting for the ball to come to him, Gelhardt sprang to attack it first with a cushioned header forward. The break that ensued was reliant on Gelhardt finding Raphinha in the right channel with that single touch. Aside from Dan James, no other Leeds player was inside Norwich’s half. 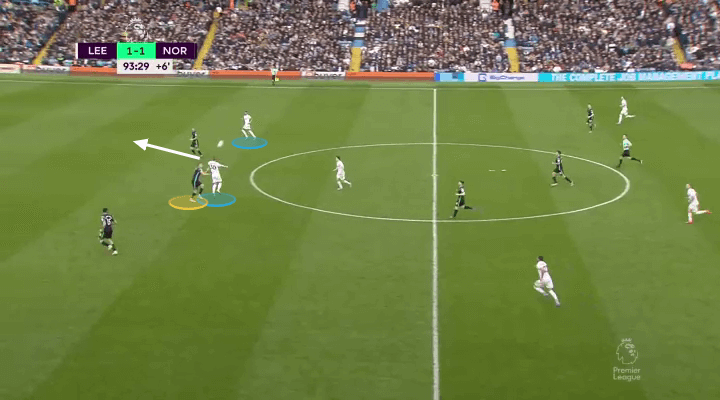 What happened next explains why Gelhardt has been so full of goals for so many years, right back to his days as a schoolboy in Liverpool. Raphinha’s quick feet took out Krul as the goalkeeper raced out to meet him and the first priority of Norwich’s defenders was to cover the goalline. They lost sight of Gelhardt a few yards behind them and Brandon Williams on the far right was concentrating on Raphinha’s next move. 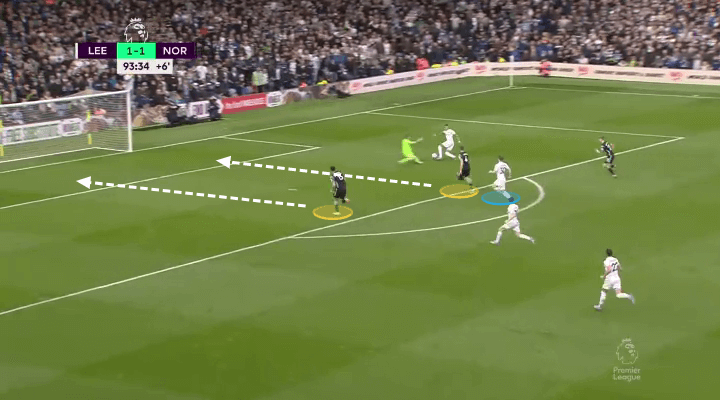 Gelhardt read the situation differently and realised that Raphinha might run too wide to finish himself. If he did, someone should look for a pass at close range. He slowed up slightly, put himself on the money a few yards from goal and was totally unopposed when the ball reached him under the shadow of the crossbar. Ozan Kabak had sprinted back at such pace that he fell into the net, behind the goalline when Gelhardt stabbed the winner in. The chance was unmissable, but intelligently made. 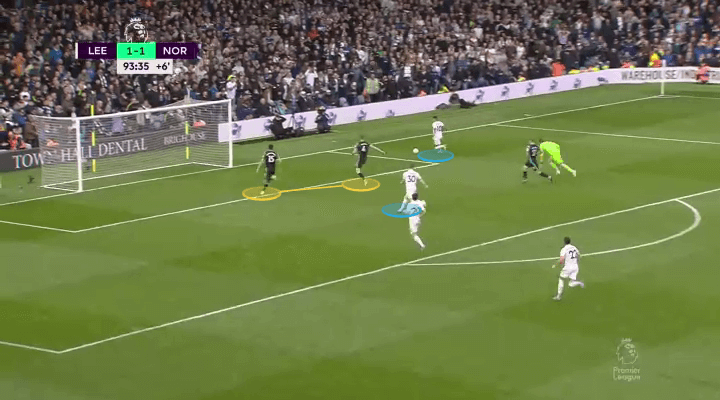 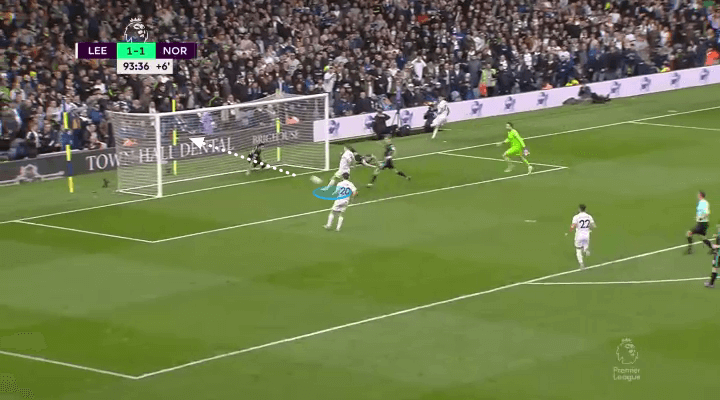 Positioning is a prime part of Gelhardt’s threat in front of goal. He has sharp instincts and he is a very clean striker of the ball, but he also presents himself in areas where the chances of finishing successfully are relatively high. All but one of his 17 shots this season have been taken inside the box (see graphic below) and his two goals — one at Chelsea in December and the other on Sunday — were taken from his highest-quality opportunities, indicating that good service to him will typically yield results. His 3.32 shots per 90 minutes on the pitch is the highest in the squad at Leeds and is well above the average of 2.4 for a Premier League forward this season, though it is fair to say he is often sent on with the express purpose of finding a goal in a short period of time. 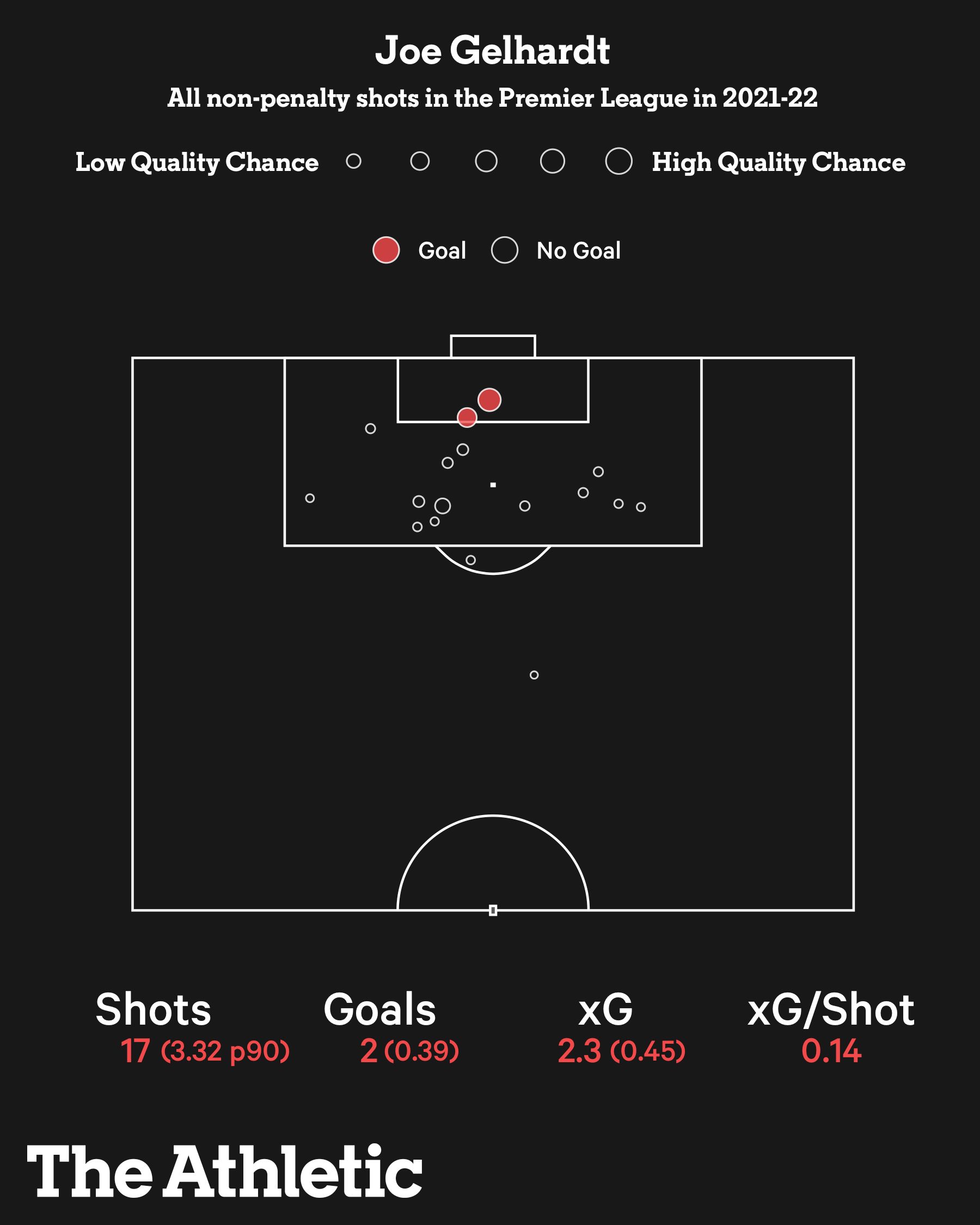 As it stands, Gelhardt has played the equivalent of just over five full matches since August and almost a fifth of his minutes have come in the past three games, the three since Marsch replaced Marcelo Bielsa as head coach. Even so, limited time on the field is not unusual in the Premier League for a player of Gelhardt’s age and experience. As the next table shows, teenage English forwards do not often become regulars overnight. Marcus Rashford was an outlier for Manchester United in the 2016-17 season, but there is a trend of emerging prospects being asked to bid their time — in many cases because of the quality of player in front of them. Bielsa always maintained that he was using Gelhardt appropriately, blooding him as much as he thought was sensible. The problem as Gelhardt made his felt, and while Patrick Bamford was missing through injury, was that he looked and more like an answer to poor results. 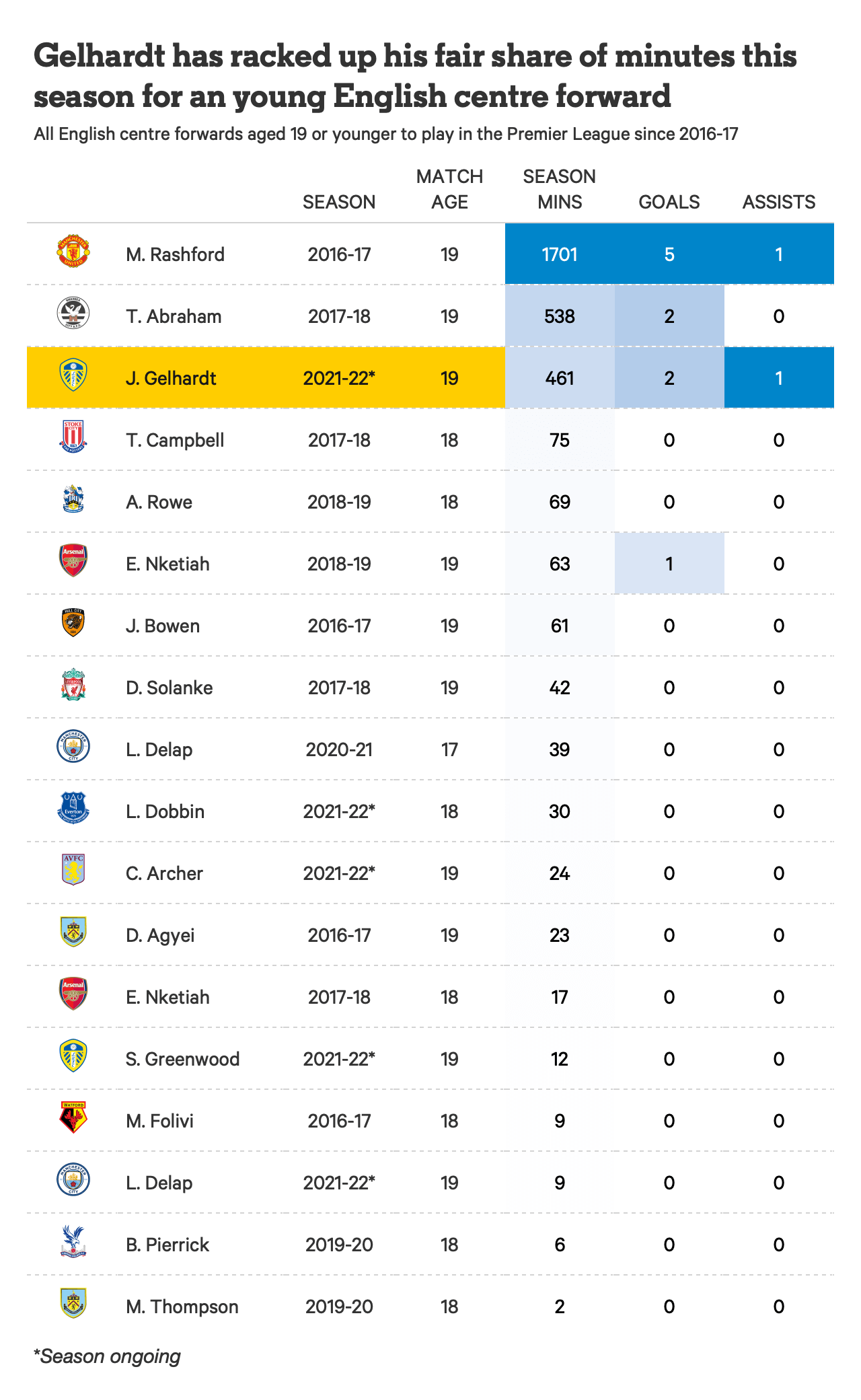 The 19-year-old’s form over the past nine months has pushed him towards the upper end of the list of players who Leeds would like to tie to new contracts as soon as possible. The terms he signed when he moved from Wigan in 2020 ran for four years and the subject of an improved deal has already been broached with his camp, although with Leeds tied up in a relegation fight, negotiations are likely to wait until the season is resolved . Gelhardt’s reputation is on the rise and last October brought his first call-up to the England Under-21 squad, owing to an injury to PSV Eindhoven’s Noni Madueke.

Across Europe’s top five leagues, and in comparison to footballers aged 19 or younger, Gelhardt ranks 11th for goal engagements this season, the combination of goals scored and assists made. The numbers are detailed in the next graphic. They do not factor in the penalties he won against Wolverhampton Wanderers and Arsenal before Christmas — two incidents that led to goals and stand in his favour.

Florian Wirtz, Bayer Leverkusen’s rapidly rising star, is a long way out in front in the list (although his season is over following a knee injury) and Borussia Dortmund’s Jude Bellingham features prominently too, but what is noticeable with Gelhardt is that only Barcelona’s Ansu Fati is ahead of him with fewer minutes played. Gelhardt has seen considerably less game time than most of the players included in the table but has nonetheless succeeded in turning games repeatedly. His winner against Norwich was like his sliding finish away at Chelsea — his first chance buried within moments of coming on. 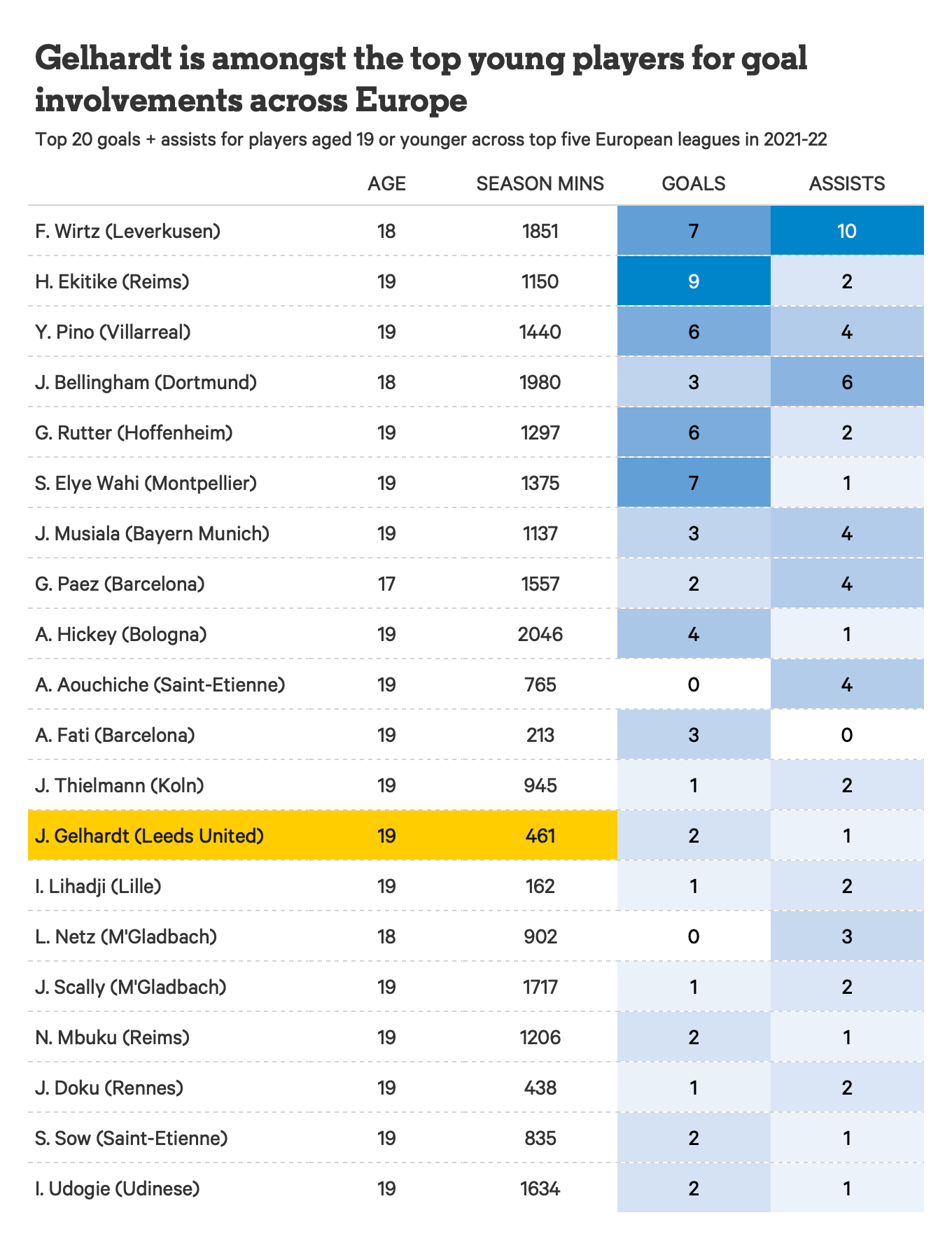 Marsch said after Sunday’s win that, alongside instructing Gelhardt to operate as a No 10 or a secondary striker, all he wanted from him was to “get in the game” with so little time left. It was too late, too tense and too season-defining a moment for tactics to override everything, but it was precise thinking and the habit of doing the right things in the right circumstances that turned a high ball from Illan Meslier’s box into one of the Most dramatic goals Elland Road has seen in years.

Marsch admitted afterwards that there are bigger things in life than football, and he would know, but goals like Sunday’s and players with Gelhardt’s intoxicating potential are why football is such an addictive drug. And so, for Marsch, comes the question asked of Bielsa time and again: how long can you keep him on the leash?

A summer like this at Leeds United has been coming. It was never the done thing to speak too preemptively or explicitly about what is now happening at Elland Road,

The Premier League final day promises to be as gripping as we have seen in years. The title and the final Champions League spot are still in play, with Liverpool