One of Pontus Jansson’s biggest attributes was his aerial prowess and it was no coincidence that in finding a way to make Leeds United adequately defend set pieces, Garry Monk tapped directly into that strength.

Concessions from dead balls hampered Monk in his early days at Leeds until he and his assistant, Pep Clotet, settled on a system in which Jansson patrolled the box as a free man at corners and other set-piece deliveries. Jansson was there to attack the ball, ignoring the bodies and the jostling around him.

That was 2016 and a period when Jansson often felt indispensable but times changed and, three years later, Marcelo Bielsa made the decision to sell him. Jansson’s exit in the summer of 2019 was dictated by more than tactics but it told a story about the type of squad Bielsa liked: mobile, slick, accomplished on the ball. The last thing Bielsa’s Leeds relied on was overwhelming dominance in the air.

When opposition sides began to hurt Bielsa from set-pieces, and from corners more than anything, Mateusz Klich joked that Leeds as a team were “small”. In explaining why the club were vulnerable in those moments, it was one place to start. Leeds were not awash with towering defenders and it was evident that more rudimentary players would have compromised the football Bielsa wanted to play. But set-pieces could be a thorn in his side; situations where Leeds depending on a certain style of marking amplified their aerial disadvantage.

Bielsa had a specific way of approaching defensive corners, lining up man to man inside the box and assigning his best header of the ball — Liam Cooper, in Bielsa’s estimation, when everyone was fit — the job of marking the opposition’s biggest threat in the air . Leeds persisted like that to the end of his tenure but the old set-up has been abandoned since Jesse Marsch replaced Bielsa as head coach in February. Latterly, the club had been under pressure from dead balls again, with goals conceded via headers directly from corners in three of Bielsa’s last four matches.

Two of those, one at home to Manchester United and the other away to Everton, were strikingly similar and indicative of the methods used by opposing sides to knock Leeds out of shape. Harry Maguire’s finish for Manchester United in a 4-2 defeat on February 20 was a textbook example of cracking the man-to-man structure and creating simple chances.

As the following images show, Leeds set themselves predominantly one-on-one with Luke Ayling, Diego Llorente and Stuart Dallas pinned close to Maguire, Paul Pogba and Cristiano Ronaldo. With the exception of a defender at the near post, every Leeds player has someone to mark. Llorente’s job was to babysit Maguire but the England international used the small crowd 14 yards out to stop Llorente sticking to him tightly. 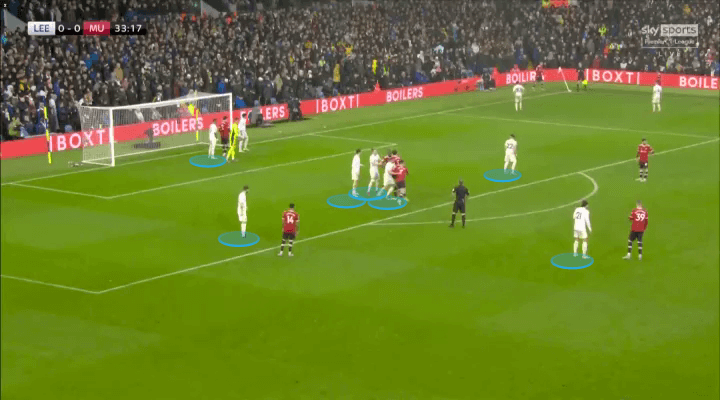 As the ball arrived, Manchester United disrupted Leeds’ shape with runs in different directions, including one beyond the near post, drawing two defenders out. The movement opened up space seven yards from goal where Maguire got the leap on Llorente and nodded an easy header in. Because of the distribution of players, no-one else was able to step in and do what Llorente was supposed to do. 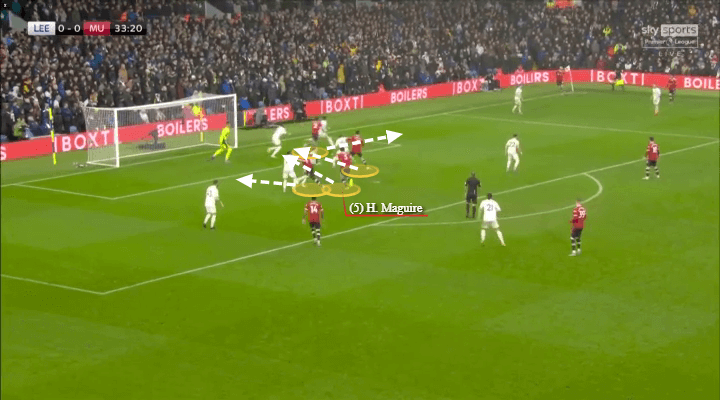 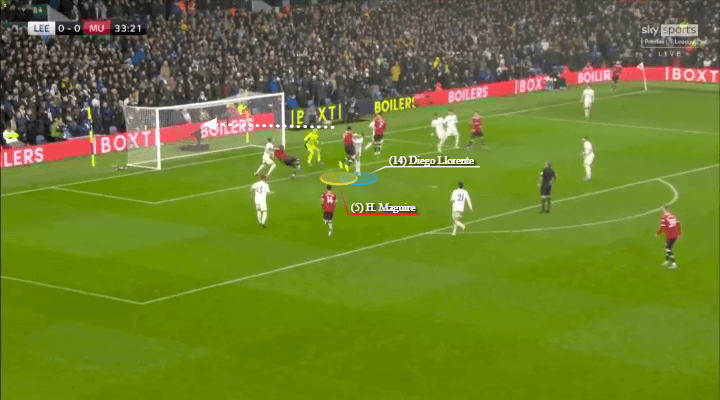 A week earlier, Everton’s second goal in a 3-0 win at Goodison Park used the same tactics. An attacking train on the edge of Leeds’ box sucked Bielsa’s markers together and when Everton burst forward from their standing positions, Leeds were unable to hold their ground or pin the advancing group down. Pascal Struijk lost a yard on Michael Keane and he, like Maguire, was presented with an easy close-range goal. Struijk, again, had no team-mate to bail him out. 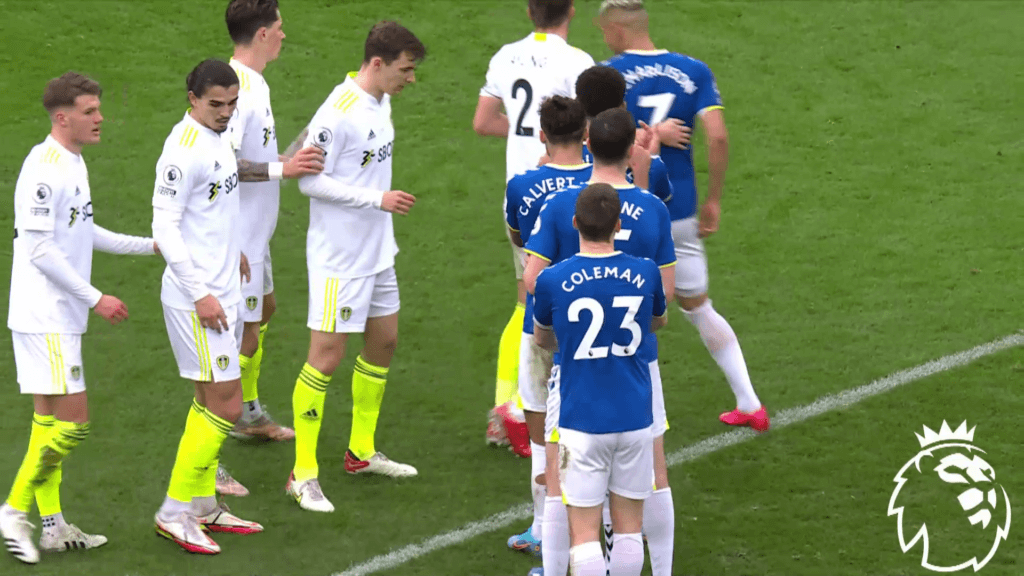 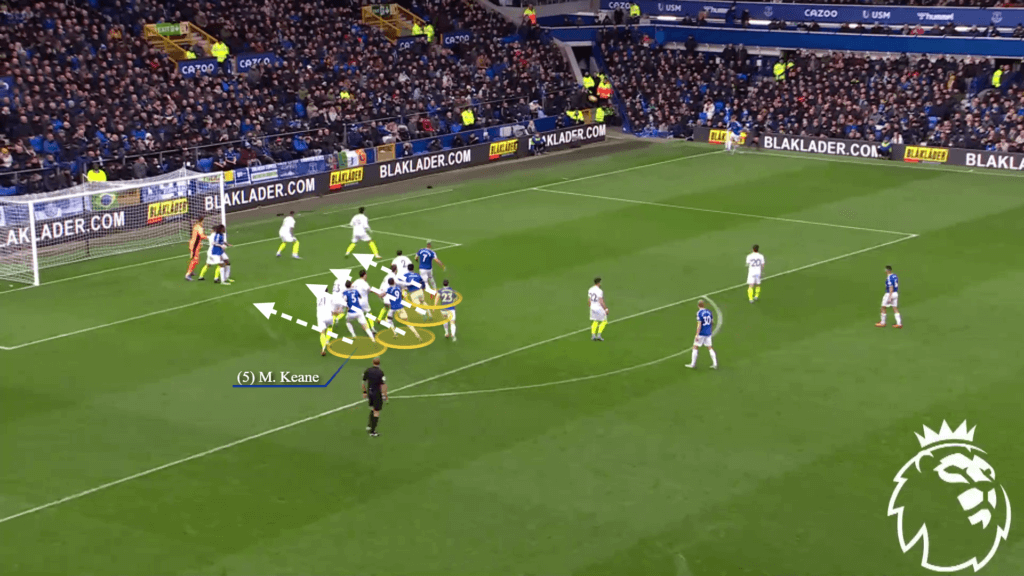 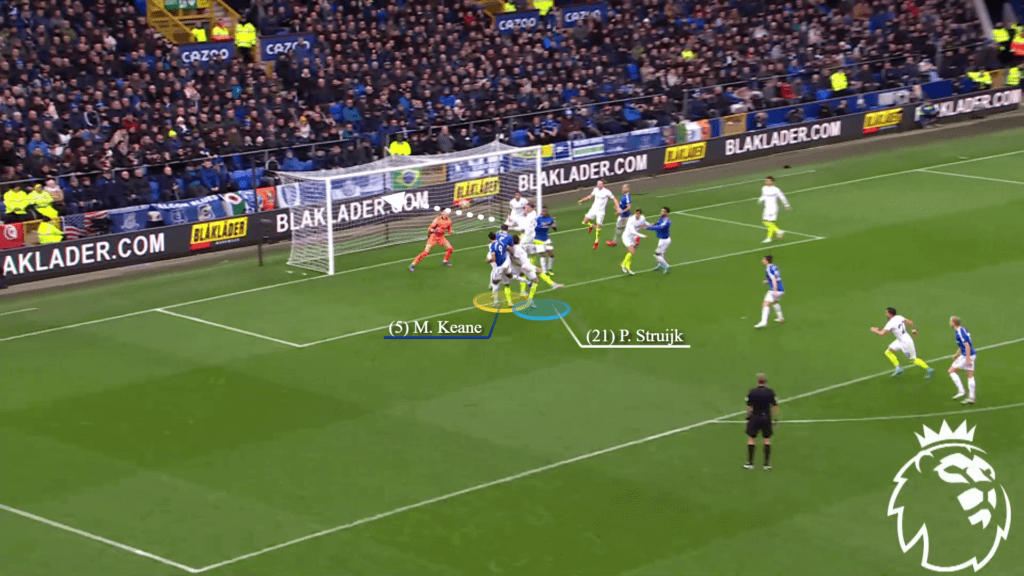 Defensively, Leeds are a club with considerable room for improvement, in open play as well as from set-pieces. Over the course of 32 fixtures this season they have averaged 2.13 concessions a game, the Premier League’s worst record.

Some heavy defeats, the worst of them a 7-0 rout at Manchester City, have compounded the data but the club’s clean sheet away at Watford two weeks ago was their first since the end of November. Marschs attempts to tighten up involved a switch to zonal and the use of two holding labels, as opposed to the single defensive one Bielsa stuck with, but his six matches in charge have shown specific changes in Leeds’ method of managing corners.

The next sequence of screenshots from Leeds’ 3-2 win away to Wolverhampton Wanderers last month neatly captures the switch in system. Leeds are still required to go man-to-man to some extent (see gray shaded area, image two) but behind the pocket of players vying with each other, Marsch has introduced a zonal line of four defenders, set up on the edge of the six yard box.

The blend of players there can vary — Raphinha and Rodrigo have featured in it — but Marsch’s center-backs are generally in the middle of the line. They are marking space rather than individuals and they are watching the ball rather than the movement in front of them. 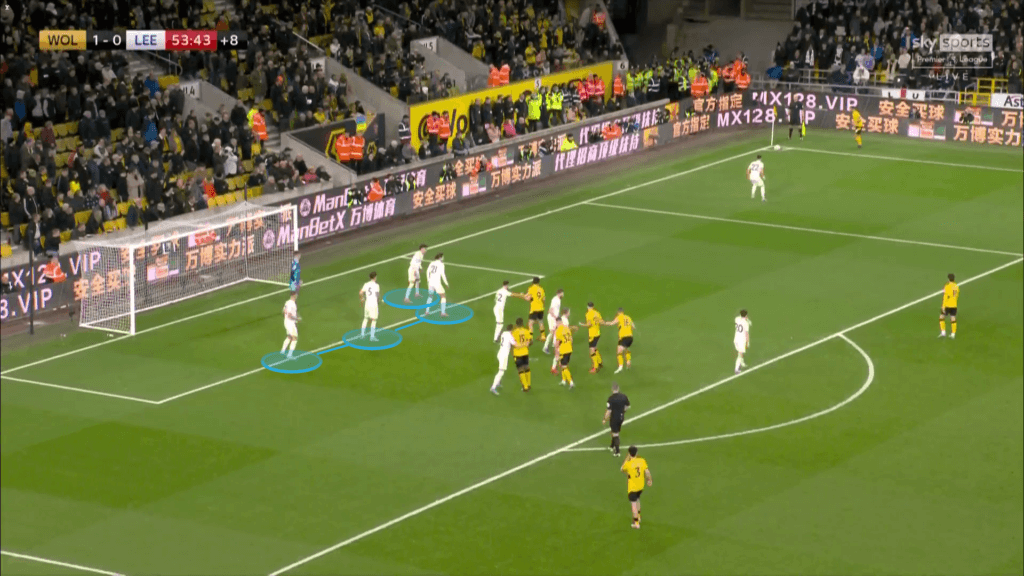 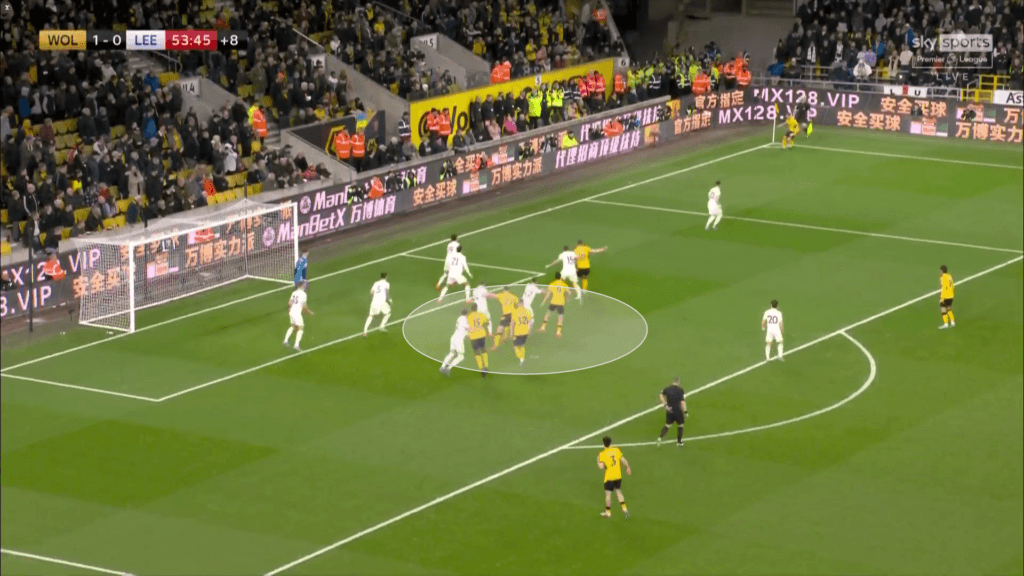 Wolves try to scatter as the corner drops in but Struijk, part of Marsch’s defensive line of four, tracks the flight of it and steps out to attack it with a clearing header before anyone else can reach the ball. In this instance, a simple approach is effective in quelling any danger. 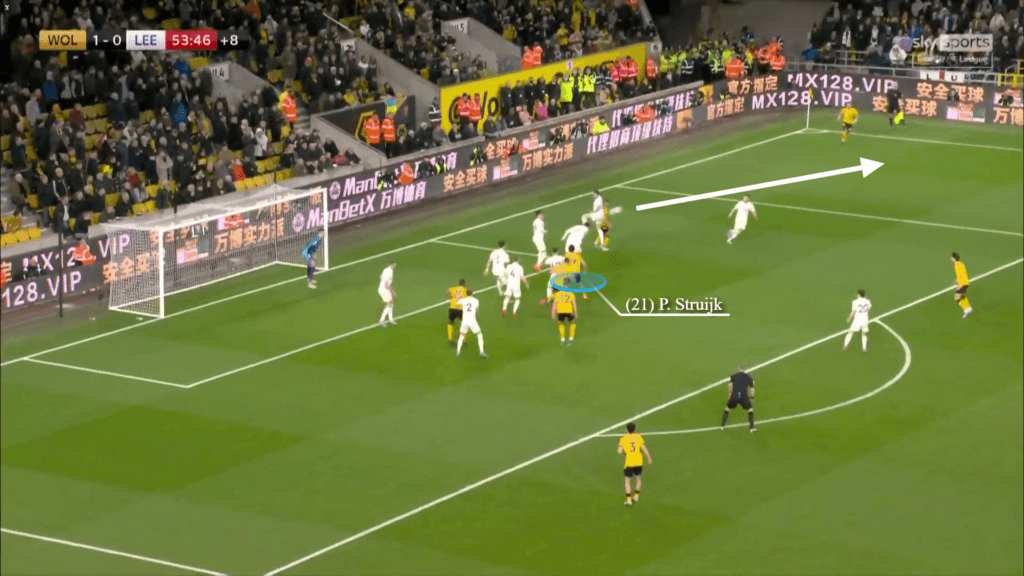 The zonal line was in place at Marsch’s first match away at Leicester City, indicating that it was one of the things he focused on during his first week of training at Thorp Arch. Leeds (next image) have five players in front of goalkeeper Illan Meslier here because Leicester have placed a body close to the goalline but the principle of occupying space and focusing on winning the first header is the same. 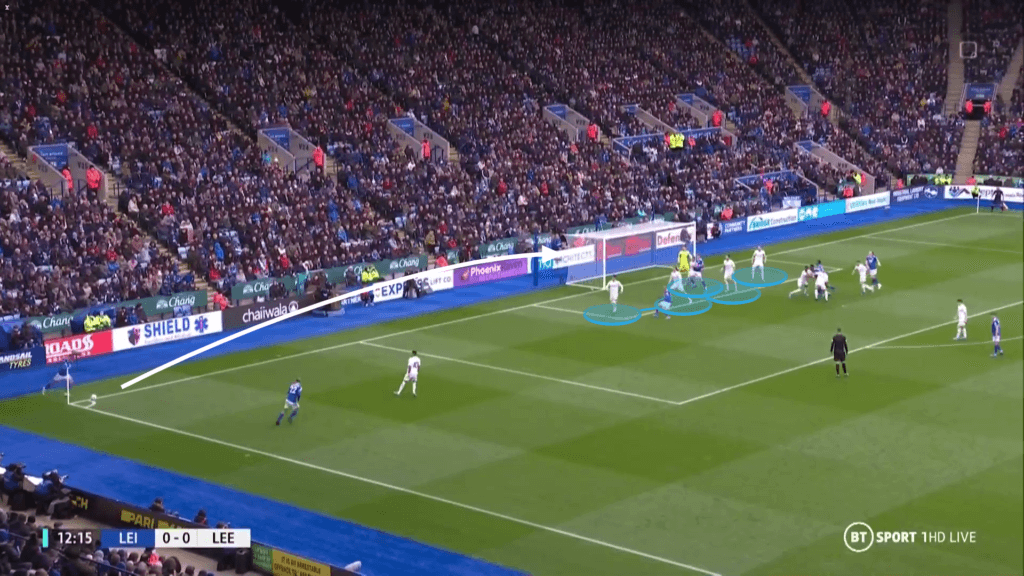 Leeds’ only concession directly from a set-piece under Marsch was via James Ward-Prowse’s free-kick for Southampton at Elland Road.

They have twice shipped goals in the second phase from free-kicks, away to Wolves and at home to Aston Villa, but their resistance to corners has been solid so far. Against Southampton (below), the positioning was there to see again: a line of Raphinha, Llorente, Cooper and Rodrigo ahead of Meslier with a crowd of players a few yards further forward.

Away at Crystal Palace tonight, Leeds are up against a side who have scored only six times from set-pieces all year. It is a contest in which Marsch will hope to see his dead-ball tactics hold firm. 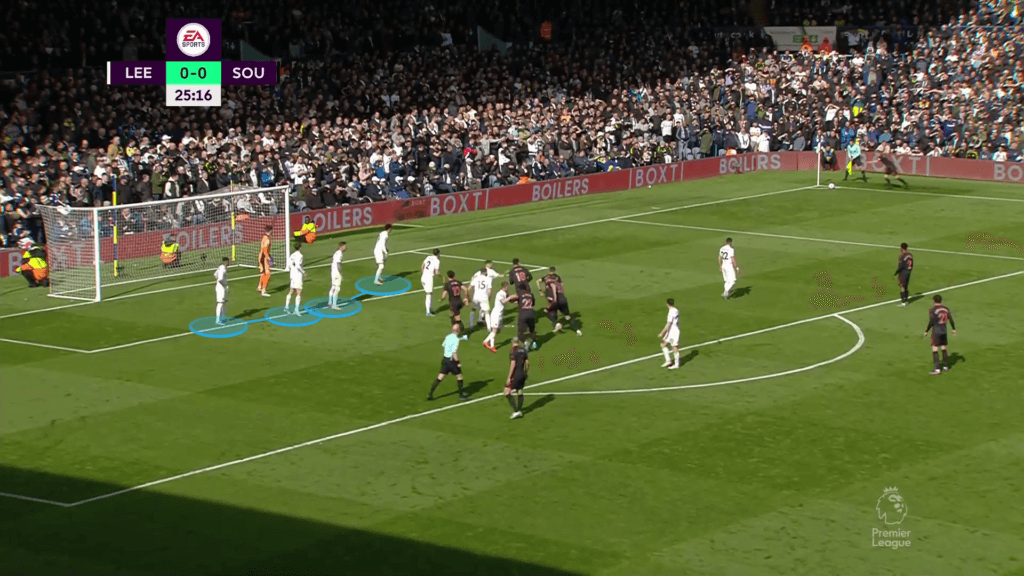 When it works, the system gives him what he got in this next example against Norwich City: a powerful header out from Llorente as Norwich tried to rush the six-yard area in injury time at Elland Road, a moment when the game was on the edge.

Marsch tried to be innovative with attacking set-pieces while he was coaching on the continent with RB Salzburg and RB Leipzig but in his short time with Leeds, repelling corners is where a different way of thinking has been most obvious. And to this point, it has worked. 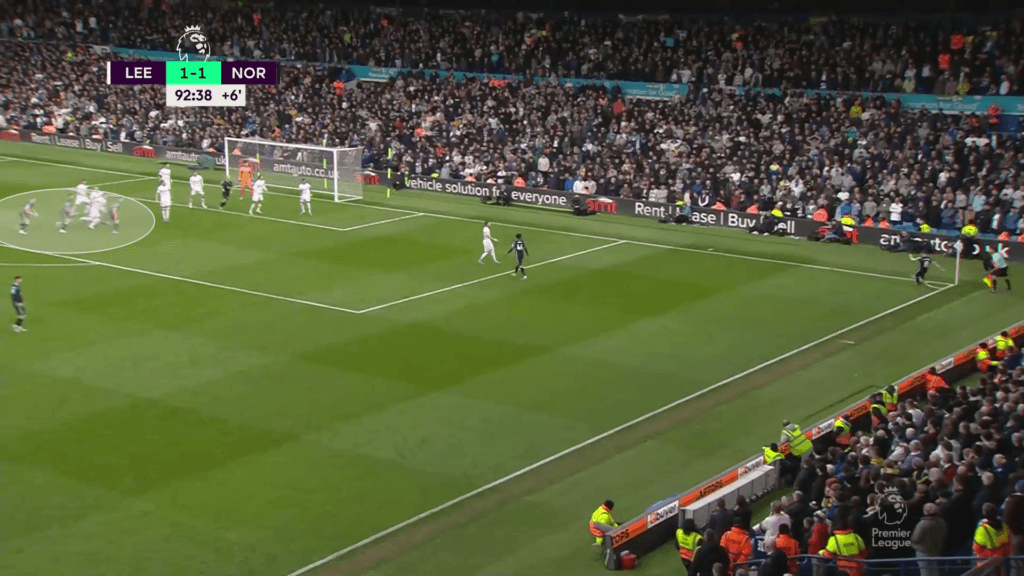 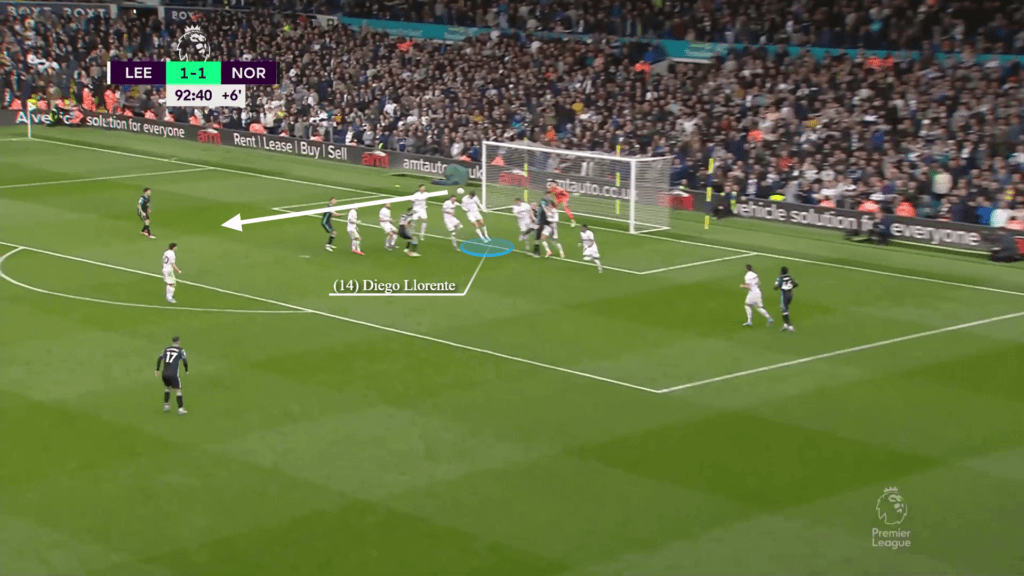 Bit by bit Leeds are changing as a team, in terms of tactics and structure. As time goes on, the shift from Bielsa’s way to Marsch’s will intensify and with the club on the verge of securing a third year in the Premier League, the freedom to make broader alterations will increase if and when Leeds get over the line. But in trying to steady the ship short term, addressing set-pieces was one way of making marginal gains.

Spanish Marc Roca is Leeds boss Jesse Marsch’s third signing of the summer after the Premier League side agree a £10.4m deal with Bayern Munich Marc Roca, 25, is Leeds