How each Premier League team pass

Pass networks are some of the most familiar data visualisations in football.

They’ll give you a quick glance at a team’s approach in possession: their average shape, the relative importance of different players, the hubs and spokes of the passing game. They show who passes to whom and how often. As nerd charts go, pass networks are easy to grasp — they look like an idealized version of what we see on the pitch.

Here’s an example of a pass network from last month’s Champions League final:

Let’s run through how to read them.

Each player’s dot shows the average starting location of their passes between the opening whistle and their team’s first substitution in the match concerned, when the viz cuts off. The bigger the dot, the more passes that player attempted.

Lines between players’ dots, as you’d imagine, show passes from one to another. There’s usually some minimum threshold to keep the network from getting too cluttered. In the viz above, players have to complete five passes per 90 minutes in one direction to earn a line. So, for example, there’s a link between David Alaba and Toni Kroos, who frequently dropped deep to link with Real Madrid’s center-backs, but not between Alaba and his left-back Ferland Mendy. Thicker lines mean more passes between the two players.

The gradient of a line indicates the direction of travel. For example, the line between Alaba and goalkeeper Thibaut Courtois gets brighter as it approaches the latter, meaning it shows back passes from the center-back. Sometimes, but not always, you’ll see a parallel line with the reverse gradient, indicating passes between the same two players going in the other direction.

Some pass networks use color to show some additional information beyond pass counts.

In our viz above, the red-yellow-green color scale shows possession value, or how much certain pass links or passers increased the team’s likelihood of scoring by moving the ball closer to the opponents’ goal.

Know your way around The Athletic‘s pass networks now?

Cool. So let’s try something a little more advanced.

Most of the time, a network shows one team’s shape in a single match (or part of one). But the way a team passes can change a lot from game to game, depending on the starting XI, the opponents, the score, the referee, the weather, whatever. You’d have to look at lots of pass networks to get a general idea of ​​how a team play.

Instead, sometimes it’s worth zooming out to combine lots of a team’s games into one pass network, like in this old viz by Cheuk Hei Ho:

A multi-game pass network smooths out the quirks of single matches and leaves us with a tidy thumbnail sketch of what can be hundreds or even thousands of passes.

One problem here is that it’s not easy to combine multiple games into one viz.

You can’t really do it by player, since line-ups change all the time. You can’t do it across different formations, since positions change, too.

So for a season-level look at the Premier League, we’ll follow Ho’s lead and show each team’s average pass network across all games in their most common starting formation. That allows for position matching even when individual players are rotated.

We’re left with a bird’s eye view of the many different ways Premier League clubs played the game last season. 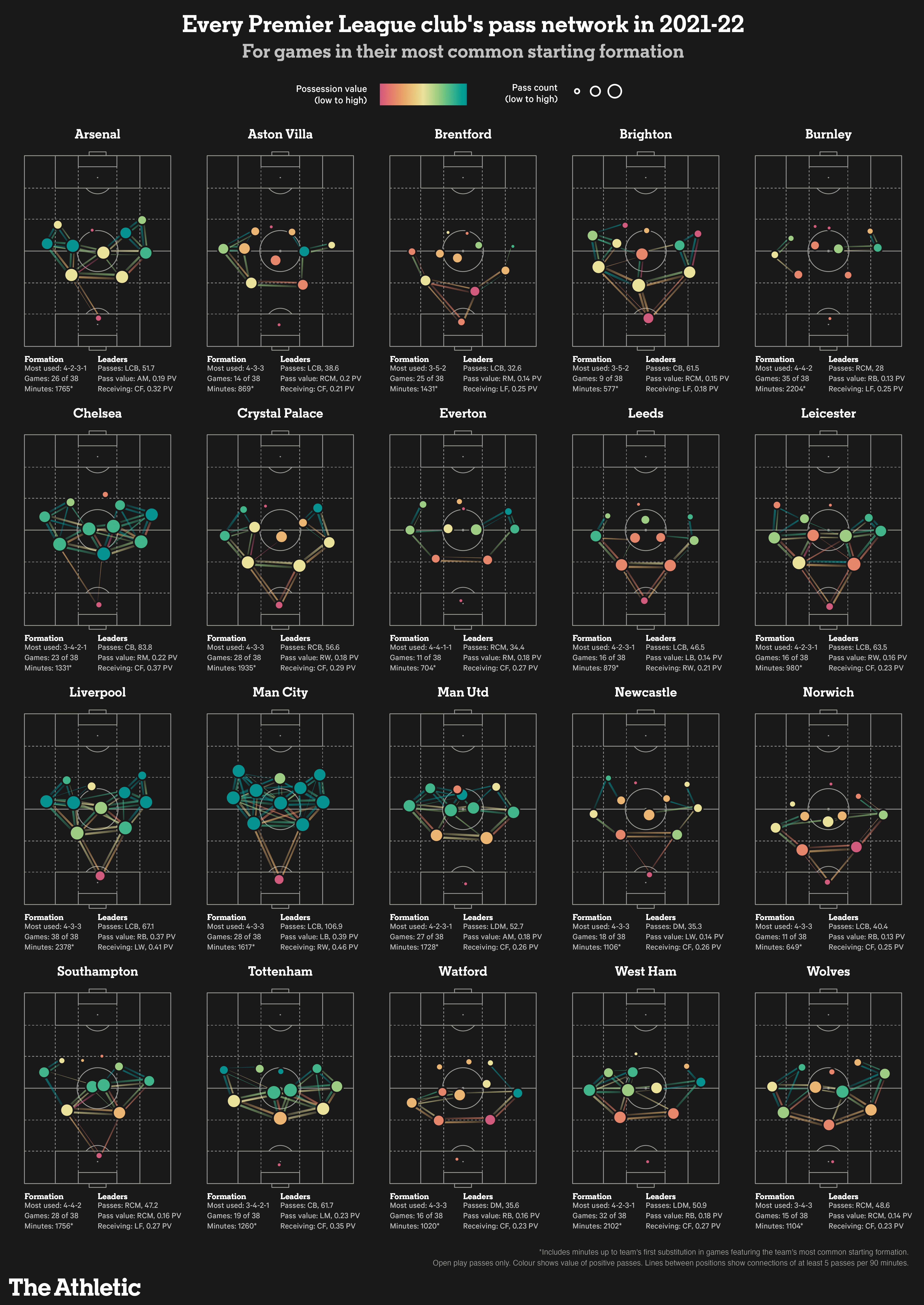 There’s a lot you could pull out of every team’s pass network, but here are some lead items.

Most connected pass network: Manchester City. Come on, was this even a question? Pep Guardiola’s back-to-back champions playing football like the point isn’t to put the ball in the net (although they’re decent at that) but to win the coveted Most Connected Pass Network Cup. Everyone passes to everyone. All the time. In total, 54 of a possible 110 pass pairs between the 11 positions in City’s standard 4-3-3 set-up averaged at least five completed passes per 90 minutes, the cut-off for a visible line on their very crowded pass network. Even past versions of City weren’t that social.

Least connected: Pour one out for Dyche-ball. Burnley completed their passes at a league-low 68.2 per cent, and only seven links in their trusty 4-4-2 met the five completed passes per 90 minutes threshold for a line on the pass network viz. All seven involved a full-back; only one included a. Dyche’s direct game kept Burnley stubbornly hanging on in the Premier League for seven years out of eight and the last six in a row, but prime Barcelona they were not.

Even though Burnley didn’t pass much, they were still more connected, in a sense, than Everton, who passed around the edges of their 4-4-1-1 but hardly anywhere else. Only 76 out of 110 position combinations in that formation averaged even one completed pass between them per 90 minutes, the lowest number in the league. The good news is that formation — a drastic simplification from previous seasons — was only used early in the last one, and even Rafa Benítez had given up on it in favor of a 5-4-1 before he was replaced by Frank Lampard in January .

Most symmetrical: There’s no real reason to prefer symmetry in a pass network, other than that it looks pretty. Still, it’s interesting that for all the different players and roles who cycled through Manchester City‘s fluid 4-3-3, the season averages came out pretty neatly balanced, even at the full-back spots.

Leads‘ occasional 4-2-3-1 might be the next-most symmetrical. As hectic as their man-oriented position could look off the ball, they consistently found their shape possession, pinching the defensive players in narrow to cover for wide center-backs, who shovled the ball to the full-backs and wingers creating most of the team’s passing value out wide.

Most compact: Ralf Rangnick may not have had much luck implementing his aggressive counter-pressing style at Manchester United, but his team at least got his message about the value of compactness, shrinking their pass network from fourth-longest connections in 2020-21 to the shortest last season. Rangnick trained his team to stay “in shape, tight and narrow” off the ball and to play forward quickly when they won it back.

Most spread out: Compactness is a matter of taste. There’s an old axiom in football that a team should shrink the playing area when they don’t have the ball and make it as big as possible when they do. Brendan Rodgers’ Leicester Did the second part when they played in a 4-2-3-1, keeping their full-backs and left winger wide and their line-stretching center-forward high up the pitch for a maximally expansive pass network.

Position with the highest share of a team’s passes: Defensive anchors in back-three shapes led this list, with Brighton‘s middle center-back (usually Lewis Dunk) and his Chelsea counterpart (usually Thiago Silva) tied at 16.3 per cent of their team’s completed passes. Including all passing attempts, the leader was Leicester‘s left center-back in a 4-2-3-1 (most often Caglar Soyuncu).

Those players may be too Important to their team: there’s research suggesting that more centralized pass networks, where some positions are more influential than others, are less successful.

Lowest share of passes: Centre-forwards don’t complete a lot of passes. Centre-forwards with the misfortune of playing for Norwich complete even fewer. Teemu Pukki led his relegation-bound team for the value of the passes he received but had nobody nearby to combine with playing in a bottom-heavy 4-3-3.

At the other end of the pitch, Manchester United‘s mobile, David de Gea, had the lowest share of his team’s passing attempts. One of the last pure shot-stoppers starting for a rich club, De Gea accounted for just three per cent of United’s passes in their usual 4-2-3-1, where his vanishing red dot looks like an accidental speck of dust behind an otherwise healthy pass network.

Highest share of pass value: No player was more important to his team’s ball progression than Aston Villa’s right central, John McGinn. His hyper-direct distribution accounted for 21.1 per cent of the team’s positive pass value as he repeatedly pushed the ball into areas where Villa were more likely to score. McGin’s 74. per cent pass completion rate, near the bottom of Premier League centrals, was a trade-off Villa were happy to accept.

Highest share of receiving value: Passing value isn’t just created by the player behind the ball — receivers matter too. After Pukki, whose 30.5 per cent share of Norwich’s receiving value led the league, the next two possession value leaders for passes received were Newcastle’s centre-forward in a 4-3-3 and Burnley’s left forward in a 4-4-2.

Notice what those have in common? They’re mostly the same guy: Chris Wood, who may have helped flip the Premier League relegation race when he took his talents to Tyneside in January.

Want more? Here’s the same thing for the Championship, which we’ll leave to you to pore over. 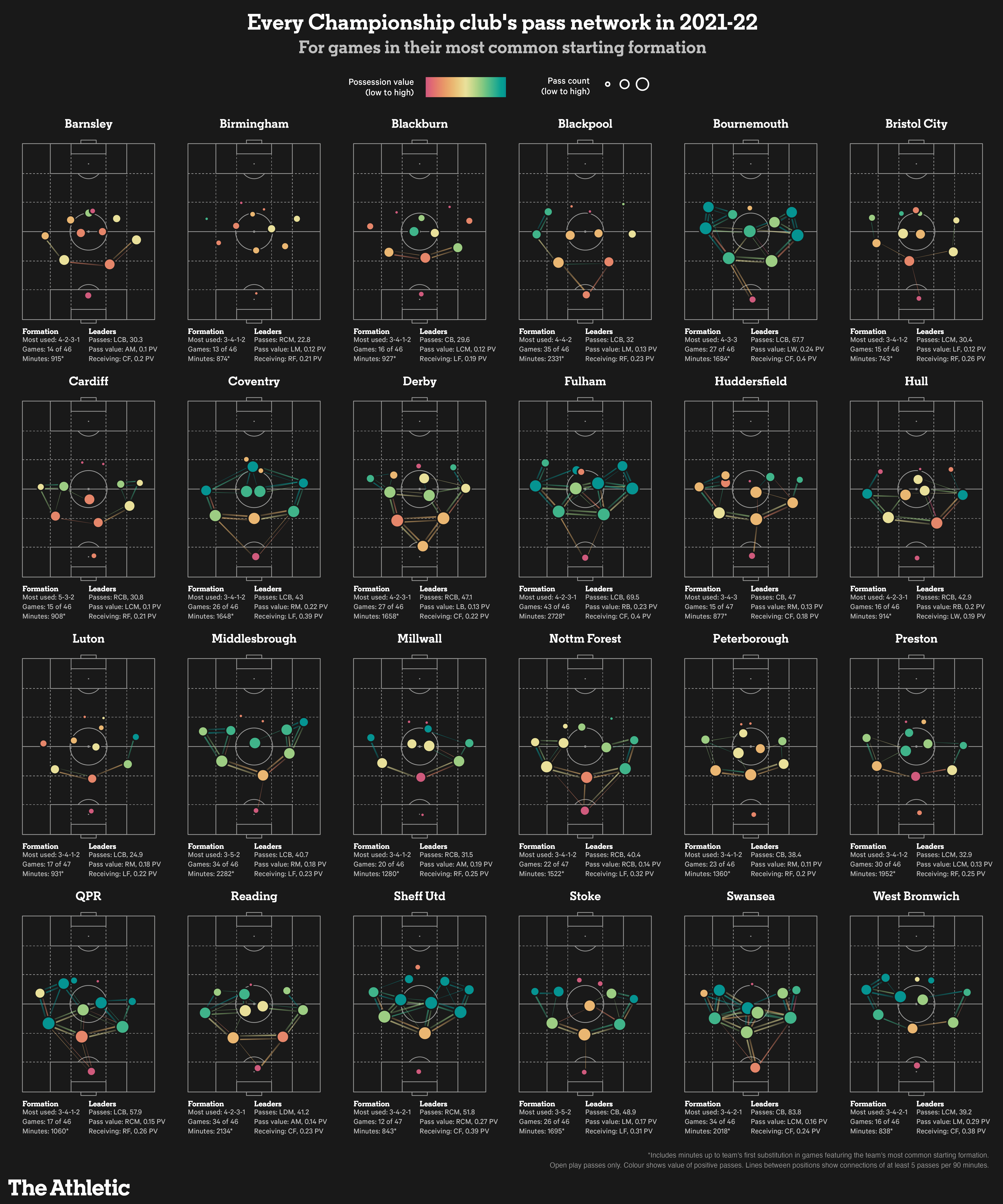