Data: The injury impact of Leeds overtraining this season

It ought to have been a sedate week in the land of Leeds United. The lull before the season’s final dash, beginning away to Crystal Palace on Monday week.

A comfortable 3-0 victory away to Watford on Saturday had even allowed the opportunity for supporters to start peering even further down the line towards a third season in the Premier League.

Life was starting to move on, tiptoeing away from February’s upheaval and the sacking of Marcelo Bielsa. The fifth stage of grief — acceptance — felt very close for most.

But then Jesse Marsch, the man picked to replace Bielsa, chose to come for the king and didn’t miss.

“The injury issue had a lot to do with the training methodologies,” Marsch told Talksport on Tuesday morning. “These players were overtrained. It led to them being physically, mentally, psychologically and emotionally in a difficult place to recover from week to week, from game to game. The stress levels were incredibly high.”

Former England striker Darren Bent, co-hosting that morning, raised his eyebrows on the studio webcam and drew breath. It was more than just a soundbite. It was criticism of a figure plenty believed would forever remain beyond reproach.

And Marsch went on. “From afar, you could see it in their faces,” he added. “You could see in the 15th minute that some of them were already at the max. That shouldn’t be the case.

“You have to have a fit team. The more your best players are able to perform at a high level, that’s how you create success. I’ve worked very carefully on how we train, how we play and how that all fits together.”

Marsch, until now, had chosen his words carefully when discussing all he had inherited at Elland Road. There was only respect and kind words for Bielsa; he wanted to “continue his legacy” by keeping Leeds up this season.

These comments felt different. They might not have been poisonous, but they were pointed. And, above all else, they addressed an uncomfortable truth.

Leeds have encountered long and troubling injuries this season, suffering as badly as any team in all of the Premier League.

Only Everton, another club that entered spring fretting about relegation, have racked up more injuries than Leeds’ 31 this season, according to figures collated by Ben Dinnery, an injury analyst at Premier Injuries. That is three times as many as Crystal Palace and twice as many as Wolverhampton Wanderers.

Leed’ total of 1,284 days missed due to injuries is unsurpassed this season, however, with 10.1 injuries occurring for every 1,000 minutes played by the team. Dinnery, perhaps most importantly, also estimates that 47 per cent of absences were soft-tissue or overuse injuries.

All the setbacks, to Patrick Bamford, Liam Cooper and Kalvin Phillips, have punctuated this season and hurt Leeds’ prospects of building on last season’s impressive final standing of ninth. The 2020-21 campaign, by contrast, had Leeds in the middle of the road for injuries, with only 705 minutes missed.

No complaints were to be found over Bielsa’s training methods then, of course. A weekly staple of Murderball was the making of newly promoted Leeds. Or so went the narrative. Intensity was everything.

Marsch, though, has not taken long to discover flaws. A squad purposely kept small by Bielsa found itself unable to do all that was being asked of it across large spells of this season. That created strains and exposed cracks when injuries were at their worst. 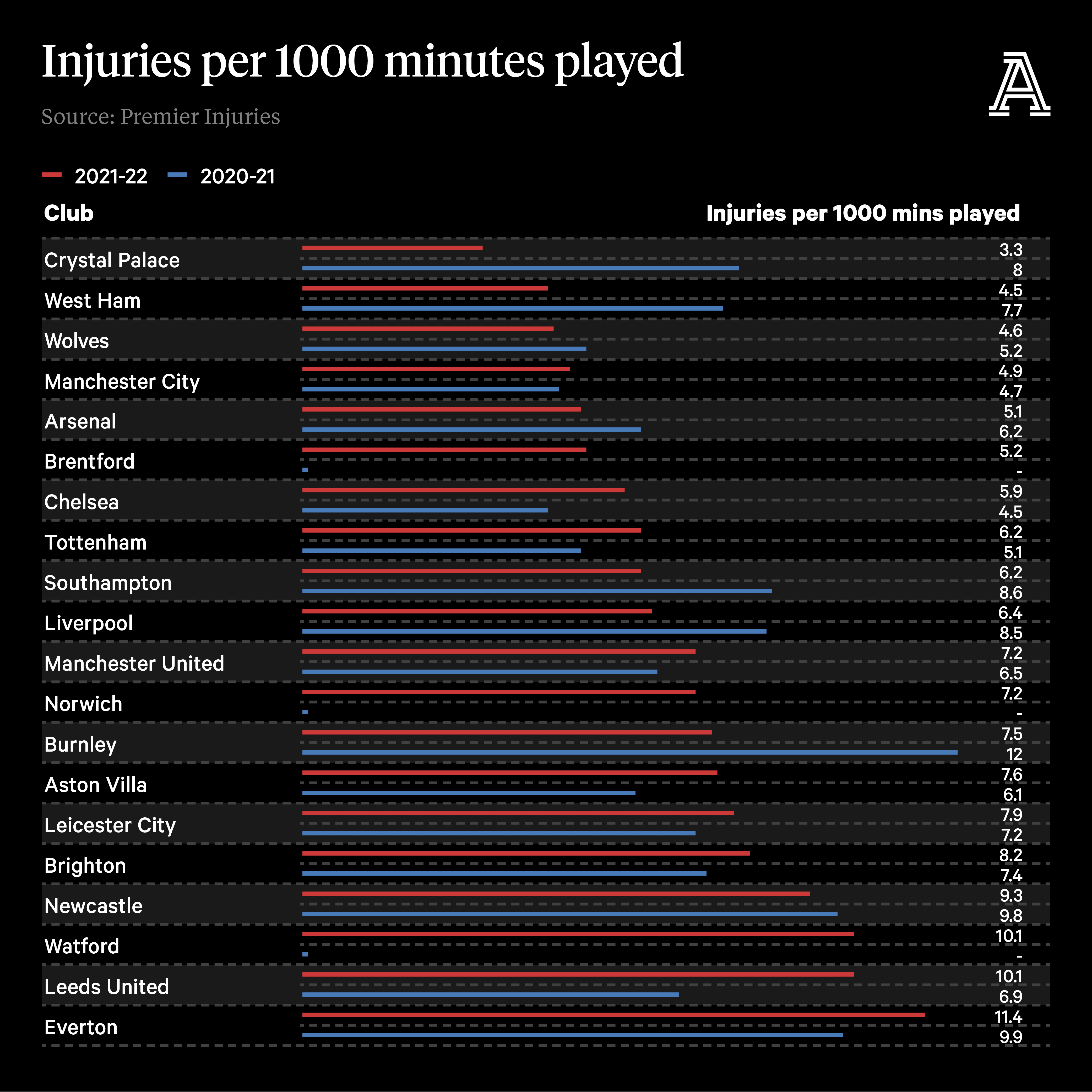 Leeds were moving in ever-decreasing circles in the magnificent final months of Bielsa’s reign. The greater the injuries, the less the quality available and the worse results became. Psychologically, too, that will always carry an unseen price. The burdens on Leeds shoulders were becoming abundant.

Any successor to Bielsa was always likely to release the pressures that were building. To replicate someone unique would have been foolish. A season’s injury patterns might have improved organically but Marsch saw merit in rest. Carrot, he deduced, tastes better than stick.

Marsch accepted his own responsibility in hurrying back Bamford for the 3-2 win away to Wolves last month but, through good fortune or design, he has also been able to welcome back some of the cavalry. Cooper has returned purposefully as captain, as well as Phillips, who so far has been used sparingly with two substitute appearances. Diego Llorente is another back in the fold, starting each of this current four-game unbeaten run.

Headaches in the treatment room are undeniably easing.

The subplot to all this, of course, is the discomfort felt in criticisms levelled indirectly at Bielsa.

This still feels like the aftermath of a divorce and some of the children remain deeply dissatisfied at how it came to this. To have a newcomer to the family bad mouth the one you miss — or at least, his once endearing methods — jars. Take his name out of your mouth, etc.

Bielsa demanded everything from his players for close to four years at Elland Road and together they enjoyed an adventure for the ages. The setbacks, like a play-off defeat to Derby County in 2019, only added depth to the story.

Marsch cannot possibly hope to create the same ride without winning major silverware but that does not invalidate his opinion that Leeds were feeling the strain under Bielsa’s training methods. Nor does it make Marsch incorrect.

Leeds owner Andrea Radrizzani felt something had to change after those four heavy defeats in February. So, too, did Marsch, who has loosened the strings in hope of finding a better tune.

On Merseyside they might argue with Jesse Marsch’s description of Manchester City as the best team in the world, but any dispute over their status is only splitting hairs. One