Calvin Ramsay: the right-back wanted by Liverpool and Leeds

There are, for very different reasons, a big couple of weeks ahead of Liverpool and Leeds United, as one pursues a unique quadruple and the other fights to preserve Premier League status only restored two seasons ago after 16 years in the EFL wilderness.

It also promises to be a defining time for a player both clubs covet: Calvin Ramsay, an 18-year-old right-back currently playing for Aberdeen in the Scottish Premiership whose attacking qualities one informed observer believes could earn him “big money” in England.

It has been a rapid rise for a teenager who has great potential and plenty of room for improvement. It was only 12 months ago, in the 89th minute on the final day of the last Premiership season, that Ramsay came off the bench for Aberdeen at Ibrox.

It was just his fourth appearance at first-team level after a debut against Dundee United two months earlier. Aberdeen were on the receiving end of a 4-0 hiding that day as Rangers celebrated their long-awaited 55th Scottish league title, which denied arch-rivals Celtic a 10th championship in a row.

What Ramsay experienced that day in Glasgow, and throughout a season in the first team’s bubble, inspired him.

So much so that when the rest of the senior squad headed home to enjoy their summer, he stayed behind. Aberdeen Under-18s’ season still had two games left, and Ramsay wanted to be part of it.

Having got his feet wet in first-team football with those five appearances off the bench last spring, Ramsay has played 33 times for Aberdeen — the hometown side he joined after being scouted playing for local side Cove Boys Club at the age of eight — this season across all competitions. He made 29 starts, including in Europa Conference League qualifiers last summer where he contributed four assists in six games.

His performances have led to a flurry of teams wanting to sign the teenager and to him being named Scottish Football Writers’ young player of the year last month.

Liverpool are pushing Manchester City for the title and could add the FA Cup and Champions League trophy to the Carabao Cup they won in February over the next two weeks whereas Leeds are struggling to avoid relegation. But the Yorkshire club may be able to offer Ramsay a quicker route to senior minutes, given their first-choice right-back, Luke Ayling, turns 31 in August.

If he joins Liverpool, it would be more difficult for Ramsay to displace Trent Alexander-Arnold, a full England international and unquestioned Premier League star who is only 23 himself. Even given the limited joy Neco Williams has had when given his chances by Jurgen Klopp in recent seasons it is likely the 21-year-old Wales international will, after his successful second half of this season helping Fulham win the Championship title out on loan, look to move on in search of more consistent playing time.

Conor Bradley is another, like Williams, who knows the difficulty of trying to break into the first Liverpool team and the 18-year-old has had to settle for under-23s football for the Merseyside club this term. Especially as Joe Gomez, now considered Klopp’s fourth choice centre-half, has emerged as back-up to Alexander-Arnold in recent months.

In Liverpool’s favorite is that Ramsay will know being around Alexander-Arnold and getting the level of coaching available at their Kirkby HQ, headed up by Klopp, can bring his game on even more.

Klopp is understood to have approved the pursuit of Ramsay very quickly when the idea was presented to him. It is also feasible to think Russ Richardson will have played a part in flagging the youngster up to Liverpool’s scouting and recruitment department, having been head of recruitment at Aberdeen for eight years before joining the Anfield scouting team last July.

Norwich City, heading back to the English Championship for 2022-23 after another Premier League relegation, and Sassuolo, of the Italian top flight, are thought to be two more interested parties.

In the coming weeks, Ramsay will have to decide what is the best move for him.

And it is a lot to deal with for someone who only turns 19 in July.

Another Serie A side, Bologna, had an offer for Ramsay rejected by Aberdeen in January as they looked to double up on Scottish full-backs having signed left-back Aaron Hickey from Edinburgh-based Premiership side Hearts in September 2020. Watford, now condemned to return to the English second tier with Norwich, are another club who are thought to have made an unsuccessful attempt at accquiring him during that window.

Seeing his name trending on social media, written in headlines and being mentioned on the affected news Ramsay, and his form for Aberdeen dipped as a result. But it wasn’t long before it picked up again and he was back to bursting forward from right-back and scoring his first, and so far only, senior goal against Dundee on April 2.

So what is it that makes Ramsay a player Liverpool and Leeds both want and plenty more clubs admire? Here we analyse what he has shown in his fledgling career so far.

The one quality that stands out when watching Ramsay immediately play is that he is strong on both feet.

He can hit the ball as well with his left foot as with his favored right — a rare gift and one that makes him an attractive proposition for teams looking for a player with the versatility to play on both flanks.

His first goal as a professional was a strike from 20 yards in a 2-2 draw with Dundee last month and it is the perfect example of Ramsay being able to use both feet.

The teenager looks unbounded in attack. He is creative and imaginative when moving forward, and he’s proactive too.

Ramsay is comfortable getting on the ball and making things happen in the opposition half. His composure in these situations is said to have stemmed from having played as a player throughout his youth and during his days at the Scottish FA’s performance school, Hazlehead Academy in Aberdeen.

He is also adept at two more aspects of the game that are key to Klopp’s preferred style: his ability to cross the ball from open play and to deliver well from set pieces. 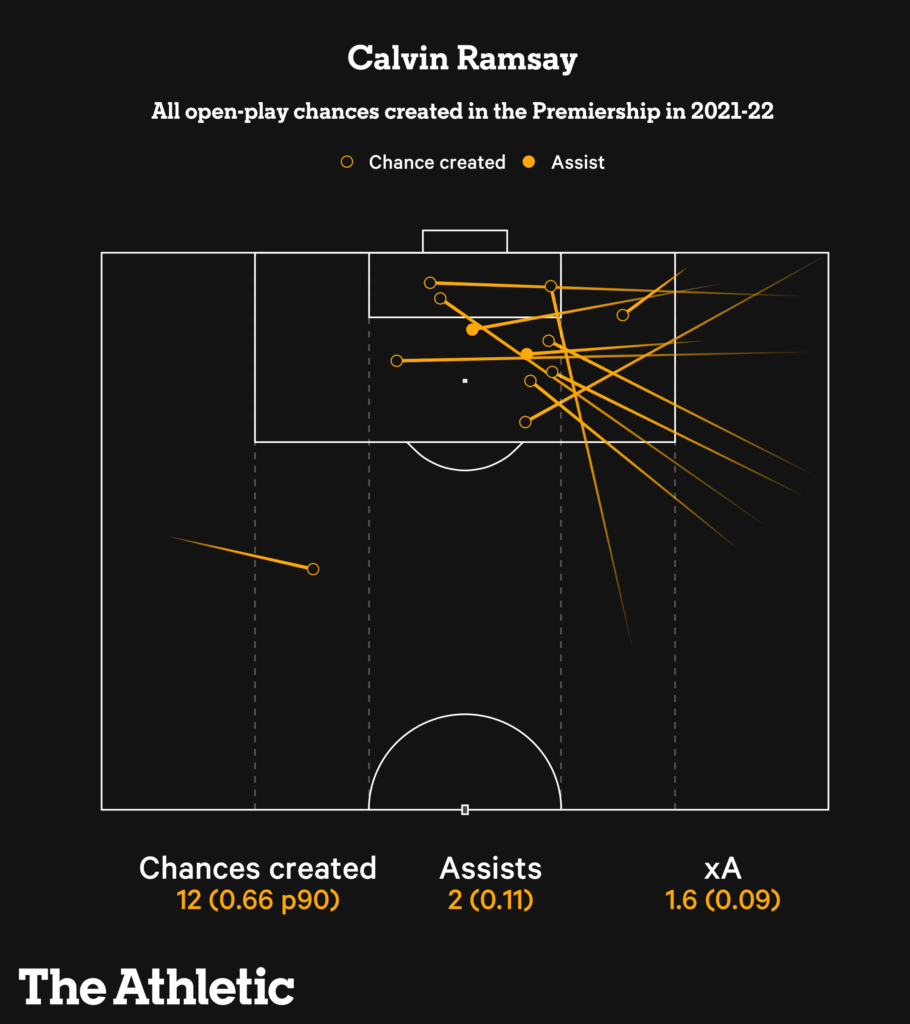 Ramsay demonstrated his composure from the wing when assisting on the Christian Ramirez goal that was the difference as Aberdeen beat visitors Hibernian 1-0 in October.

Picking up the ball on the right, he drives at his defender before spotting the space Ramirez has found. 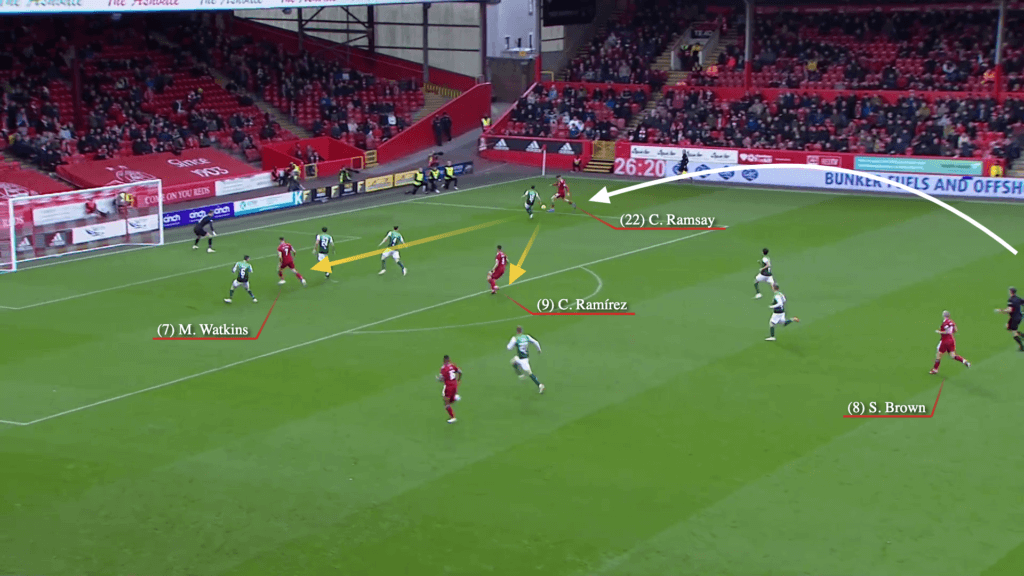 He then plays a cross to his team-mate, who slams a shot past Matt Macey. 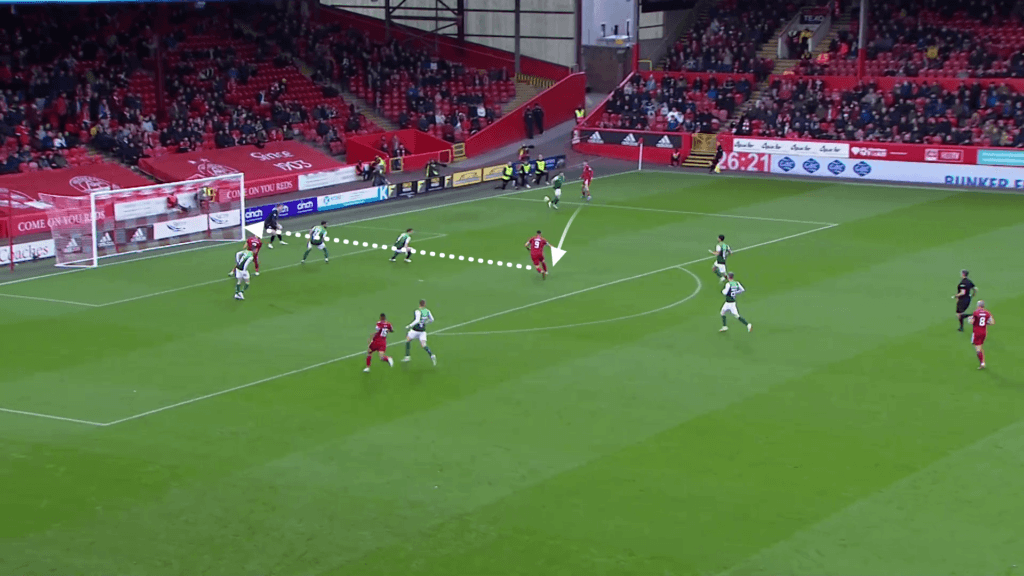 Ramsay’s technique when taking a set piece is interesting. He gives off an Alexander-Arnold kind of energy as he swipes his foot at the ball, almost lifting it into the opponents’ box rather than blasting it. 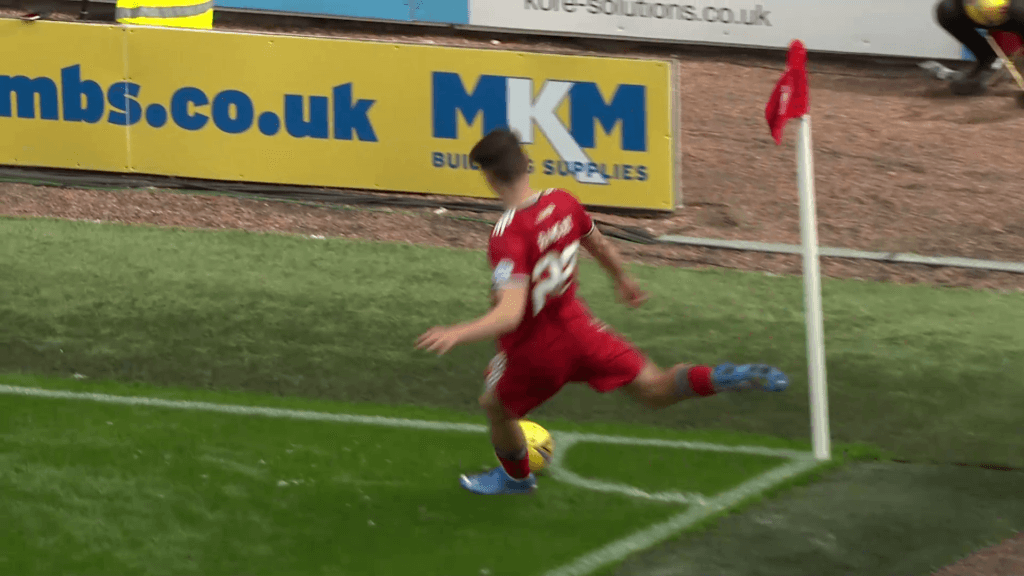 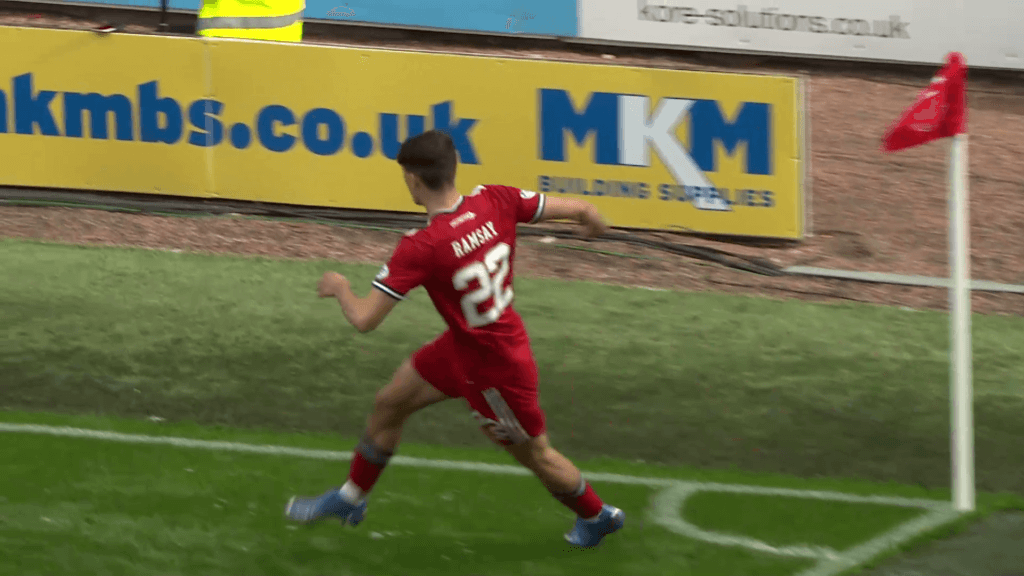 He has had joy with this technique, including against Celtic, also in October.

It was his corner that set up the Lewis Ferguson header in the 56th minute which levelled the scores at 1-1. 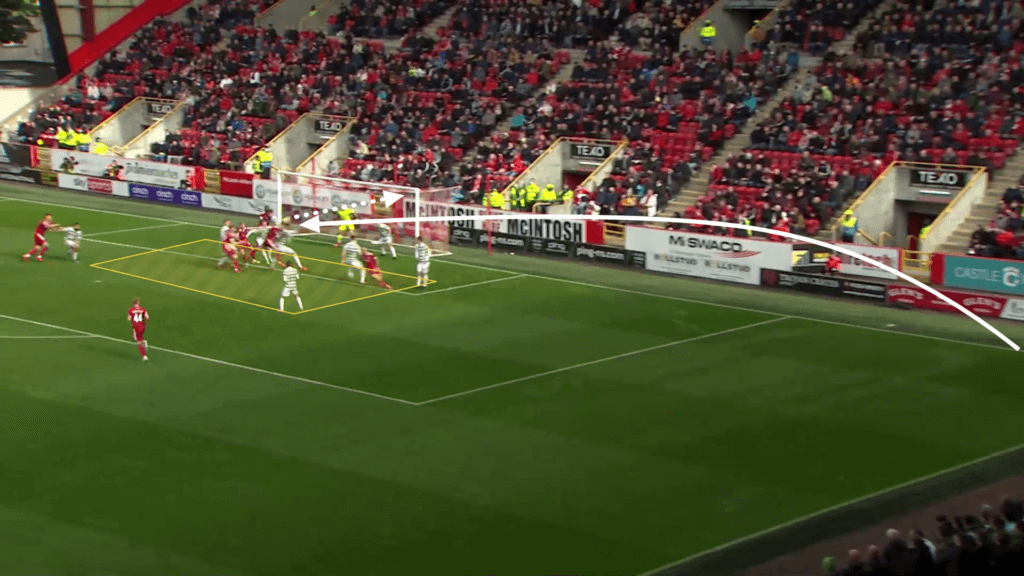 Ramsay also gave a solid account of himself defensively in that game against title-bound Celtic, however a lapse in concentration in the 84th minute proved costly for him and Aberdeen.

The teenager was marking Filipe Jota on the edge of the box and, as the Portuguese forward made a run in behind, took a second too long to switch on… 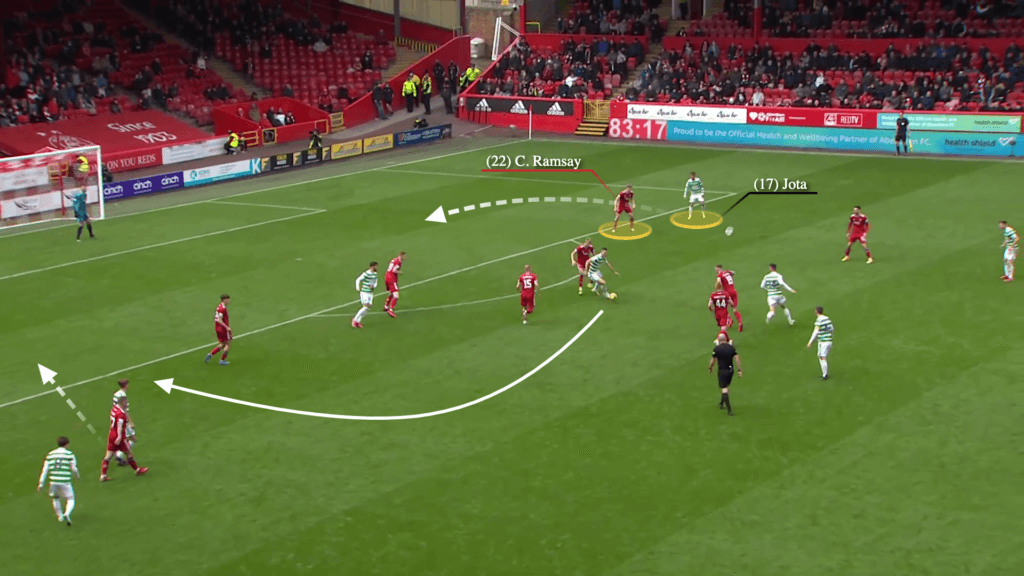 …in that time, Jota had stolen the march on him and Ramsay was unable to catch up. This left the Celtic man in enough space to convert for the winner when the cross from Adam Montgomery arrived at his feet. 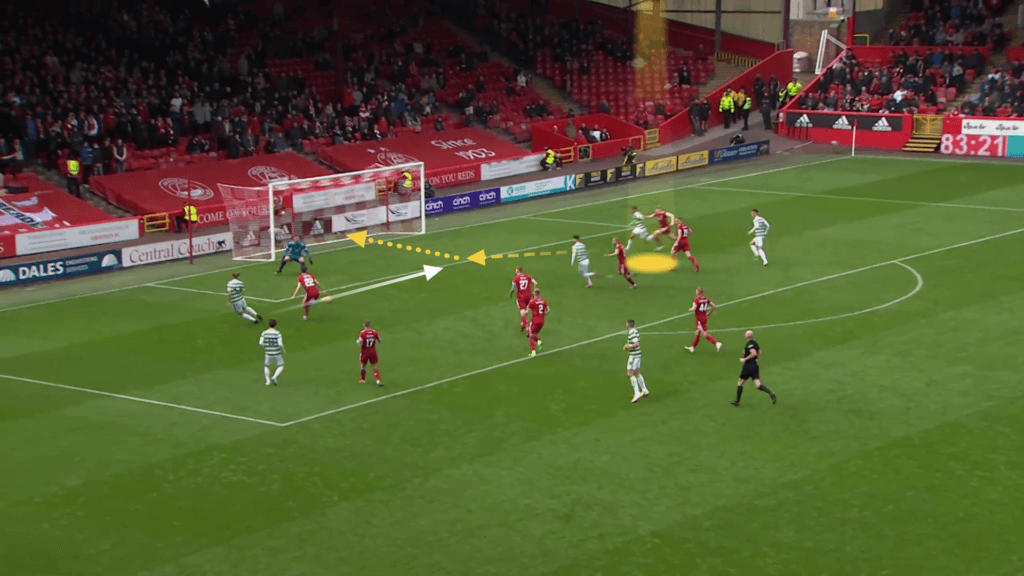 It is defensively where the main questions lie regarding Ramsay.

He is not as proactive in those situations as he is in attacking ones. At times he appears to struggle to maintain his focus and he sometimes lacks the required aggression when jockeying opposition players or challenging for the ball.

As highlighted by the smarterscout powered pizza chart below, Ramsay has less of a tendency to disrupt opposition attacks by making a high volume of defensive actions, such as tackles, blocks or clearances (28 out of 99) or indeed challenge for the ball in the air (aerial duels volume rating: three out of 99). And his rating for ball recoveries and interceptions (six out of 99) has been below par in an Aberdeen side who found themselves having to fight off a relegation scare. 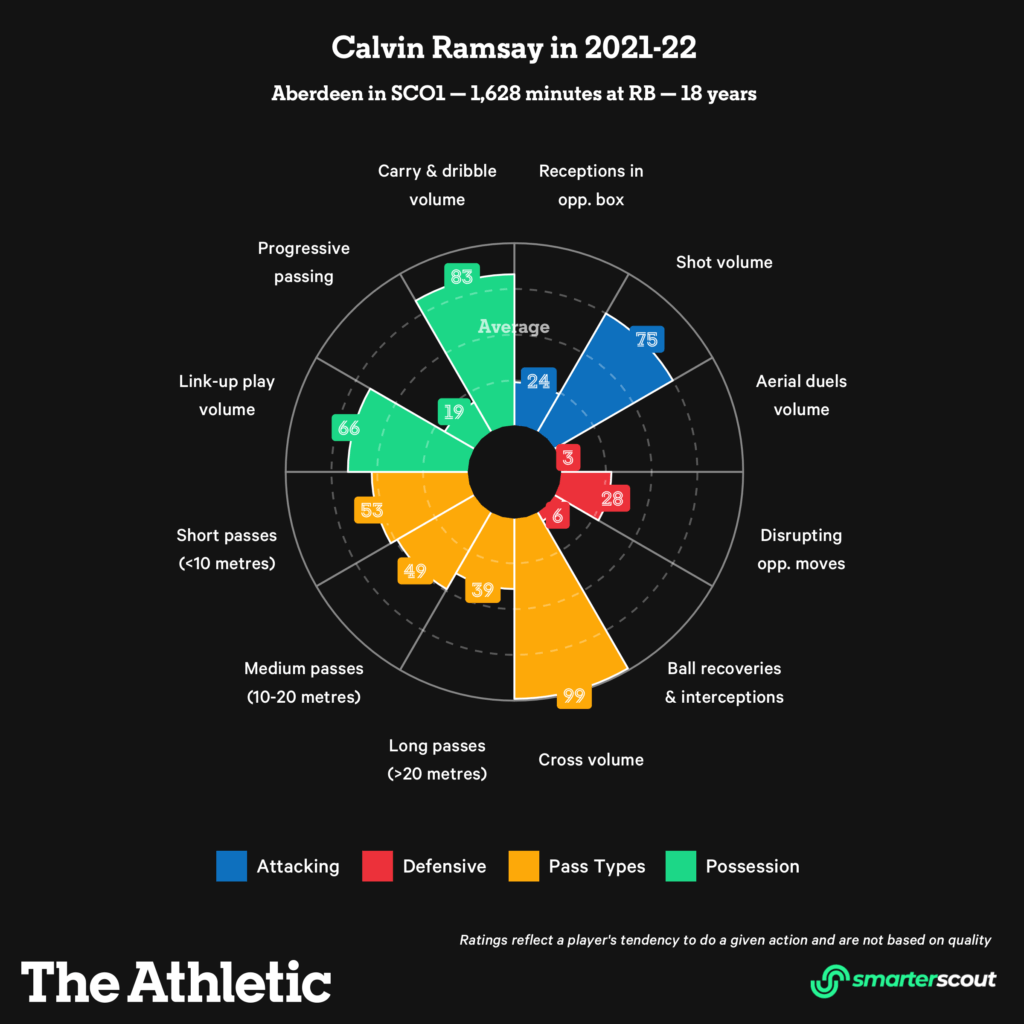 One example of how this can manifest itself on the pitch came in a game against Motherwell.

Ramsay initially shows his opponent down the line… 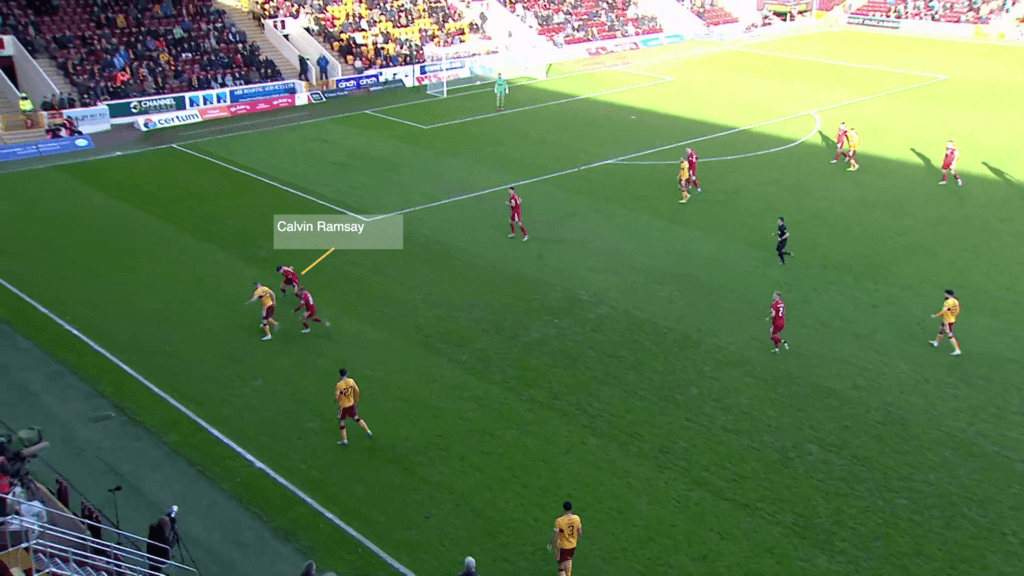 … and then does well to win the ball… 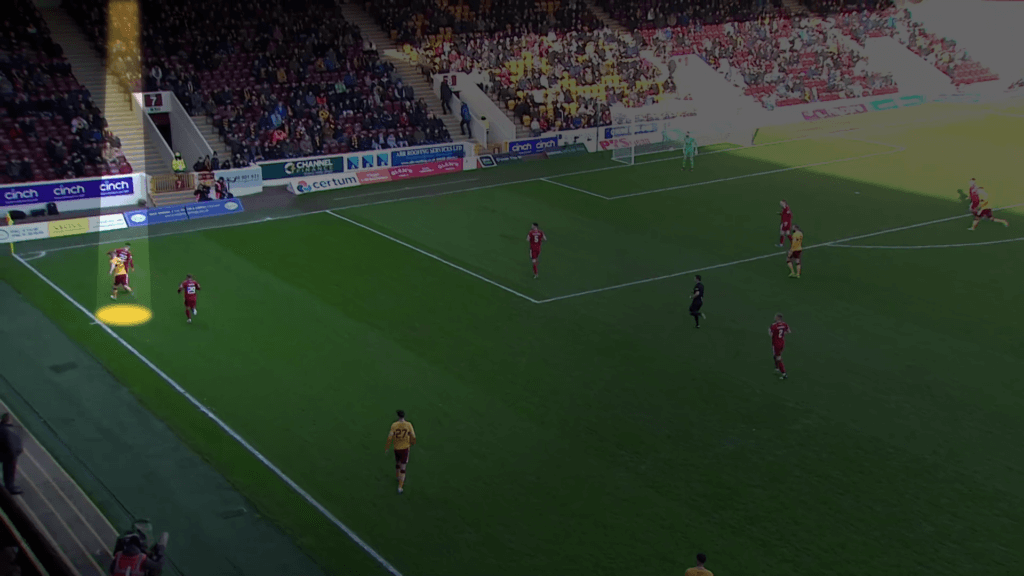 … only to be outmuscled, conceding possession and eventually giving away a foul in trying to regain it. 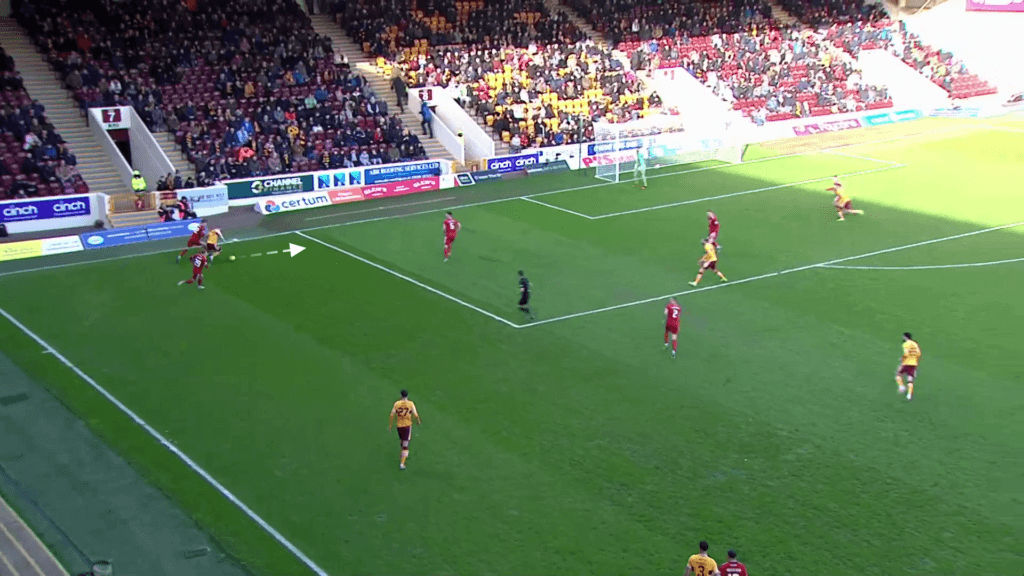 This is the side of his game that he needs to do the most work on whichever club he moves to.

These lapses in concentration are something those who have worked with him feel he will improve on the future. One main caveat to remember is that Ramsay is young enough and determined enough to do better in these areas.

“The attacking side of his game is better than the defensive side and a lot of the focus and attention on him has been paid to the attacking side,” one coach who worked closely with Ramsay told The Athletic. “That’s what will probably earn him the big money if he moves to England.

“Defensively it seems to be about focus as much as anything and you have to remember he’s still young. It’s not an ability thing.

“He’ll get better defensively, because he’s got the talent and physically — you’ll see him pack on muscle too. He’s got a broad physique and he’s quick too and he’ll use all that more and more as he develops. He’s already shown that he’s able to knock the games out, so, physically, that’s not a problem.”

The only question that remains is where this next phase of Ramsay’s development will take place.

Here they are, then: in the red zone as red cards come from all angles. Leeds United hoped to be coasting by now, to have at least one game at