Bielsa and the newspaper advert that went around the world

In the 48 hours after Marcelo Bielsa’s sacking, the 66-year-old was hit by a wave of emotion. There were tears and there were hugs with the crowds who turned out to see him leave Leeds United’s training ground for the last time. It was all they could do to stop him from vanishing without a goodbye.

When he finally flew out of England, Bielsa went quietly and later than intended, his booking delayed by COVID-19 regulations in his native South America. He and his wife Laura arranged a short holiday in Brazil, a break for him after three and a half incomparable years at Leeds. After that, it was back to his home in Maximo Paz, south of Rosario in northern Argentina, to think about what comes next.

For Bielsa, there are certain to be job offers in the weeks ahead and reports in his part of the world say Colombia want him as their next head coach after sacking Reinaldo Rueda, their incumbent for the past 12 months, on Monday. In the meantime, he is likely to keep his counsel and keep his distance from the public eye. So far, fitness coach Benoit Delaval is the only member of Bielsa’s staff at Leeds to speak about his dismissal publicly.

In Yorkshire, it was hard not to wonder when or if anyone would hear from Bielsa.

Luke Ayling, one of the players who thrived most under him, spoke for many people when he said that “the saddest part (about Bielsa leaving) is not knowing if we’ll see him again.” Which posed questions for the fans he also left behind: How best to thank him for giving Leeds the time of their lives? How to reach a man who was happy to slip into the background and shut himself off?

A month ago, a group of supporters looked into the possibility of publishing a message to Bielsa in a newspaper in Argentina, with the aim of catching his eye and saying their piece. The group were not looking for individual publicity and when it came to drawing up the advert itself, they did not want their names put to it. They would chip in to meet the cost and let the message speak for itself, hoping that news of it would reach him.

Last weekend, it ran in La Capital, Rosario’s biggest daily paper and a publication as close to home as any for Bielsa.

At a cost of just under £350, the group took out a full-page advert in Saturday’s edition with a tribute that made waves across Argentina and beyond. Saturday was a good moment to publish: cheaper than Sunday, the most expensive day to print a newspaper advert, and the morning after an Argentinian league game between Newell’s Old Boys and Patronato in Rosario.

“Saturday’s the day when people pick up the paper for the sports news,” says Jamie Ralph, a long-time Newell’s fan who runs a Twitter account devoted to the club and helped organize the advert in La Capital. “Newell’s playing at home the night before meant a lot of fans would buy it on the Saturday and see the message alongside the match report.

“We’d been talking to the Leeds fans about it for three or four weeks beforehand and it seemed like the best time.”

Through a mutual appreciation of Bielsa, Ralph and his friend Nicolas Bloj had become conduits for Leeds supporters who developed an interest in Newell’s and made trips to Rosario to watch them play. The connection between Newell’s and Leeds has grown to the extent that, according to Ralph, at least one Leeds fan has been seen at each of Newell’s league fixtures this season. Bloj made contact with La Capital to start the conversation about securing advertising space and agreeing a price.

“The repercussions have been huge,” Bloj says. “When I say huge, I mean (the advert) has been spoken about by all the main newspapers, sports programs and radio shows in Argentina.”

La Capital printed an adjoining article explaining the message and the process behind publishing it. Feedback from the paper said no other online piece in its history has gone viral in the same way. FIFA’s official Twitter account was one of many that replied to a tweet about it on Saturday morning.

The message to Bielsa was understated and a little cryptic, predominantly in Spanish but published under the English headline ‘Thank You Marcelo’. There was no mention at all of Leeds United by name. The text of the ad did not include Bielsa’s surname either. But to him, and anyone in the know, the references were obvious:

‘We stood in the August 2018 sun mesmerized by football we didn’t know was possible.

‘And we felt something again.

‘You reminded us that football can be beautiful and that a team can be greater than the sum of its parts. Side before self.

‘And you gave us so much more than football. You took us through a pandemic and brought us together while we were all apart.

‘You showed us that integrity and decency matter, in good times and bad.

‘You embraced our fears and turned our despair into hope and our footballers into heroes. You improved us all.

‘You restored our pride, gave us joy and created precious memories that will last a lifetime.

‘And it was beautiful, Marcelo. And it will always be beautiful. Thank you.’

Ralph double-checked the text with the group who wrote it when the first draft of the message arrived.

“I wanted to make sure they realised there was no mention of Leeds in it and to make sure they hadn’t done that by accident,” he says. “Also, there was no ‘Bielsa’ — only ‘Marcelo’. But they’d thought a lot about it and they knew what they were doing. They knew he’d get it and they knew that people who’d followed Bielsa and Leeds, or been involved in that climate, would understand it too. 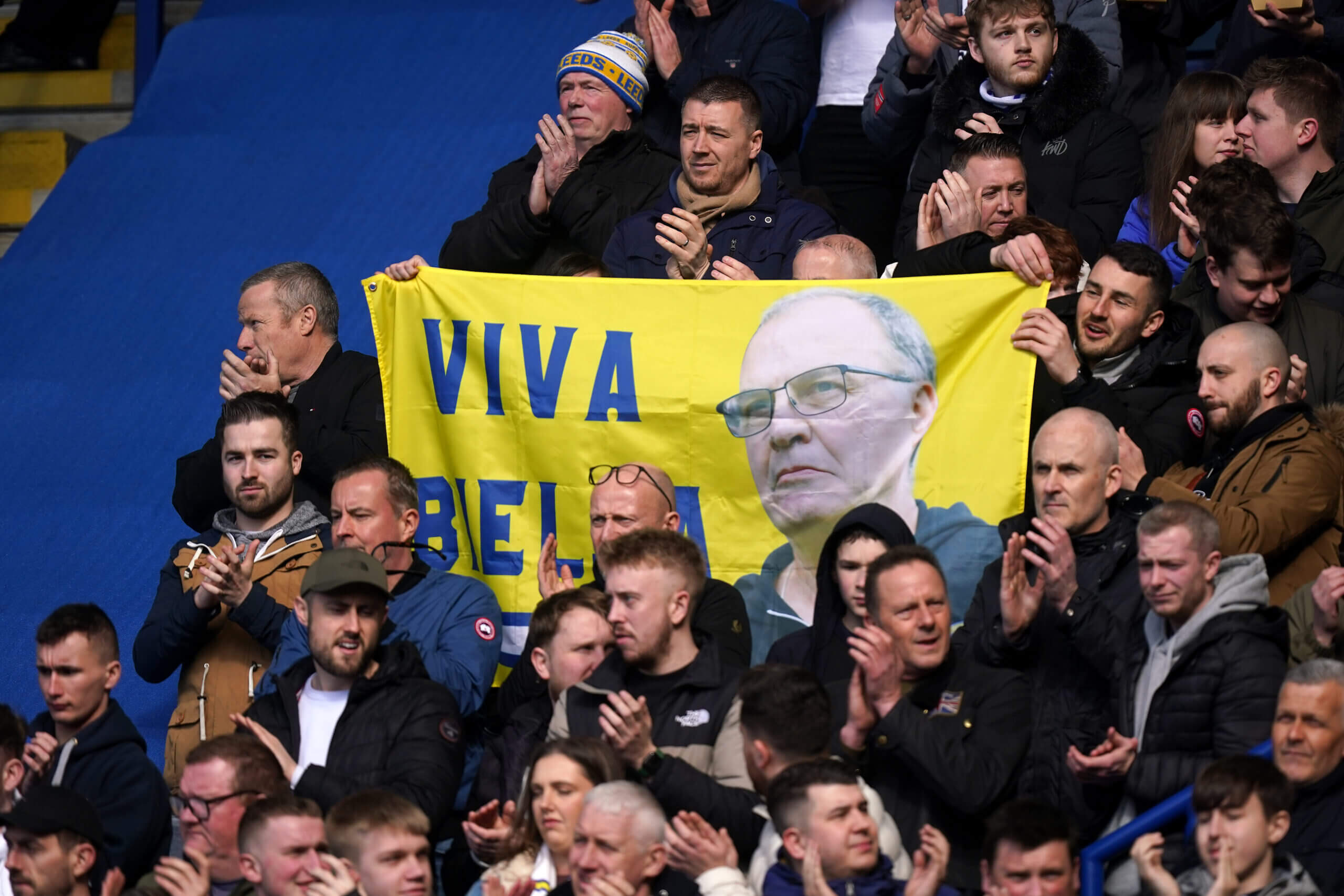 “The one thing they didn’t want was for their names to go with it or for any attention to fall on them as individual fans. They wanted the message to make the impact, which it really has.”

Radio 2, a station in Rosario, invited Ralph and Bloj onto their flagship morning show on Monday to speak about it.

“Outside of Rosario, people don’t know too much about La Capital,” Ralph says. “But at the weekend it was getting talked about all over the world. The guy who sold the ad got in touch to say that the news article is the most viral in the history of the paper. It brought them so much traffic and attention.”

In the UK, supporters started looking for ways to acquire copies of Saturday’s paper.

Bea Baguley, a Leeds fan based in England, had looked into sourcing one for her partner Jonathan and asked on Twitter if any other fans would like one sent from Rosario. By the close of play on Monday — a deliberate cut-off point set after a deluge of interest — she was committed to shipping almost 250 of them, with the help of a friend in Argentina. “And that doesn’t include the people who want more than one,” she says. “I’m an accountant by trade so I’m quite good at organising things but the response was much bigger than I expected.

“I’m seven months pregnant, so I’ve warned my husband that it might be him who ends up posting them out when they arrive! We were inundated with requests for them, which I suppose isn’t surprising when you think about it. The message was lovely and probably one of the nicest things that could have happened after the way (Bielsa) left.

“He did so much for us. I’m as much a Bielsa fan as anything these days.”

Bielsa has not responded publicly to the advert but he is understood to have been sent an image of it at least. “He’s famed for reading every newspaper cover to cover, and he’s got family and friends in Rosario,” Ralph says. “It’s gone everywhere in Argentina, so it was only going to be a matter of time before someone told him about it.”

It was gracias, and adios, to a light that will never go out.

The battle to avoid relegation to the Championship (and swerve an immediate £50million hit) is a three-way affair. Everton and Burnley take on Crystal Palace and Aston Villa respectively on