It has been 31 years and I still don’t think I am over Roger Milford. Nor do I expect that position to change any time soon.

Milford was the referee who took charge of the 1991 FA Cup final that haunted my upbringing as a Nottingham Forest supporter. It was Forest against Tottenham Hotspur and probably the kindest thing that can be said about a pumped-up Paul Gascoigne is that he was desperate, absolutely desperate, for his team to win.

His first challenge involved embedding his studs into Garry Parker’s rib cage. Soon afterwards, he scythed into Gary Charles with all the subtlety of a sledgehammer. It was so reckless that Gascoigne injured himself in the process and Milford decided it would be pretty miserable, cruel even, to show him a red card. Spurs were saved from playing 75 minutes with 10 men. They won 2-1 and Milford has never seemed to understand that his refereeing might have been part of it.

I know this because, a while back, curiosity got the better of me and I asked Milford if he would be interviewed for a piece to mark the 30th anniversary. I wanted to know if it was true that he spared Gascoigne a red card out of pity and, as was always the rumour, because he had a soft spot for him off the pitch.

He felt sorry for Gascoigne, he explained. He mentioned another Spurs player had told him afterwards that, mentally, Gazza was “gone, absolutely gone” even before kick-off. He talked about his own performance in glowing terms and it was unmistakable pride in his voice. But did he not regret applying the rules? Not one bit, he said. “Me and Gazza, honestly, we used to have a laugh. He was a nice kid. Everybody got on with Gazza.”

All of which is a roundabout way of saying that I know what it is like to let a grievance fester over many years. It is part of being a football fan. It is unshakeable and, if you devote yourself to a team, you come to learn there will be a certain number of these moments over your lifetime. These are grievances that can last decades.

How I feel about 1991 is roughly on a par, I imagine, with how Chesterfield’s fans remember David Elleray for not realizing Jonathan Howard’s shot had crashed off the underside of the crossbar and landed behind the goalline when the third-division club were trying to make FA Cup history in an infamous 1997 semi-final against Middlesbrough.

Liverpool’s supporters of a certain generation will remember Pat Partridge awarding a penalty for Phil Thompson’s trip on Forest’s John O’Hare in the 1978 League Cup final when the offence was a couple of feet outside the area (“With a surname like mine,” the referee acknowledged, “I’m there to be shot at”).

For the grudge-bearers of Leeds United, it is the name of Ray Tinkler that can whip them into a froth of moral indignation. Tinkler was the referee when title-chasing Leeds played West Bromwich Albion late in the 1970-71 season and a goal prompted the BBC commentator, Barry Davies, to declare: “Leeds will go mad. And they have every right to go mad.”

The referee had allowed Tony Brown to set up Jeff Astle even though the linesman was flagging for offside. Leeds lost the league to Arsenal by a single point and Elland Road was closed for four games at the start of the following season because of the reaction of the players and fans.

“There are people who still bear a grudge,” Tinkler, now in his 90s, recalled in a 2009 interview. “I was a farmer and used to sell potatoes in the Barnsley, Leeds and Rotherham area. There was one man who’d come to me and say, ‘I’ll have some of that bastard referee’s potatoes’. I used to charge him a fiver-a-ton extra for calling me a bastard.”

Moss was refereeing for the final time in a 34-year career and, in the process, he turned down what looked suspiciously like two penalties committed by forest players. Huddersfield have asked for an explanation from the Professional Game Match Officials Limited (PGMOL), the organization in charge of the referees, and it is probably no coincidence that Moss’ record shop in Leeds has suddenly received a load of one-star reviews online. Football fans can be a vengeful lot when they feel wronged. Depressingly, Moss has had to call in the police because of threats to his safety.

Do Huddersfield have a legitimate grievance? Well, yes, of course they do. Promotion to the Premier League is said to be worth about £200 million. But what price the prestige and glory? Of course they are entitled to be aggrieved. Of course they want to rage.

At which point you might have to forgive me for saying that I know from experience it hurts like hell but, ultimately, it would be disingenuous for me — with apologies to my friends in Yorkshire — to say I wish it had been any different. Every Forest fan I know has spent the last week drunk on euphoria. Does it make it any less wonderful that it involved a bit of controversy and a hefty dollop of good fortune? I would be lying if I said it did. Some might argue, in fact, that it makes it even better.

That, I appreciate, is not the noblest approach and nor is it what Huddersfield’s fans probably want to hear. But this is the thing about football fans: deep down, we all have elastic principles when it comes to referees, VAR and moments of controversy. If the luck is on your side, you are gratefully take what you are given. You are glad that it is not your turn to suffer. Because you know that next time it might be — and that it is no fun whatsoever to be in that position.

If anything, it has been strange to see how everything has escalated this week when, at the time, it didn’t feel like there was any great controversy attached to Forest’s victory. 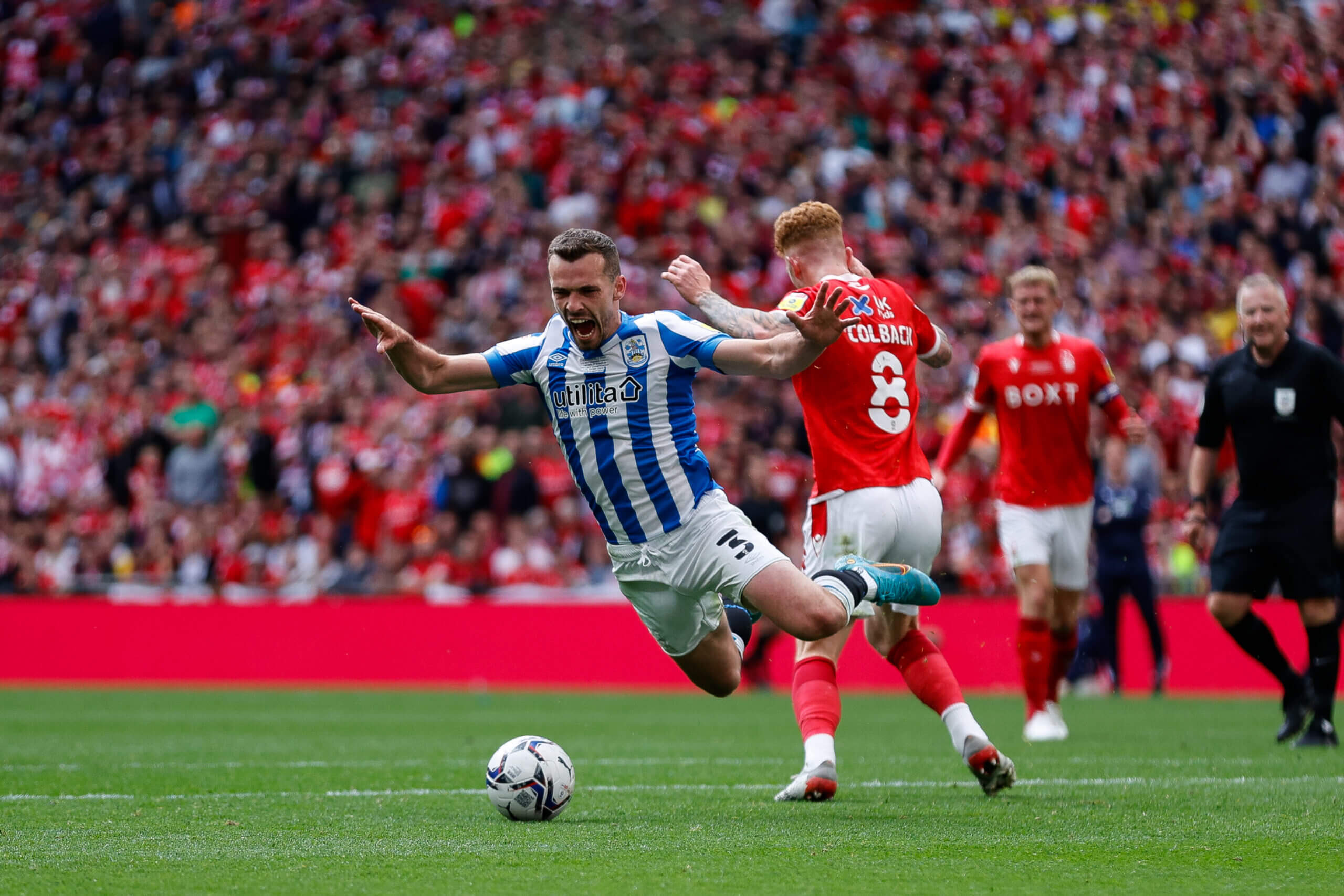 That was largely because, inside the stadium, we were not shown the VAR replays that were beamed to an audience of millions watching from home (just think about that for a second: what other sport would deliberately keep it away from the paying spectators?) . Everything happened very quickly and there did not seem to be any real outrage when the screen flashed up that it was not a penalty. The game moved on. Forest held on to their 1-0 lead and it was only afterwards that it became apparent we were going to hear a lot more about Jack Colback’s challenge on Harry Toffolo and, later, Max Lowe on Lewis O’Brien.

Maybe you have seen those video clips of Joe Worrall, Brennan Johnson and Joe Lolley in the beer garden of a Nottingham pub, enthusiastically joining in with a chant of, “It was a pen, we’re in the Prem.”

Perhaps you heard Steve Cook’s victory from the balcony of Nottingham Council House when Forest’s center-half stared down speech at a sea of ​​red and it became clear that the winning players knew they had got lucky.

“We’ll thank Jon Moss today,” he said, microphone in hand, to loud cheers. “What a fucking guy! We love VAR! We love it!”

The indignities have stacked up for Huddersfield and, plainly, attitudes have hardened. Let’s be honest, they are entitled to think they have had their noses rubbed in it.

All the same, it isn’t easy to know what they hope to achieve by lodging a complaint about Moss and Paul Tierney, who was watching from VAR headquarters.

We already know, after all, the difficult truth: that some referees are better than others and, though the PGMOL will never admit this, that there is evidence to suggest Moss was perhaps too accident-prone to be put in charge of a play- off final. But where do you take it? Where does it go?

Huddersfield, it is said, are keeping all options open, which sounds vaguely like they might be considering legal action. But, come on, referees and their assistants have been making mistakes since football was invented, the same as managers, players and everybody else associated with the sport. It doesn’t wash that this could go any further. Far more likely, this is just the losing team, angry and exasperated, wanting to make their point and let off a bit of steam.

Something similar happened a few weeks ago, incidentally, when Forest went to Bournemouth, in the final week of the Championship season, for what was described as their biggest match of the 21st century. Both teams were fighting for automatic promotion and, at 0-0, Forest were denied a clear penalty. Bournemouth won with a late goal and the referee, Stuart Atwell, apologised afterwards to Steve Cooper, the losing manager.

It’s sport. This is what can happen sometimes. And, yes, it can wake you in the middle of the night in a cold sweat.

“Roger Milford,” Nigel Clough replied, with barely disguised anger, when I asked him a few years back for his memories of playing in the 1991 FA Cup final. “I’m still absolutely flabbergasted.”

Clough always held a grudge. So, presumably, did his father, Brian, bearing in mind it was the one trophy that always eluded him. And so did every Forest fan I know who remembers the experience. “We always get shit refs,” goes the song. But it is actually the same for everyone, and there are some extremely good referees, too. It is a wild graph of exhilarating highs and excruciating lows and, in a strange way, it is part of what makes this maddening sport so addictive. I just don’t expect any Huddersfield fans to agree.

The Premier League returns this weekend with one point separating the top two, Everton looking over their shoulders at the relegation zone and the race for the final European places