Attacking centrally and ‘100 to 70’ when it matters: How Leeds counter under Marsch

More than once on Saturday, Illan Meslier stood on the edge of Leeds United’s box with the ball in his hands, weighing up a quick throw-out. Elland Road wanted the goalkeeper to launch it but Meslier resisted, stirring a few grumbles at the stands.

The urge to see Leeds counter at breakneck speed registered with Jesse Marsch and Meslier could hear it too, but head coach Marsch was happy to see Meslier stick to the plan.

“We have a term we call 100 to 70,” Marsch says. “It means that in certain moments, I want the players to slow down a little — not always physically but in their heads, too. Have a little bit more poise and control in how we construct the next play.”

The speedometer dipping to stop everything raging at 100 miles an hour is, Marsch admitted, contrary to the intensity Elland Road looks for. The pressure on Meslier to let the ball go was indicative of a crowd who were indoctrinated for almost four seasons by a style of football where intensity never dropped. Breaks in play were not for Marcelo Bielsa. He valued speed of thought and he valued footballers he could educate to make complex patterns of play look natural.

Speed, nonetheless, is central to Marsch’s plan and at the crux of how Leeds intend to attack with him as head coach. A change of manager at Leeds, particularly replacing one as ingrained as Bielsa, inevitably focused attention on how the team’s identity would change alongside it. It was easy to define a Bielsa side, for anyone watching a game or reading about him. The core traits of his tactics were extremely pronounced and incredibly specific to him. One of his successor’s immediate tasks at Elland Road was to explain what a Marsch team is and what a Marsch team is about.

The answer, in an attacking sense, appears to revolve around transition. Just as he did at Red Bull Salzburg and RB Leipzig, his two previous jobs in European football, Marsch has placed a heavy emphasis on counter-attacking at Leeds, employing it as the method of going forward and creating chances. He described Saturday’s match as “the best counter-pressing game for us by far” — the art of regaining the ball as soon as it is lost — but it was also the most active Leeds have been in transition since Marsch’s first fixture as head coach , a 1-0 defeat to Leicester City on March 5.

In the month since then, it has not been easy to visualize exactly how Marsch wants Leeds to look next season with the benefit of pre-season and a full summer transfer window behind him.

His initial 4-2-2-2 system has shifted to something more like a 4-2-3-1 (as shown by the average graphic position below from Saturday’s meeting with Southampton), a switch that concerned about a lack of width , and also how the mayhem of the club’s wins over Norwich City and Wolverhampton Wanderers deprived parts of those games of continuity and shape. But Southampton at home was a more settled contest and, as it went on, a pattern of transitional attacks was clear to see — a deliberate and rehearsed tactic.

Bielsa’s Leeds, ironically, could counter-attack like the best of them. Yet their quality in transition, especially in the Championship, wasn’t merely what Bielsa spent most of his time training them to do. He liked “turnover ball” but he also liked to win it a long way up the pitch, and Leeds maintained a high position on the field by dominating possession and pinning opposition sides into the final third.

Under Marsch, Leeds are continuing to edge possession in most of their fixtures but there is no longer the same devotion to it seems — and while Bielsa’s tactics sent so much ball out wide, their attacking play under Marsch focused on more central zones.

Analysis of Marsch in Austria and Germany indicated that one of his main instructions was for balls at turnovers to progress upfield at pace. His thinking was that in being direct, maximum advantage could be taken of opponents who were struggling to regain their defensive shape. A month on from his appointment in England, Leeds are already in that mindset: coached to break and go as soon as an opposition move breaks down.

It created several good attacking positions against Southampton without generating a glut of goals. More precision and clear thinking at the end of those attacks might be where Marsch’s “100 to 70” mantra comes in.

In this sequence, from in the early minutes of the game last weekend, Leeds can advance from the edge of their own box to within eight yards of Southampton’s goal in all of 11 seconds. In that time, the move involves an interception from Liam Cooper and three passes to send Dan James beyond Southampton’s defence. The distribution is progressive and Leeds gravitate towards the center of the pitch, using that area to pick Southampton open and to break out of a defensive situation. 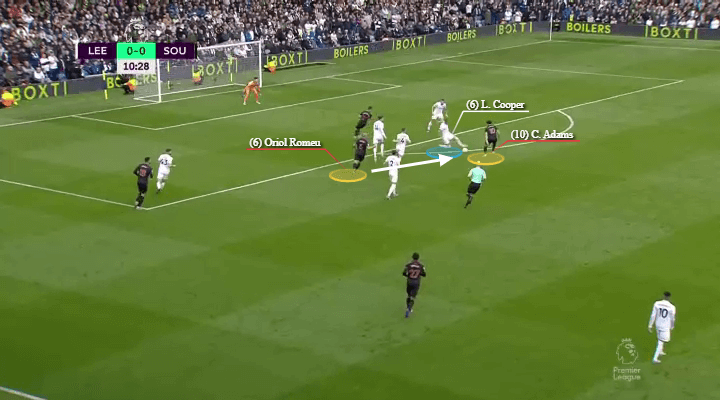 The turnover itself, with Cooper reading a square ball from Oriol Romeu to Che Adams, leads to a swift reaction as Luke Ayling picks his head up and spots players sprinting forward in front of him. The pass he chooses is to Jack Harrison (below) but Rodrigo is available too, no more than 10 yards away and already on the move. Raphinha, meanwhile, is on his toes in anticipation of a subsequent pass reaching him down the right. The effect is like dominos as Ayling takes out one line of Southampton players and Harrison’s ball to Rodrigo takes out another. 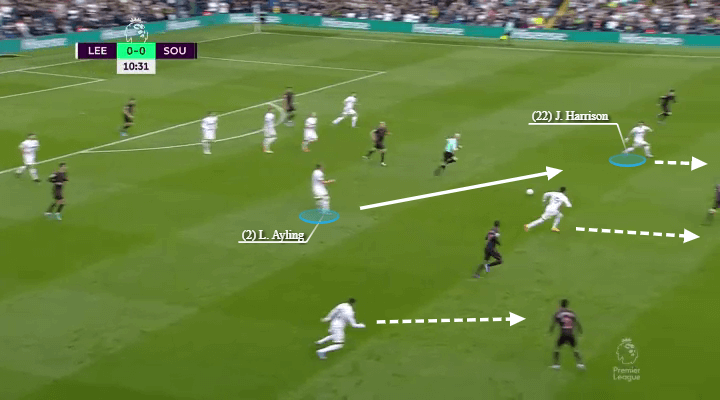 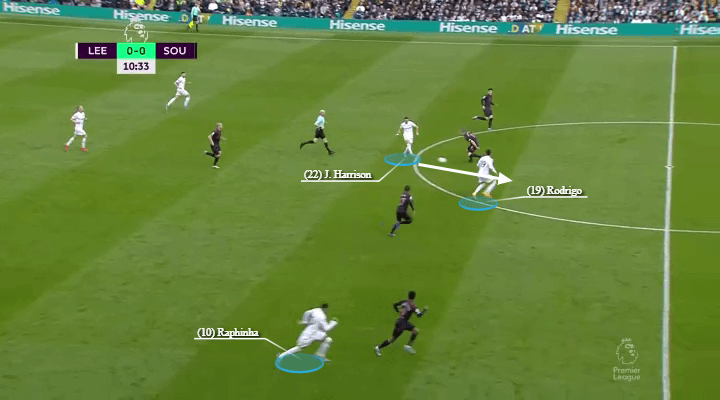 In the center circle, Rodrigo has two options to aim for — James through the middle or Raphinha on the flank.

Had James finished the chance, a shot Fraser Forster saved well, it might well have led to a VAR check for offside against the Wales international but the move demonstrates how Marsch’s Leeds will hunt for goals. “With this style of play, we’ll always be able to create chances,” the American said. “It was a step in the right direction.” 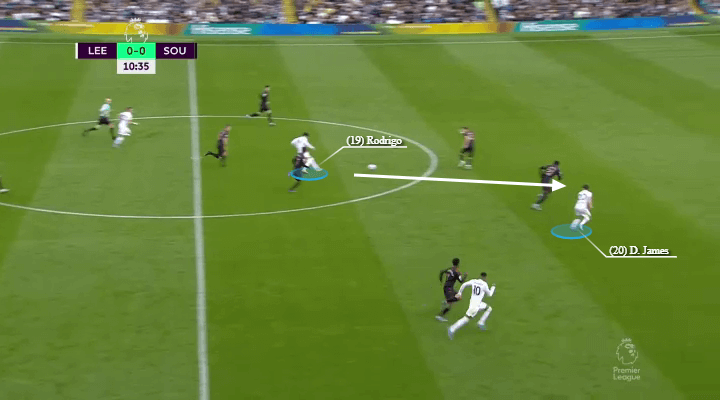 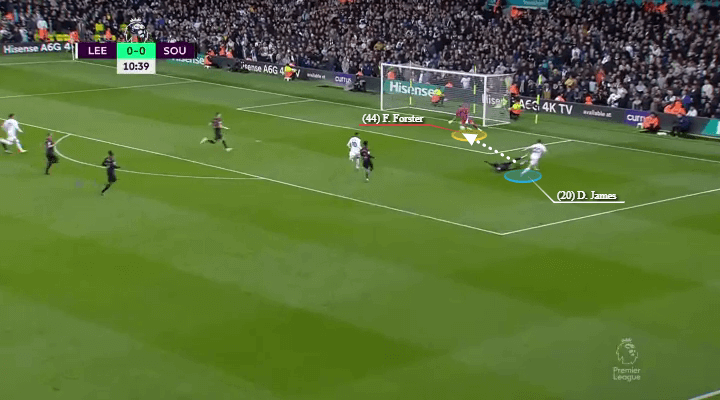 On Saturday, Leeds were willing to look for these opportunities from deep and in scenarios where Southampton were posing a threat.

Those second-half chances (graphics below) begin with Southampton miscontrolling the ball in Leeds’ box and inviting Diego Llorente to clear. Llorente opts to pick out Raphinha with a cushioned pass to the right rather than concede possession by drilling a long clearance downfield. 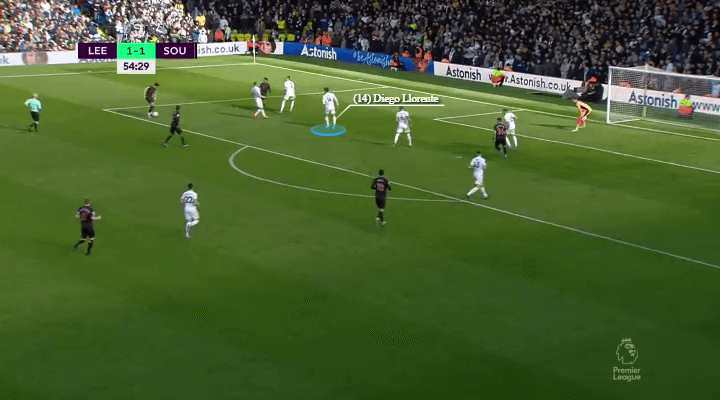 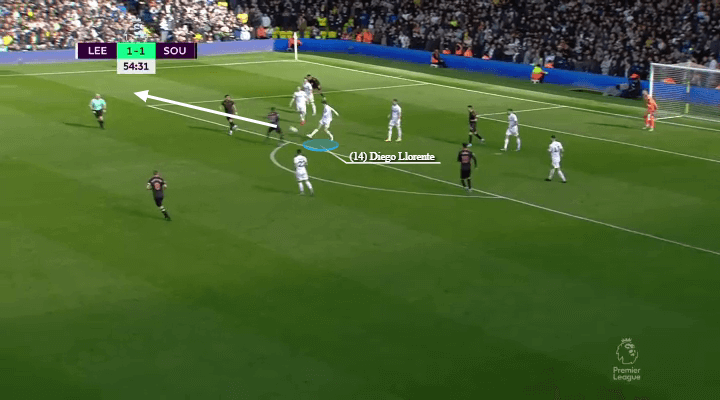 One touch to bring the ball under control was all it took for Raphinha to bring Rodrigo into play with a pass around the corner. As before, Southampton are in trouble, even though they outnumber Leeds. Romeu is flatfooted and Rodrigo is about to run away from him. Romeu tries and fails to grab his shirt, and Leeds go two on two. 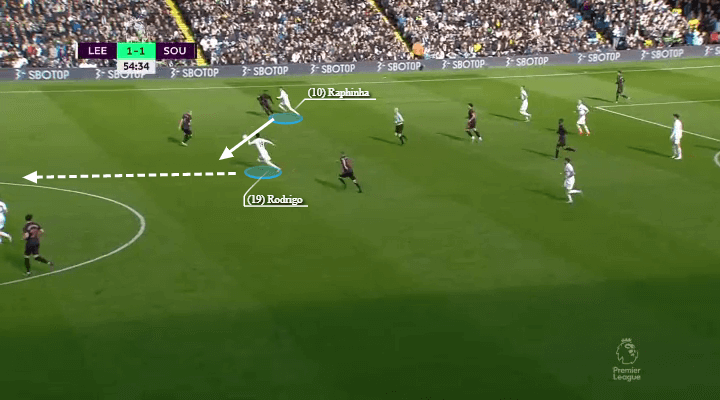 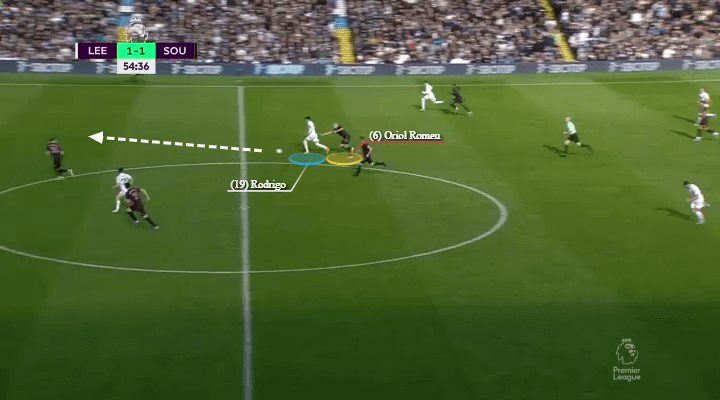 Rodrigo’s form has been encouraging in Marsch’s short time as head coach and there is, unquestionably, a natural understanding between the Spanish forward and Raphinha.

As Rodrigo pushes wide, Raphinha comes off the wing and makes himself available on the very edge of Southampton’s area. Raphinha’s chipped shot over the crossbar is a waste of a very good chance, with Southampton failing to adequately mark anybody. 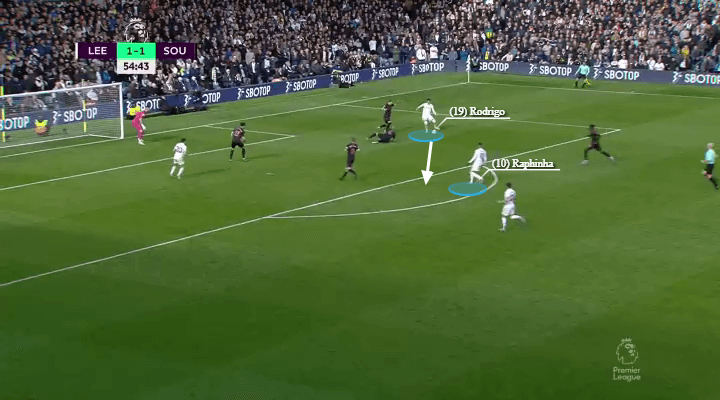 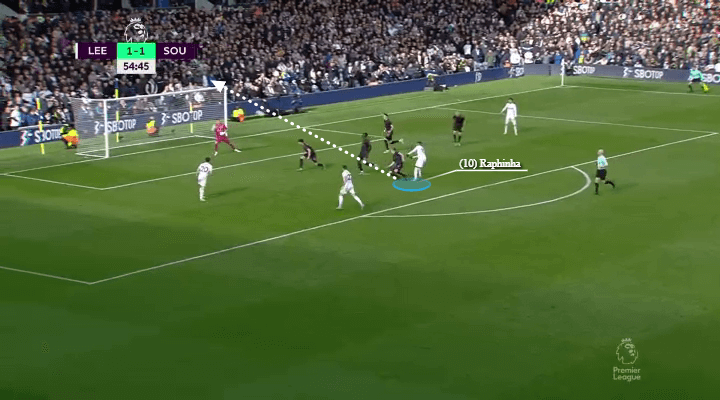 Between a front four of Rodrigo, Raphinha, James and Harrison, Leeds had the pace they needed to make their transitional plan work. It is also obvious that they are reliant on high-flying full-backs, one of the key aspects of Bielsa’s system. What Leeds lacks with James up front, though, is a player with the instinct to finish prolifically. Southampton were lucky in the first half to get away with a poor pass that allowed James to turn and disappear over halfway with runners on either side of him.

What begins with a Southampton throw-in ends with Ralph Hasenhuttl’s team on the retreat as James cuts through the middle. 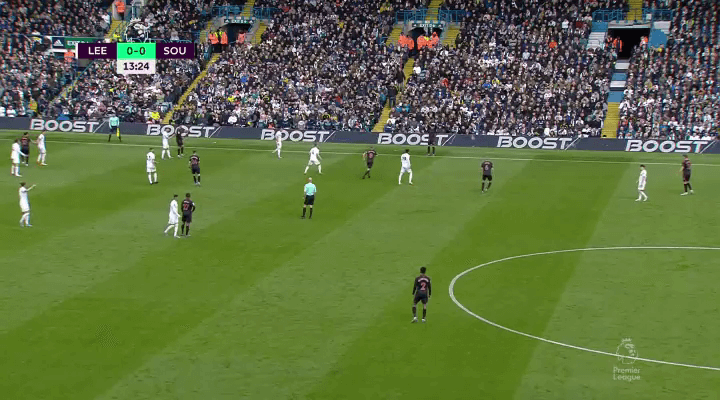 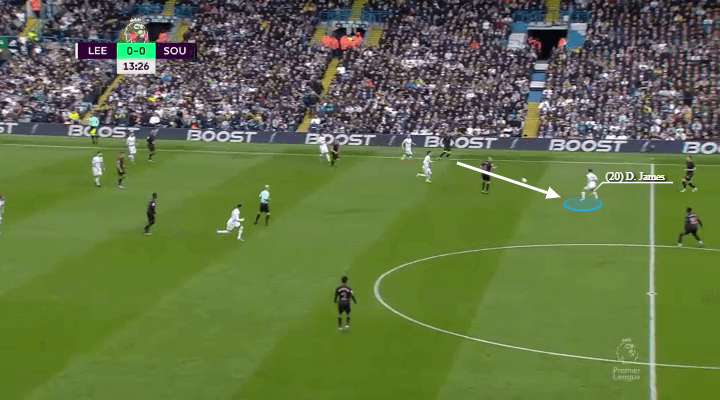 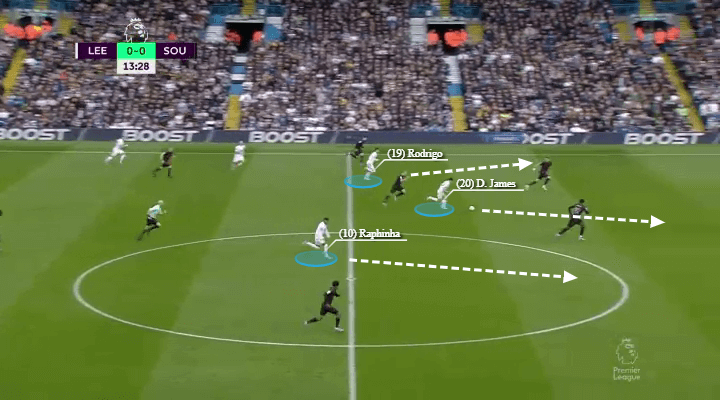 James carries the ball over 30 yards and has the perfect opportunity to slip in Raphinha, but he fails to pick the pass when it has to be made and Southampton dispossess him as an unmarked Raphinha looks in vain for a delivery.

It was an attack that should have led to a goal, let down by the wrong decision at the crucial moment. 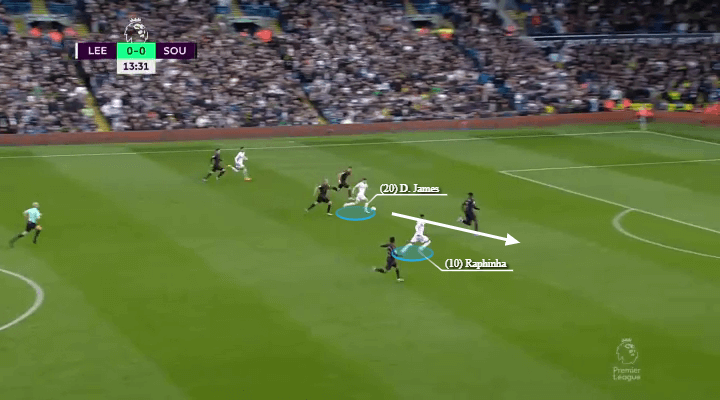 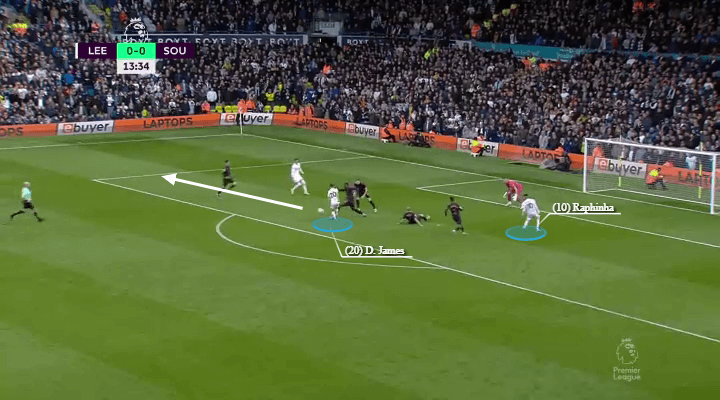 The goal itself, scored on 29 minutes, was slightly less direct than several of the other counters but it relied on the same principles.

Armando Broja wants a foul for the challenge by Cooper that regained possession for Leeds on the halfway but referee Anthony Taylor waves away the appeal. Mateusz Klich’s first thought as the ball comes to him is again to send it forward through the center circle. 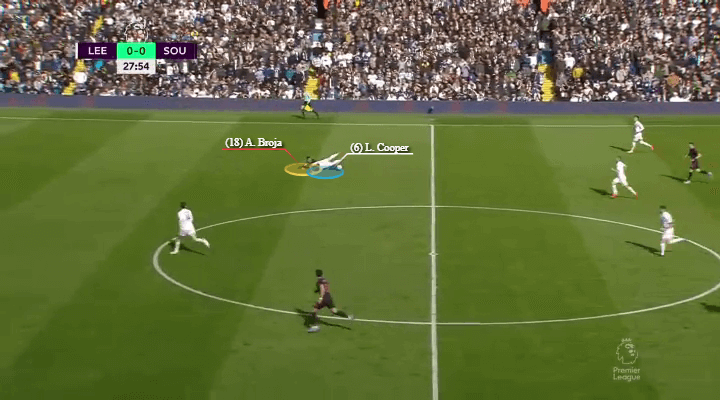 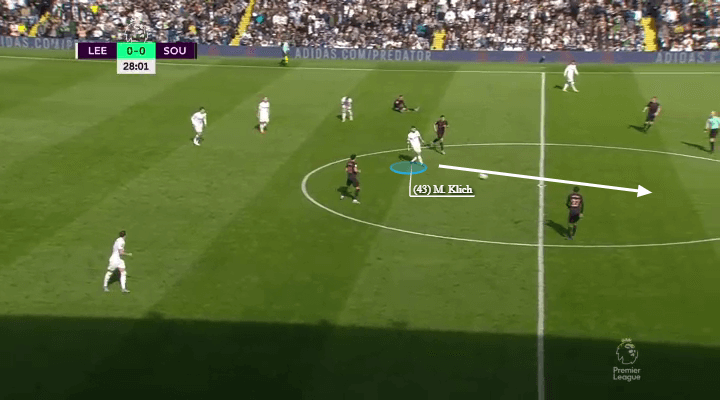 Klich then does what he did so often for Bielsa, laying a short pass off to Ayling, underlapping beyond Raphinha, and working himself into a gap on the right wing where he can look to take up possession again. 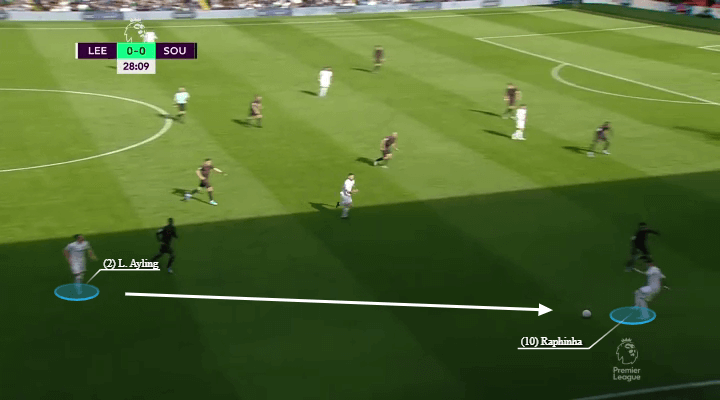 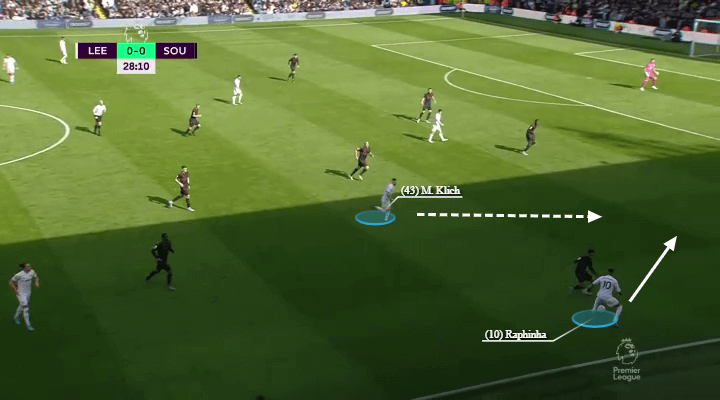 As the attack develops, Raphinha needs a bit of luck to break through a group of defenders in front of him but the effect of Leeds attacking proactively has been to leave Harrison completely unmarked in the middle. No Southampton player is paying attention to him as he runs in and makes the most of a weak attempt by Fraser Forster to claw Raphinha’s cross clear, prodding a shot over the line. 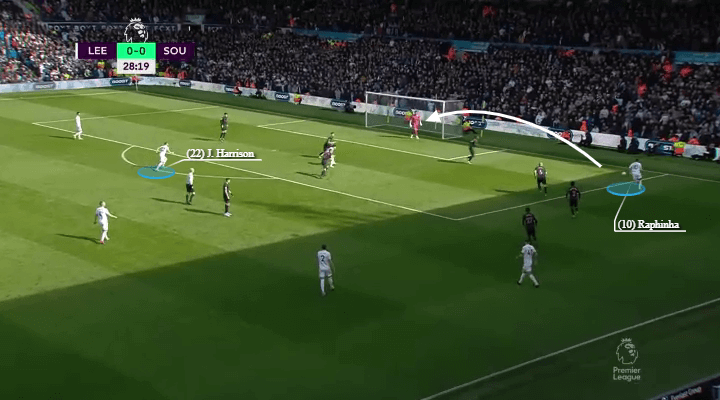 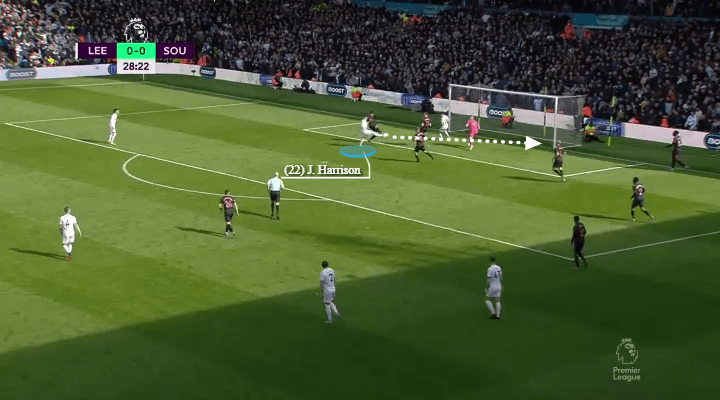 Marsch said afterwards that a 1-1 draw showed him “the clarity of what we want the game to look like”, though it was hard to deny that in the periods on either side of half-time, Southampton were able to assert themselves and emerge from a difficult first half-hour.

Structurally, Marsch is very much in the early stages of making his team function and it seems ever more apparent that the coming transfer window will be crucial in creating the right balance of squad for the style Marsch wants to play. In midfield and at No 9, the dots are not yet joined up.

In an attacking sense, however, it was plain to see what Leeds were trying to do and that Marsch had sent them out with orders to do it. “If we can find a way to make the last action cleaner or crisper, we’d have had more goals,” he said, and there was no disputing that.

Expect more of these tactics as his feet get more settled under the table.

A year ago, Tom Lees was facing an uncertain future. Into the final few weeks of his contract at Sheffield Wednesday, he had suffered a season-ending ankle injury just as

My favorite would probably have to be Roberto Carlos, against France in 1997. Others might refer to Cristiano Ronaldo against Portsmouth in 2008, maybe Paul Gascoigne against Arsenal in 1991,