Analysing Europe’s free-kick takers: the good, the bad and the brilliance of James Ward-Prowse

My favorite would probably have to be Roberto Carlos, against France in 1997.

Others might refer to Cristiano Ronaldo against Portsmouth in 2008, maybe Paul Gascoigne against Arsenal in 1991, or draw from the back catalogs of David Beckham, Lionel Messi, Ronaldinho or Juninho Pernambucano.

Yes, we’re talking about free kicks. We love them — or rather, we love it when they fly into the back of the net.

It feels as though fans’ expectations are often quite high when you see a player line up a direct free kick but, across Europe’s top five leagues, the average conversion rate of a direct free kick has been just six per cent since 2016-17.

Just six times in 100 attempts; hardly a nailed-on goal and nowhere near the 78 per cent conversion rate of a shot taken from the penalty spot.

There isn’t a discernible pattern when looking at how the conversion rate changes across the leagues each year but it is interesting that Serie A just edges the highest success rate in the past five seasons. This is most likely to be skewed by the 2017-18 season, which saw nine per cent of free kicks in the Italian top flight nearly converted — the highest rate of any league in our sample period, and just higher than this season’s current rate of eight per cent.

Such an above-average conversion rate is likely to be little more than a quirk in the data, as we must remind ourselves that free kicks are a small sub-sample of the total shots taken within a game, and indeed across a season.

In fact, there is an overall downward trend in the volume of direct free kicks taken across the top five European leagues in recent seasons — although, interestingly, less so in the Premier League. 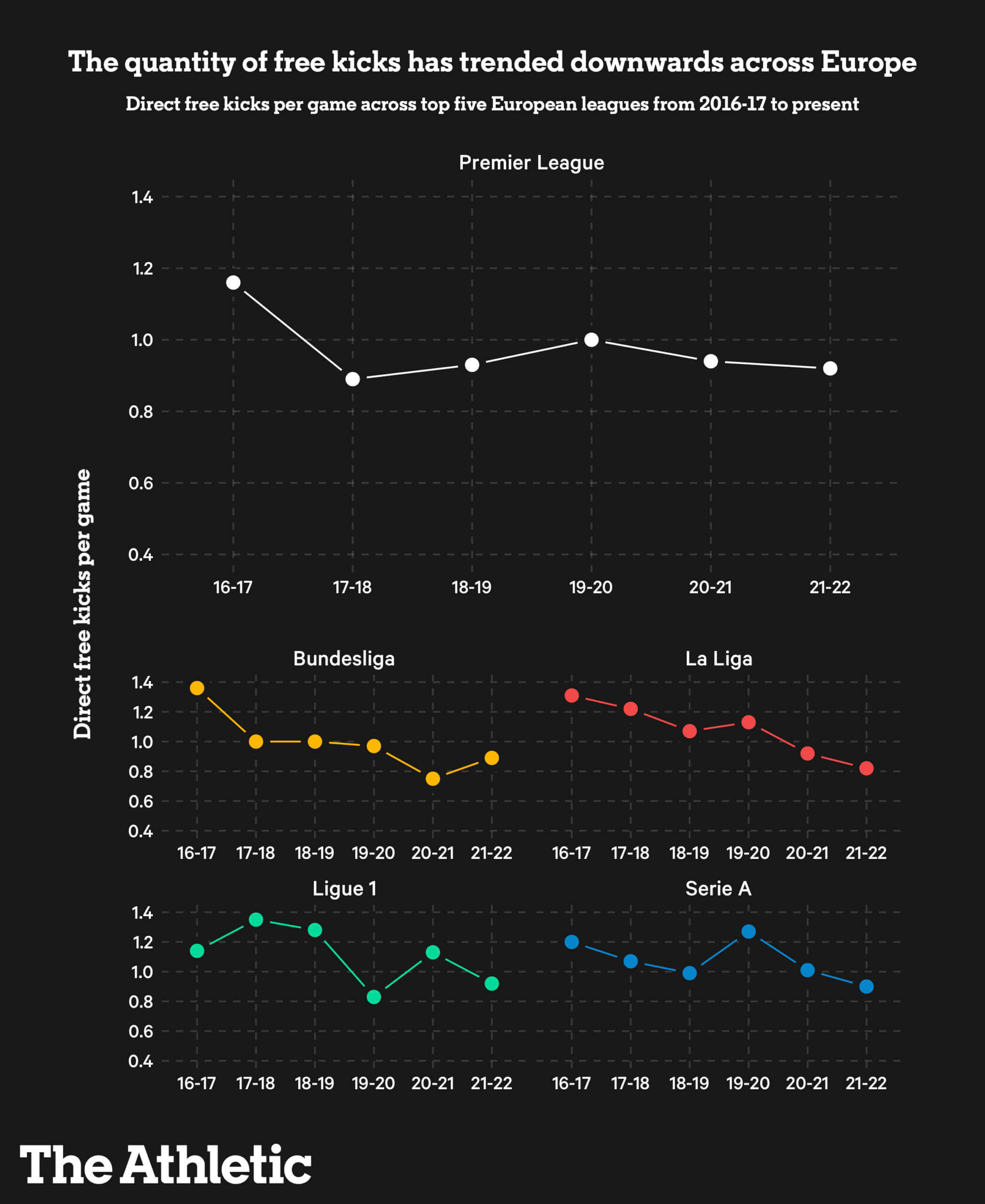 This trend may simply be due to fewer fouls being committed outside the penalty area to warrant a direct free kick. A slightly more biased explanation might be that the rise of analytics has influenced decision-making on the pitch, where clubs are more likely to encourage their players to work the ball into more lucrative areas than take a low-value shot from 35 yards out.

However you want to explain it, the volume of direct free kicks attempted per game is lower across each league when comparing this season — albeit it’s not yet complete — to 2016-17.

Despite the smaller sample size of free-kick shots to work with, we can still have some fun with the numbers and focus on a few points of interest.

Starting with the player who has scored the most free kicks in the last five years.

It will surprise very few people to know that title is held by… Lionel Messi. His 22 free-kick goals scored since 2016-17 is mightily impressive — and double the tally of James Ward-Prowse, his nearest competitor. 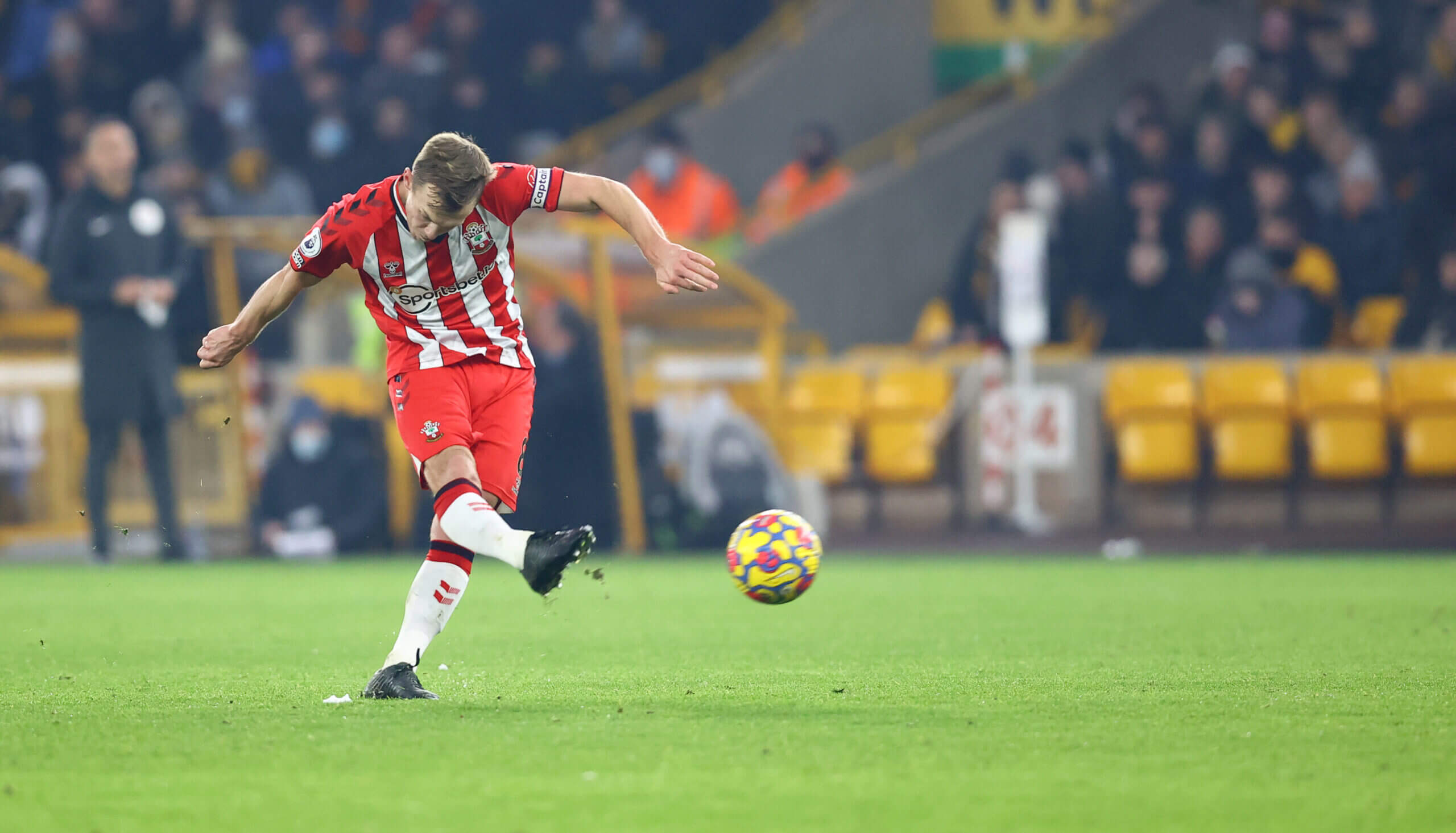 Of course, as the graphic below demonstrates, it must not be forgotten just how often Messi has picked up the ball in a dead-ball situation within that period. As the set-piece taker for a possession-dominant Barcelona side, the sheer volume of free kicks his old team have earned in our sample period truly dwarfs the opportunities taken by those around him. 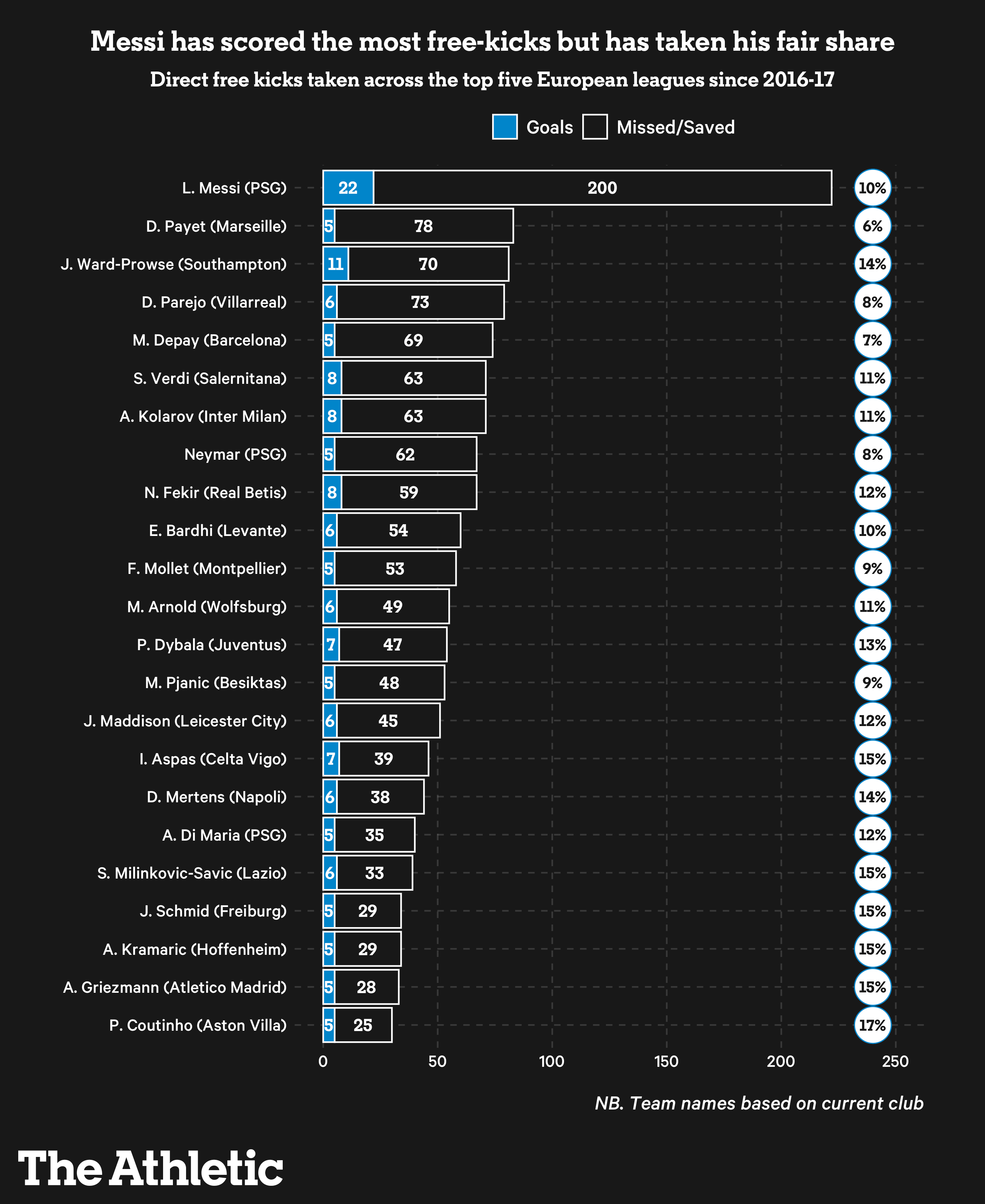 This is similarly the case for Salernitana’s Torino loanee Simone Verdi — whose eight goals were largely accrued playing for Bologna, who he left in the summer of 2018 — and Real Betis’ Nabil Fekir, who scored six of his eight league goals with previous employers Lyon .

Interestingly, the player with the highest conversion rate within this list is Philippe Coutinho, whose five free-kick goals — all of them scored in a Liverpool shirt before his January 2018 move to join Messi’s Barcelona — from 23 attempts gives him a stunning 18 per cent success.

Yes, the sample is very small, but it’s all just a bit of fun.

Messi’s 22 goals from a mammoth 222 free-kick shots still place him at an above-average conversion rate — just shy of 10 per cent.

Looking back as far as the 2009-10 season, we can see that the Argentinian has converted above average in 10 of the past 13 seasons — little surprise from one of the best players to have ever graced the game but still evidence of his remarkable consistency.

Six free-kick goals in a single season across two consecutive La Liga campaigns from 2017 to 2019 is a frightening return, which was followed up by a further five in 2019-20. 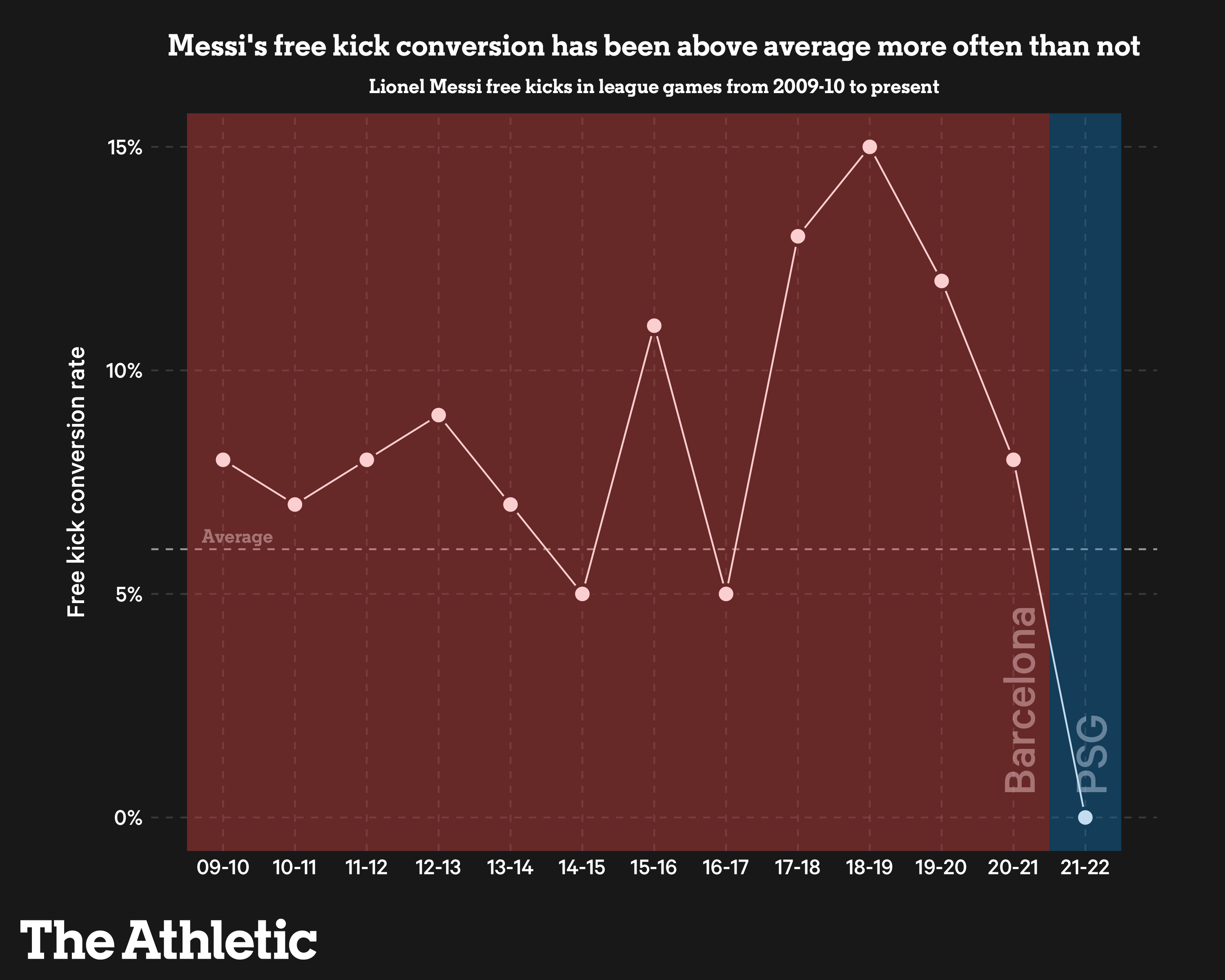 Thirteen attempts in a Paris Saint-Germain shirt have garnered no goals so far in 2021-22 and is perhaps emblematic of Messi’s difficult first season away from Barcelona. If he doesn’t score with a direct free kick over the remaining two months of this season, it will be the first time he has failed to do so in the league since 2007-08, which was just his second as a first-team regular.

Many will also notice that there is a certain high-profile absentee on the list of free-kick goalscorers above — Cristiano Ronaldo.

Ronaldo has scored 32 times in league football from direct free kicks across his whole career, which is certainly not to be undervalued, but even when adding in his free-kick goals in other competitions for clubs and Portugal at that time, his success rate in recent years has not been much to shout about.

Of course, there has been some good goalkeeping to thwart Ronaldo’s efforts along the way but the 37-year-old has scored just two league goals from a direct free kick since 2016-17 — his conversion rate has been below-average more often than not in the past decade. 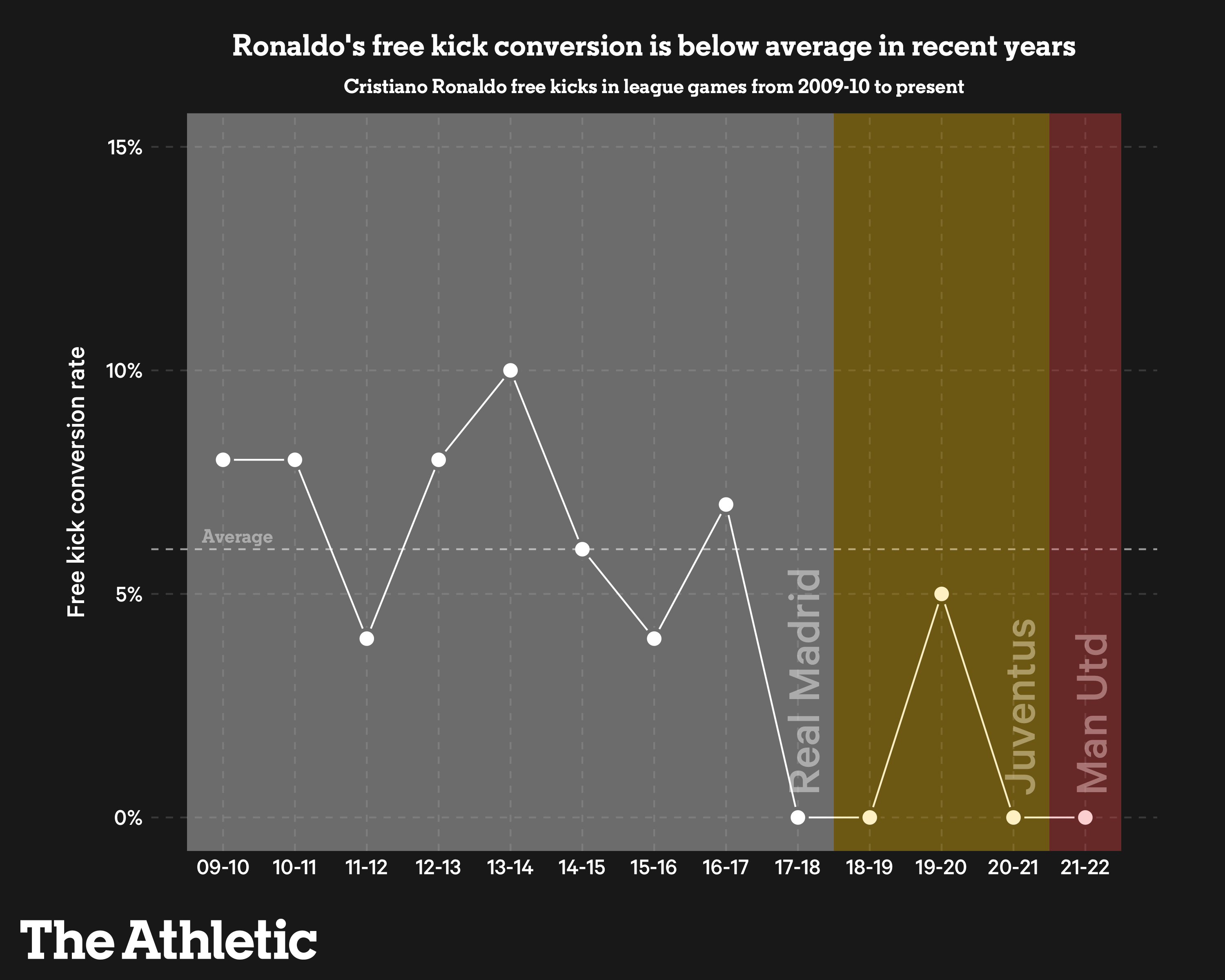 While it is true that Ronaldo has taken fewer free kicks in recent years — he hit 55 of them in 2011-12 — thinking that he still has the magic touch when placing the ball down outside the opposition box would be wrong, skewed by an availability heuristic of memorable examples in his past.

Bringing it back a little closer to home in the Premier League, its current best free-kick taker undoubtedly is Southampton’s Ward-Prowse — a title that Pep Guardiola believes should extend internationally.

“He’s the best taker right now worldwide,” Guardiola said before his Manchester City side’s recent game with Southampton. “There isn’t a better taker than Ward-Prowse. He’s so good at it that maybe you miss his quality as a player as well.”

Ward-Prowse will surely not argue with Guardiola, with an astonishing 53 per cent of his free kicks hitting the target since 2016-17 — well above the average of 32 per cent for a Premier League player in our sample period. 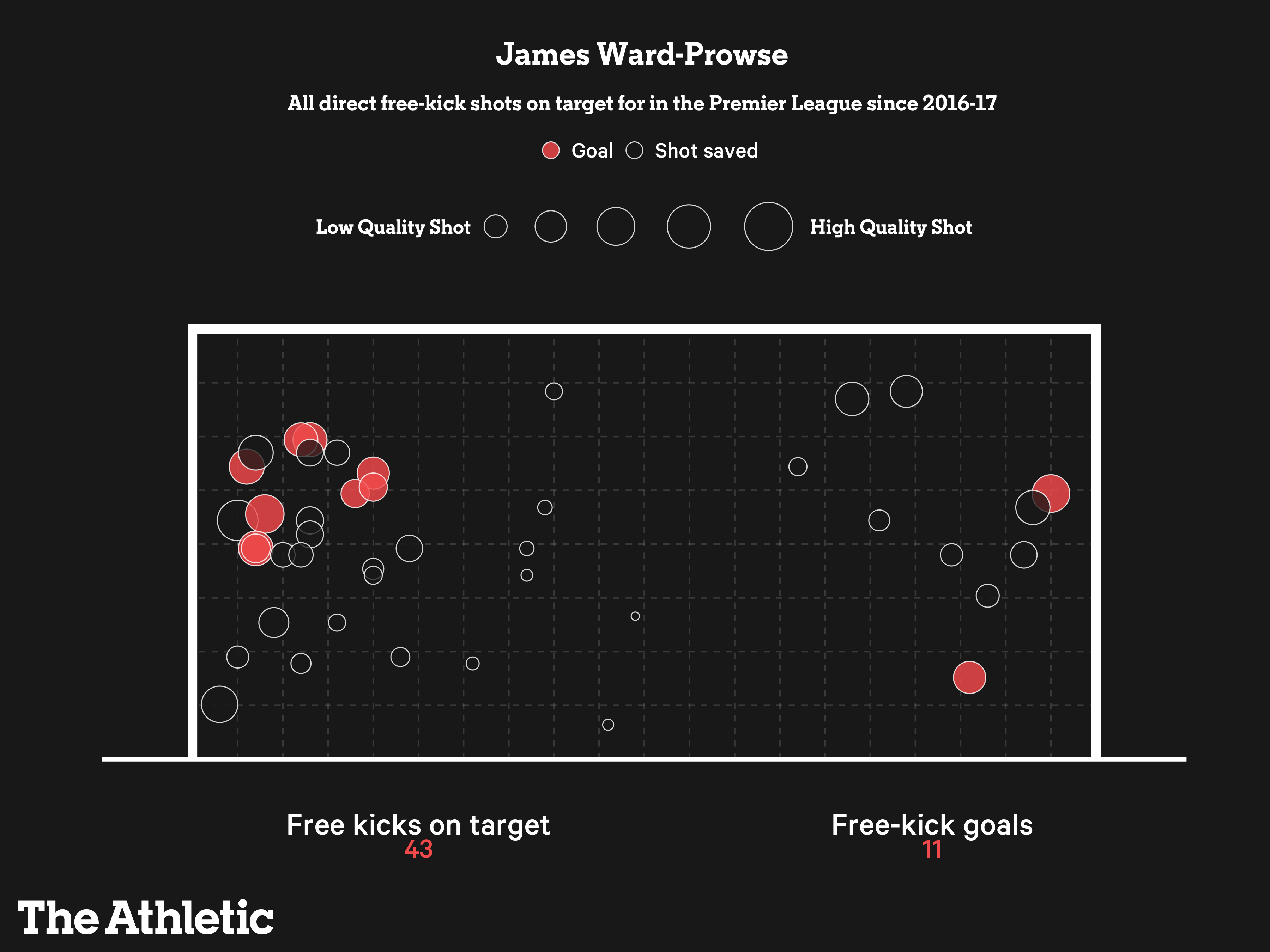 His 11-goal total is more than double that of his nearest competitor in the past five seasons and, as you can see above, Ward-Prowse favors the more traditional “Beckham bend” whipped to the goalkeeper’s right sidealthough his lesser-favored knuckleball strike was something to behold against Wolves in January.

Southampton captain James Ward-Prowse stepped up to score a sensational free-kick in the Saints’ Premier League defeating the Wolves.

Elsewhere, the six free-kick goals by James Maddison in a Leicester City shirt is the league’s second-highest tally across the past five years — with his goal against Brentford on Sunday breaking a tie with Coutinho. Maddison’s 12 efforts on target come from a total of 51 shots, suggesting his on-target rate of 24 per cent is not the most accurate in the wider sample, but when he does hit the target, there’s a good chance of the ball going in . 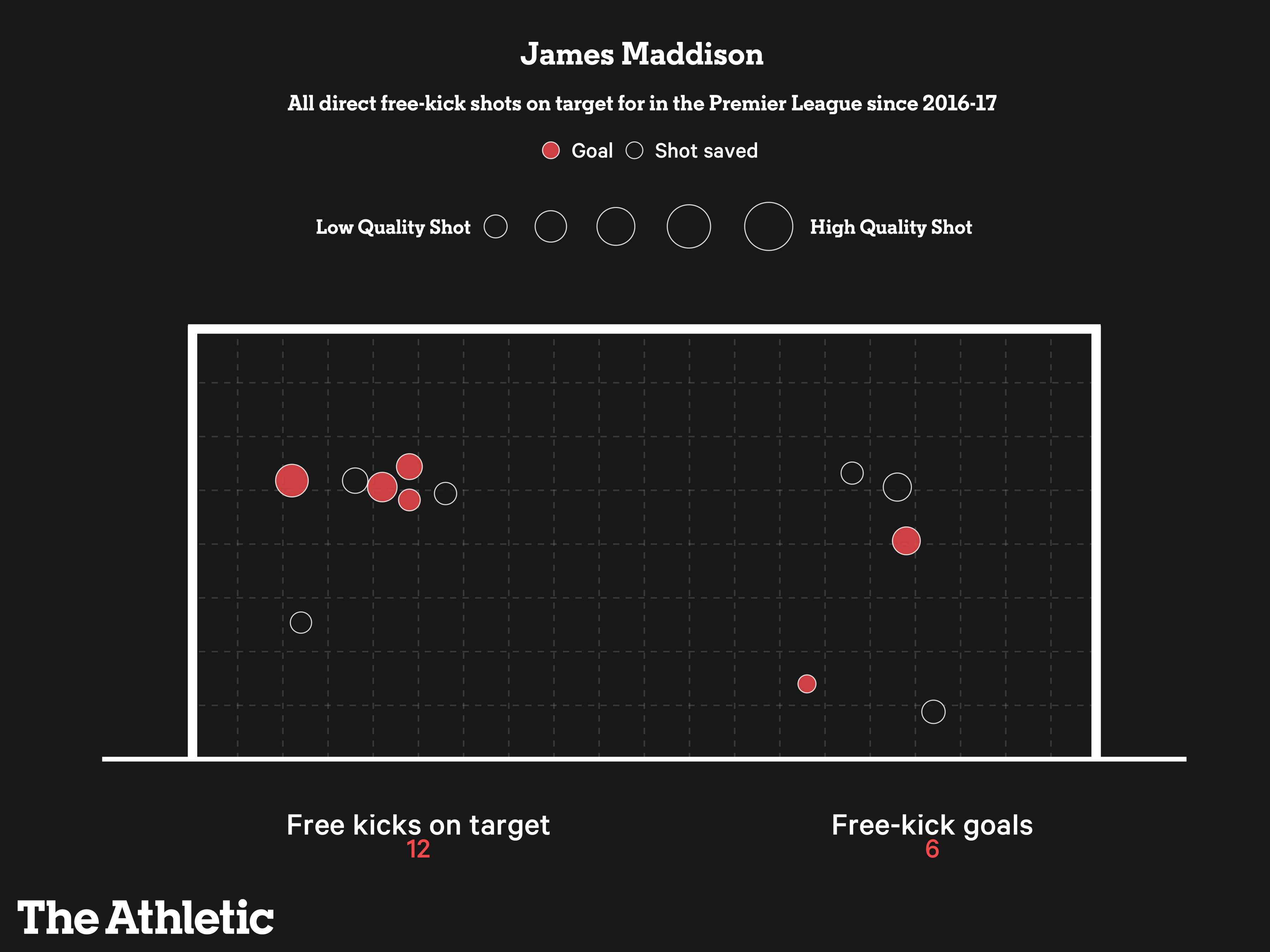 While it is unfair to spin a negative for a player with his quality, Harry Kane has the unwanted tag of the most free-kick shots taken (48) in the Premier League since 2016-17 without scoring a single goal.

53 – After scoring with his very first direct free-kick attempt in November 2014, @HK_Shhh has failed to score with any of his last 53 such shots in the top-flight. Since 2003-04, only Jay-Jay Okocha has taken as many without scoring more than once (54 each). Dreamers. #AskOptaJoe https://t.co/tf5rksaSPb

While his on-target rate of 27 per cent is far from the lowest, Kane has only worked the goalkeeper on 13 occasions when he has stepped up for a free kick in the past five years. In fact, the Tottenham striker’s only goal scored direct from a free kick was in November 2014 — and even that was a deflected effort that wrong-footed Aston Villa keeper Brad Guzan. 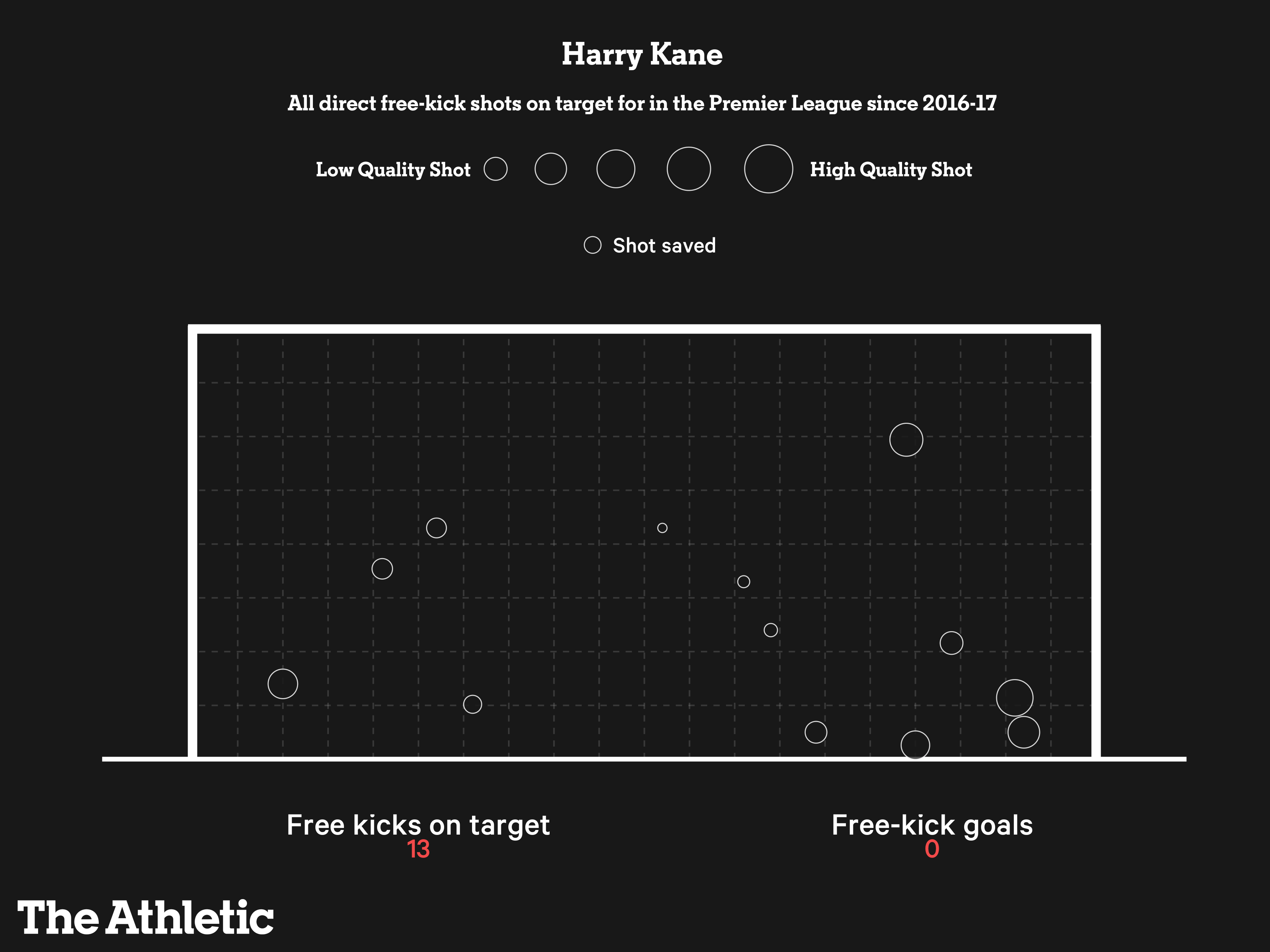 Kane will have largely shared free-kick responsibilities with Christian Eriksen at Spurs for much of this period but a player of his quality will no doubt back himself to improve upon such output when he next steps up to hit a set piece.

We could go on, as the discussion of free kicks brings endless joy, but maybe the next time you see your club’s set-piece specialist preparing to have a pop at goal, just remember that the likelihood of the ball ending up in the opponents’ net is not quite as high as you might have thought.

Before Leeds United’s game against Arsenal earlier this month, manager Jesse Marsch showed his team a quote from Mahatma Gandhi about having belief. But the influence of a man who